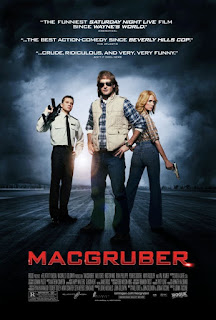 Night Live,” I was…skeptical. Don’t get me wrong, I love the sketches. The goofy take on an inept, troubled McGyver-type who ends up never saving the day is quite funny, but those sketches are about thirty seconds long. How does a thirty second joke translate into a ninety minute film? Surprisingly, quite well.
MacGruber works as a movie because it’s not just an overlong version of the sketch. The movie is really a parody of 80s action movies like the Rambo sequels. True, this has been done before (Hot Shots! Part Deux comes to mind), but never in such R-rated glory as this.
Yes, MacGruber is a bit dirty (when I saw it, two of the ten people in attendance walked out about thirty minutes in), but it’s all very goofy. There is gore and nudity, but I would call it stupid before I would call it offensive. But back to the parody aspect…
Your enjoyment of MacGruber is largely based on how schooled you are in the glory days of Stallone and Schwarzenegger. Sticking with the schooling theme, I consider myself a professor in the ways of the action heavies. Watching this film, I was reminded of elements of Predator, Cobra, and, well, anything else those two action stars made during that decade. This movie doesn’t necessarily make fun of those movies; it just exaggerates their elements to the point of hilarity. And if you’ve seen those movies, you know that exaggerating them is quite a feat.
So I dug the action references and the gross out stuff was just ridiculous enough to crack me up (though I don’t think I’ll ever look at celery the same way again), but that doesn’t completely make a comedy. The most important factor is the titular MacGruber. Thankfully, the more fleshed out thirty second character is quite funny. First off, he has the amusing look from the skits – mullet, tech vest, flannel – so he’s this walking 80s joke already. Add the character quirk of always having to remove his car’s tape deck (it’s a Blaupunkt!) and carry it around with him and that helps. Throw in the character trait of instantly offering sexual favors when things go wrong and it gets even funnier.
The character is great and Will Forte plays it perfectly. He handles the spoof aspect early on by constantly sporting the Stallone sneer during the first act. Then Forte hams up the screaming to the sky “dramatic” moments. And his smug, self-righteous delivery of idiotic lines is dead on.

The supporting cast works well, too. Kristen Wiig is amusing as MacGruber’s faithful sidekick. Val Kilmer seems to be having fun in the villain role, though the funniest aspect of his character is the dark story behind his rivalry with MacGruber. Powers Boothe channels Richard Crenna in the military leader role. But Ryan Phillippe is the most impressive and that is because he has the most important job in the film: he has to play it serious.
Phillippe plays Lt. Dixon Piper, who is the 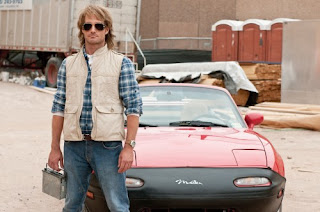 professional foil to the idiotic MacGruber. Movies like MacGruber, that aim to spoof, are only successful if there is at least one character who is taking everything deadly serious. If you don’t have that serious man, you have Will Forte cracking cheesy one-liners to Wiig for ninety minutes. Now, that would actually be slightly amusing, but it wouldn’t be truly funny. Phillippe is in there to say, “What are you talking about?” His reaction is the audience’s reaction and it makes everything MacGruber says much funnier than it has any right to be.
You may have noticed that I left out a plot summary on this one. That is completely intentional. Obviously, the plot is not important at all for this film. It’s a movie based on skit comedy, so it’s a film of moments, not a film of excellent narrative structure.
Those moments really made the film for me. There’s a strange side-plot in which MacGruber obsesses on getting revenge after being insulted by a passing motorist. He mutters the license plate number (KFBR392) like a mantra at first and it gets taken to the extreme later in the movie. It makes almost no sense but it had me rolling. Another moment would be the team-building montage in which MacGruber recruits a bunch of old mercenary buddies (all of them WWE wrestlers) and seals the deal with what I call the manclasp (a loud, manly clasp of the hands a la Predator). It reeks of the 80s and the result of it all is insanely funny. Oh, one final element that had me laughing…two words: throat ripping.
MacGruber is surprisingly funny and it gives me hope for future SNL movies (although I don’t think this one is going to make enough money to warrant future projects). Looking over this review I noticed that I make a lot of seemingly random references to the film that make almost no sense. I think that’s fitting for MacGruber, a film full of randomness. If some of the examples above just sounded stupid to you, you should skip this. If you find insane stupidity funny, then definitely get out and watch this. MacGruber is just dumb enough to be hilarious.
Posted by Eric Harris at 2:43 PM