"Prince of Persia: The Sands of Time"

Prince of Persia is just a bland mess of a film.

Prince of Persia: The Sands of Time, the latest videogame 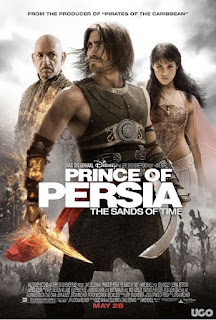 adaptation, is not likely to change anyone’s mind regarding the videogame-as-movie genre. I actually enjoy a few of the hated videogame adaptations, but this film was just a bland experience. It’s not terrible, but it’s certainly not consistently entertaining.
Prince of Persia takes place in, you guessed it, ancient Persia. But don’t expect some kind of history lesson with this film, especially since the majority of the cast do not even resemble someone of Middle Eastern descent. This was an issue I had after seeing the first preview. I wondered why an American actor was portraying a Persian prince with a British accent. To be fair, said character, Dastan, is an orphan, so it’s feasible that he is not of Persian blood. But what about Gemma Arterton, Alfred Molina, and Ben Kingsley, all of whom are British? Sure, Kingsley played Gandhi, so why can’t he be Persian, too, but it would have been nice to have an actor or two of honest descent to add a bit of authenticity. This may be a petty argument for some, but I know that other people have a major issue with it.
The casting isn’t very realistic and I guess that’s okay because the story isn’t, either. I’ll spare you a lengthy summary. The main points are that a prince, not of royal blood (Jake Gyllenhaal), is framed for a murder. He sets off with the clever Princess Tamina. Along the way he realizes she is protecting a magical dagger that can turn back time (hence the sub-titular sand). Of course, the dagger is a part of an issue that threatens the entire world.
The story wasn’t fantastical enough for me, though. I haven’t played many of the Prince of Persia games, but the ones that I did play featured a more supernatural plot. The Prince was killing strange sand demons rather than regular soldiers and “hasansins.” I wanted to see more creatures, especially since the fight sequences in this film were serviceable at best.
The enemies are not the only game connection that I felt was lacking. The Prince of Persia games have always been about the Prince jumping from ledge to ledge and swinging around as he makes his way through complex architecture. This film features a few moments that showcase the Prince’s abilities, but it’s not part of the film’s focus.
The focus is on the relationship between Dastan and Tamina, which is unoriginal to say the least. It’s the standard adventure love story we’ve been getting for decades. Man is forced to drag woman along for a journey. They seem to hate each other and constantly bicker. Then, against all odds, they realize they love each other. Only this film can’t stick to the formula. There is an overload of “near kiss” scenes and the relationship jumps back and forth from humorous to serious too often and too quickly. I don’t mind the banter between these two, but it should be more focused. Have them crack wise at each for the first half of the film, but get a bit more serious near the end.
Perhaps the inconsistent relationship wouldn’t have been so noticeable if it hadn’t been for the inclusion of Alfred Molina. He is here purely as comedic relief and I didn’t find him funny at all. He’s a sheik who puts on ostrich races (what?) and also goes from funny to serious multiple times and it never seems natural. I heard others laughing at his every word, though. He just seemed out of place to me, constantly spouting anti-government dialogue that felt out of place.
Molina’s complaints about taxes added a modern feel that I thought weakened the film. It didn’t help that part of the plot dealt with an army attacking a city based on faulty information concerning weapons. Hmm, going to war in the Middle East on the assumption of a weapons stockpile? Sound familiar? That’s the problem. I didn’t go into Prince of Persia wanting to see some thinly veiled statement on the war in Iraq. It doesn’t add up that a film that features so much goofy comic relief would have such a serious undertone.
But it truly isn’t all terrible. The production value is great. Persia is created in a visually interesting way and all of the sets were impressive. The camerawork is interesting at moments, as well. The acting is fine. The plot actually has a decent payoff, mainly due to the sequences that feature the dagger. It’s a shame there weren’t more scenes that put the time travel to good use because it is an amusing concept. It’s just that none of these positive points make up for the negative. They just make the film bearable and, occasionally, slightly enjoyable.
The best part of the film, though, is Jake Gyllenhaal. His physical presence alone may be enough for the more obsessive fans (mostly ladies) out there. Regardless of whether or not you find him sexy, it would be hard to argue that he can’t carry a film. He usually plays more awkward, borderline nerdy characters. This film proves that he can play the normal hero. I’m not sure if that’s a good thing, though, since his best performances (Donnie Darko, Zodiac) are awkward, nerdy characters.
I wanted a more serious, supernatural action film that was more like the videogame. What I got was an action-comedy that provided merely decent action and, more often than not, annoying comedy. Maybe my expectations were messed up. If all you want from this film is a buffed up Gyllenhaal flirting with a princess, then you’ll come away pleased. If you expect more from this film, you’ll walk out of the theatre like me, saying, “Well, that kind of sucked.”
Posted by Eric Harris at 8:44 PM