The Kurgan laughed right along with the A-Team through each crazy action scene.

The original “A-Team” TV show was a bit before my time, so I 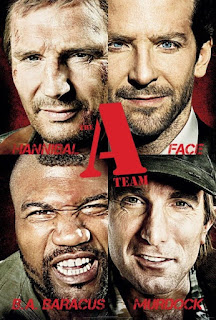 only know of the group of renegade commandos from the occasional rerun, but more so from the parodies of the show (an episode of “Family Guy” comes to mind). I’m pretty sure I’m the key demographic for this film, then, because the film gets so ridiculous at times that you might think it actually is making fun of the old show. This is not a bad thing. It just means that The A-Team is aware of what it should be: a crazy, fun action movie.
If you’re a fan of the old show, however, you needn’t be worried. There are plenty of references to the show to enjoy, including catch phrases, a certain member’s fear of flying, and an iconic van.
The A-Team is basically an origin story for the team. The beginning of the film shows how the four leads meet. Then it cuts to eight years later in Iraq, where the team has been very successful in covert operations. Then, just like the intro lines from the TV show state, the team is framed and sent to military prison, only to escape soon after. I’m not going to get into the whats and the whys of the story because…who cares? Stuff gets blown up and that’s all I need.
I also need some entertaining characters and this film comes through in a big way. There’s Hannibal (Liam Neeson), Face (Bradley Cooper), B.A. Baracus (Quentin “Rampage” Jackson), and Murdock (Sharlto Copley of District 9 fame). They are all very much one note characters: Hannibal puts the plans together and leads the group, Face is the reckless ladies’ man, B.A. is the tough guy, and Murdock is the crazy pilot. They all work together well and, most importantly, the actors truly seem to be having fun.
The fun factor is really important here because the action is so ridiculous. In case you haven’t seen the preview, let me summarize one particular sequence. The team steals a transport plane that is holding a tank. They get blown out of the sky, but they took shelter in the tank, which is parachuting to the ground. As they fall through the sky, Face opens up the hatch and mans a machine gun and shoots down the drone that shot the original plane down. And, believe it or not, it gets even more ridiculous after that, but you get the idea. What makes this scene okay is the fact that the characters realize how crazy the situation is. They are laughing the whole time and cracking jokes. The scene would be stupid if it was played with complete seriousness.
The actors truly seem to have such chemistry together that this film almost feels like a sequel. I was okay with most of the casting, though I thought Quentin “Rampage” Jackson was a bit too cheesy at times. On the opposite side of the spectrum, I though Sharlto Copley was great as Murdock. I really enjoyed his erratic performance. Neeson and Cooper were definitely well-suited in their roles, as well.
The supporting cast doesn’t have much to do, except for Patrick Wilson, who is very amusing as the smug CIA agent, Lynch. Jessica Biel is kind of sleepwalking through the love interest role, though all that’s asked of her is to stand around and look good, which she does well.
The actors make the movie fun and all, but this is still a film that lives and dies by its action set pieces. Aside from some frenetic, Tony Scott-type editing in the beginning (Scott served as a producer on the film), the action is shot well. As stated already, the action is over the top, but it looks good and there a number of impressive sequences. And, of course, all kinds of stuff blows up. The A-Team is a movie that literally shoots off fireworks at one point, and that’s fine with me. The only downside is that the final set piece relied a bit too much on CG effects, but it’s still quite awesome.
The A-Team is a film that shouldn’t be taken too seriously, mainly because it doesn’t take itself seriously. Just because the film is ridiculous and self-aware doesn’t mean it’s without faults, though. The film does get serious a couple times and it seems unnatural. The most notably instance of this is the subplot in which B.A. turns nonviolent, which might be the most ridiculous and cheesy part of the film, and that’s saying something. Plus, the story, dealing with CIA intrigue and stolen currency plates, is weak. These things are easily forgiven though due to the fun factor.
The A-Team is a great popcorn movie. I’m sure some people out there could sit through it and scoff and pick it apart. If that’s fun to you, then have at it; you shouldn’t have too much trouble degrading this film. If you prefer your fun in the way of crazy action, then check out The A-Team and laugh along with the crew as they go from one outrageous action scene to the next.
Posted by Eric Harris at 10:24 AM