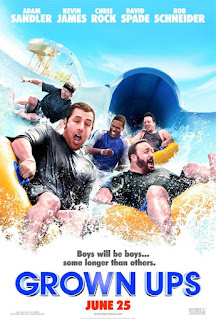 grade school. I loved his comedy albums and his early movies like Billy Madison and Happy Gilmore. I guess you could say I grew up enjoying Adam Sandler’s comedy. It’s unfortunate, but now I think my sense of humor has grown up past Sandler’s. Or more accurately, his sense of humor has lost its edge.
On paper, Grown Ups sounds like a sure thing. It has Sandler, Chris Rock, Kevin James, Rob Schneider, David Spade, and a number of cameos. If all of these guys are in it, it has to be funny, right? Well…yes and no, mainly no.
Grown Ups can best be described as a family comedy (if the youngest child in your family is around 9-10, that is) and that was part of the problem for me. I’m not a family comedy kind of guy. I don’t recall enjoying the more innocent comedies even when I was young enough to be considered “innocent.” They’re just not my thing. If your idea of comedy involves playful (translation: bland) jabs between spouses and old friends, then you’ll probably like this one.
I call the jabs bland because it all seemed so forced. I thought, if anything, this film would realistically represent what a group of old friends could be like. For one thing, most of these guys actually are old friends in real life, but they couldn’t get that across onscreen, though. Instead, we get a group of guys playing it safe. What’s worse, they laugh at their own jokes, creating a strange kind of laugh track for the audience. There’s nothing worse for a comedy than a character laughing way too hard at a weak joke, trying to trick the audience into believing that they’ve just witnessed comedy. All that forced laughter just accentuates how unfunny it all is.
Grown Ups just isn’t all that funny. I want that to be clear before I point out a few positive comedic elements. Make no mistake, though, this film is a disappointment. It’s really hard not to laugh at least a few times during a comedy and this film did have a moment or two. The biggest laughs this film got out of me came from the supporting cast. I’m a sucker for a good cameo and this film has plenty of regulars from the Sandler movie universe. My personal favorite was Steve Buscemi. I don’t want to go into too many details because a good cameo is a bit of a surprise. Just know that if you watched SNL during Sandler’s time and you’ve seen his other films, a few familiar faces will crop up.
The fact that my favorite moments were cameos is a big problem. The main cast, who have all starred in their own comedies, should be the ones bringing the big laughs. The only one that I found consistently funny was Kevin James. This is strange because I’m not much of a Kevin James fan (the popularity of Paul Blart will forever confuse me). I enjoy a self-deprecating heavyset guy, though, and James is perfect for the part. He takes the fat jokes very well, and then he’s willing to dance around with an empty chicken bucket on his head.
Kevin James’ character is one note, just like the rest of the stars of the film, but his note was funny to me. It’s quite possible that someone may find Rock funny as the stay at home husband, or Spade as the single, aging ladies man, or Schneider as the new age idiot with the older wife. It all comes down to taste.
Sandler’s character is the only one that didn’t seem one note to me. He’s a successful (agent, producer, I couldn’t really tell) Hollywood man who has lapsed in the parenting department, leaving the job to a nanny. (His explanation for having a nanny around all the guys provided a few laughs for me.) He tries to set things right by forcing his kids to abandon technology for some old fashioned outdoor fun and this is where the film works. When Sandler looks around and sees what is happening to his family and friends, the film shows a pulse. It’s just a shame that the film didn’t focus more on that. If this film had been a comedy that took life and how things change over time a bit more seriously, then I am sure the laughs would be genuine and the movie itself would have had a lasting effect on me.
As it stands, though, this film focused more on some really clichéd and goofy comedic elements like a bad toupee, a farting grandma, a muscleman with a high pitched voice, etc. There was so much potential here, though. It’s a shame they went goofy and lame with it. But then again, I have a darker, more cynical sense of humor. If you like your humor extremely light (so light it’s almost nonexistent at times), then you may enjoy this one.
Posted by Eric Harris at 10:48 PM