The Kurgan is still shakin' in his boots after this one. True, those boots are made with the skin of his enemies...but they're still shakin'.

Quick, did you like the first Paranormal Activity? No? Don’t 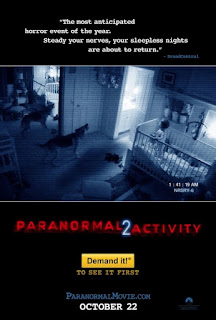 watch this then. That may be obvious advice, but just in case you thought this sequel might try and get all Blair Witch 2 on you, be assured that it does not. Paranormal Activity 2 (a thankfully straightforward horror sequel title) is exactly like its predecessor in tone and style. If you thought it was stupid the first time, why would your mind change for a second go around? If you’re like me, though, and thought the original was a refreshing and chilling horror film, then read on.
Paranormal Activity 2 was a pleasant surprise for me. I honestly expected this movie to be complete garbage. I came close to skipping it completely, but good word of mouth and a decent score on Rotten Tomatoes convinced me to give it a try. I’m glad I did. While this sequel doesn’t surpass the original, it is definitely a worthy addition to the franchise. Yes, I said franchise because after this film’s opening weekend you can bet you’ll be seeing a Paranormal Activity every Halloween for the foreseeable future a la Saw. I’ll come back to that later, though.
This film worked for me mainly because of its connection to the original. This film actually turns out to be a prequel of sorts (Micah and Katie show up sporadically) and that was surprising to me. I figured the filmmakers would go with a standalone story for the sequel. But they actually ended up tying it all together nicely. Paranormal Activity 2 follows Katie’s sister Kristi and her family. I don’t want to spoil the story, so I won’t go into specifics. Basically it’s the first film with a teenager, a baby, and a dog thrown in. A crying baby and a barking dog in the middle of the night? Throw some mirrors in and we have some creepy stuff. What, you have two mirrors? Oh crap.
Which brings me to what I love about these two movies. This series is essentially the “Where’s Waldo?” of the horror movie world. You have to constantly scan the screen to look for something amiss. This is mainly fun in the early minutes of the film because things get progressively obvious. I love those first few nights, though. I find my eyes darting all over the screen, not wanting to miss a thing. I’m sorry, but if a film makes you pay that close attention to it, then something is going right.
The scares get more blatant near the end, but that doesn’t diminish the film at all. I have found that creepy, loud noises in the middle of the night are very relatable scares. Everyone’s been home alone at one time or another, so it’s easy to place yourself within this movie. The unseen horror of it all adds to the fright factor. A stomping invisible menace is flat out effective.
The film not only adds more characters, it also adds more cameras. The reasoning is justified and there are enough blind spots to keep things suspenseful. Overall, everything that was effective the first time around still works; it only lacks the “gotcha!” of the original.
The only other thing I felt that this film lacked compared to the first movie is the character development. I liked the young couple from the first film. They were amusing and believable. This time around we get believable characters, but we don’t get to know all that much about them. The teenager gets some nice moments, but for the most part I didn’t find myself caring about this family as much as I did for Micah and Katie. Let me put it this way, I remembered Micah and Katie’s names, but all I could remember from this film were the mother’s name (Christi) and the baby’s (Hunter). I think the teen had a name that started with an “A”…not sure, though.
Now back to that whole franchise business. I rejoiced when the first film crushed the Saw sequel last year (and I hope this takes down Saw 3D this weekend). I loved the first Saw but felt that the series had spiraled out of control from the second film on. I was glad to see this sequel work, but I don’t see how they can keep the story connected for future films without it getting extremely tiresome. It might be unfair to judge like this, but I can’t imagine any future outings working this well; as a story, that is.
The scare tactics of this film will work for a while, though. I don’t know if they will work for seven movies, however…or for 3-D for that matter. And here’s hoping that we’re not talking about Paranormal Activity 3-D this time next year.
As it is, we can be happy that this sequel to the unlikely phenomenon from last year turned out to be a surprisingly effective follow-up. If you liked Paranormal Activity the first time, watch this. If you didn’t, well, whatever disparaging comments you had for the first film…repeat them.

I liked the touch of the framed photo from the original showing up onscreen.

The scenes in the basement in the end were a bit too close to those of REC (or the remake Quarantine) for my taste...still scary, though.

Anyone notice the message these movies are sending? Men don't believe in spirits and ghosts until it's too late and they pay for it with their lives.

What happened to the dog? Was it in the last scene? I didn't notice it. Maybe it's still in the hospital. Or it's dead...

They did review the security footage a few times, but a reasonable family would have checked that stuff out much more consistently when most of this crap started happening.

Way to amp up the dragging scene in this one. I loved how she got away for a bit, just to be dragged again.

Katie Featherstone snaps necks with the ease of a Steven Seagal in his prime.
Posted by Eric Harris at 11:16 PM