Planes, Trains & Automobiles this isn't, but it's still pretty funny.

Comedy is my least favorite genre to review. 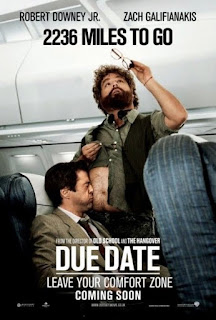 I love a good comedy as much as anyone, don’t get me wrong, but to critique it is an exercise in futility. Comedy is subjective; it’s all about the viewer’s personal sense of humor. I suppose you could make this argument for all genres of film, but I find comedies are much more susceptible to divisiveness. The point is I can’t tell you whether or not Due Date is funny; I can only tell you if I thought it was funny.

With all that said, I thought Due Date was funny. I didn’t find it uproarious or anything, though. This movie, from writer/director Todd Phillips (The Hangover), tries to be a bit more than a laugh a minute comedy. Due Date wants to be Planes, Trains & Automobiles but it lacks the heart of that superior film. This movie does have insanely funny moments, but it’s mainly a film of polite chuckles rather than uncontrollable guffaws. I’m okay with that and I did like Due Date, but it is not a potential comedy classic.

I make the comparison to Planes because Due Date is a road trip movie in which an odd couple of men have to make it across the country in a set amount of time. Robert Downey Jr. plays Peter, the Steve Martin of the film, who is trying to make it home to L.A. for the birth of his child, hence the title. Zach Galifianakis plays Ethan, the obnoxious, but sympathetic John Candy role, who is traveling to L.A. to become an actor after his father has died.

Your enjoyment of Due Date doesn’t really hinge on great comedic writing; it’s more about the two stars. I’m starting to pick up on a bit of Galifianakis backlash lately and I can understand why: the guy is in everything it seems. A day doesn’t go by when I don’t see a preview, TV show, internet video, or movie that features his bearded face. I don’t mind because I find him hilarious. Others might be starting to tire of him.

Galifianakis, like John Candy in Planes, is disgusting at worst and only slightly annoying at best. Downey Jr. does a great job just reacting to the craziness. Sure, it’s funny enough when Galifianakis uses one of his antiquated exclamatory phrases (“I have never!”) and stomps off in a furious ladywalk, but just seeing the look of befuddlement and anger on Downey’s face is enough to make me laugh. It gets even better when Downey loses his cool and gets loud and violent. My favorite moments in the film involve Downey punching and spitting. That may sound odd, but when you see it, you’ll know exactly what I’m talking about.

The stars work well together and most of the big set pieces, while completely ridiculous, are pretty entertaining. The few action-type scenes are filmed well. The supporting cast is amusing (though I thought Jamie Foxx was a bit underused). The point is this movie is completely enjoyable and worth checking out. But it does fail in a very noticeable way that may put some viewers off a bit.

This film tries very hard to have a heart. It’s understandable that Phillips would want to make a film with a little more drama to it since his previous films (Old School, Road Trip) are all laughs and little or no heart. The emotional scenes in Due Date are so unexpected and awkward, though, that they fail to produce any sense of drama. First off, Galifianakis is hard to take seriously and you want to laugh at the guy. I like to laugh at his stupidity, though, not at his grief. In a scene in this film, Galifianakis’s character is attempting to showcase his acting “skills.” It’s funny enough, but in the end of the scene he starts sobbing over the death of his father. When he switched over to the tears I heard multiple people in the theater laugh, not realizing that the funny scene just went sad. It’s not good when a movie makes you inadvertently laugh at someone’s grief. So Phillips has a way to go in the drama department. I would be okay with him never attempting again, though.

Due Date is the film that wants to have a heart but doesn’t. That doesn’t mean it is a bad movie. I enjoyed the majority of the film and I laughed consistently. This isn’t a comedy for the ages or anything, but it’s just fine for now. If you’re a fan of the stars, you should enjoy it. But remember, this isn’t a funny movie; it’s just a movie that I found funny. The comedy is up to you.

It might be wrong of me, but seeing Downey Jr. punch a child in the stomach and spit in a dog's face made me laugh and laugh.

I'm pretty sure they should have been arrested at the end of the movie. They did cause quite a lot of damage at the border.

Danny McBride's short scene was funny. Even though the line is in the previews, I still like the idea of someone making reservations at Chili's.

Speaking of the preview, way too many jokes were given away. I was hoping they would take the example from Get Him to the Greek. That comedy's previews barely featured any footage that made the final cut. It showed the tone of the movie without ruining any of the jokes. Due Date's previews spoil a big chunk of the movie. But what can you do? It was really hard not to see any of the marketing for this film.
Posted by Eric Harris at 4:43 PM