Much like Bardem before him, Bale gives the standout supporting performance of the year.

The Fighter has all the elements of a boxing 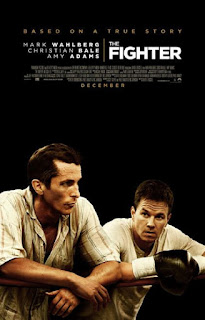 drama that might lead people to worry about it being a clichéd, dull retread of every boxing movie from yesteryear, but the film dashes aside the notion that a boxing drama must be 100% drama and ends up being a surprisingly light, effective film featuring an amazing performance from Christian Bale.
The film is the true story of “Irish” Micky Ward (Mark Wahlberg) and his older brother/trainer, Dicky Eklund (Bale). The focus of the film is on Micky and his battle to get out of his brother’s shadow and become the champion his brother never was. That sounds simple and basic enough, but the family drama is what makes this film truly effective. Dicky still believes he has a chance of a comeback, and it seems like the rest of his family does as well. No one, aside from his father George, seems to care about Micky’s career.
It’s easy to see why Dicky gets all of the attention. Micky is the quiet type, just sitting back and letting everyone else take care of him. Dicky, on the other hand, is outspoken and charismatic, though he suffers from crack addiction. The film becomes interesting here for two reasons: the treatment of the addiction and Bale.
Drug addiction is usually shown in a very negative light, with terrible consequences. In The Fighter, though, it’s handled a bit differently…with a bit of comedy. Don’t take that the wrong way, the effects of drug use are still shown, but some of Dicky’s antics are humorous. Perhaps the filmmakers didn’t intend for some moments to be funny, but the end result is humorous at times. This is not a bad thing. Drug abusers in films tend towards the melodramatic; it was refreshing to lighten it up just a bit.
The main reason the character of Dicky works, though, is Christian Bale. Bale has given many impressive performances, but he truly inhabits this character. It is obvious from the first frame that Bale is doing something amazing in this film. Bale made every scene he was in better not just with his accent but with pure physicality. There is an element of weight loss, but it’s the way Bale moves in each scene. Whenever he’s talking to a character in a two shot, I kept wondering what Bale was up to when the camera wasn’t on him. While his character doesn’t get much action in the ring, he still manages to turn every conversation into a simulated boxing match. If he doesn’t get the Oscar for Supporting Actor it will be a travesty.
The other performances pale in comparison to Bale’s, but that doesn’t mean they aren’t good. Wahlberg is decent and is notable for the fact that he is back in his range playing an athlete. Amy Adams handles herself well as Micky’s new girlfriend, though I saw her as just a more serious version of her character in Talladega Nights. Jack McGee has quite a few fun moments as George. And Melissa Leo gives yet another strong performance as Micky and Dicky’s manager/mother.
Leo represents the real conflict of the film. She favors Dicky over Micky no matter how many times Dicky screws up. The sincere shock on Leo’s face when anyone stands up to her ridiculous favoritism is enraging and effective. That, along with other situations, makes The Fighter an easy film to get caught up in and enjoy.
One aspect that is hard to truly enjoy is the boxing. Some of it is handled decently and the fights are easy to follow, which is the best you can expect from a film about boxing. Isn’t it time that boxing films ditch the Rocky sound effects, though? Every punch, even blocked punches, carried an overly loud sound effect that became distracting at times. Visually, though, the fighting is exciting and occasionally interesting.
The film is engaging almost throughout and because of that it is easy to get past some of the more melodramatic scenes. The light tone stays intact for the most part, though, only tilting off the rails momentarily.
The nearly comical tone of the film and the realistic family struggles make this an enjoyable film. Christian Bale elevates it to one of the year’s best. It can’t be stressed enough that Bale has given arguably the best performance of his career; no small compliment when you consider Bale’s past roles in American Psycho and Rescue Dawn. Enjoy The Fighter, but be awed by Christian Bale.
Random Thoughts (SPOILERS)
I liked the framing device of the documentary. Good way to bookend the film, especially since it starts with Bale on his own, bringing Micky in and ends with Dicky getting up to leave the camera alone with Micky.
The melodramatic scene I referenced above is the part when Dicky’s toddler son wants to watch the documentary. I don’t know, it just seemed over the top at that point.
I dug the soundtrack; it helped keep the tone consistent and it placed the film in its time period well (except for that Chili Peppers' song from Stadium Arcadium, though it sounded right for the scene).
It was interesting that Mickey O’Keefe, Ward’s real life trainer, played himself in the film. That role was not a cameo. I was impressed with him enough to look him up and find his other roles. I was quite surprised to find out who he was.
The funny aspects of drug abuse, just to be specific, were Dicky’s escape route from the crack house (out the window into the trash) and when he knocked out George. Describing it only makes it sound more serious, but those who see it will understand that it could be viewed as funny.
Posted by Eric Harris at 7:34 PM