*Before I post my Top Ten of 2010 (by the Wednesday at the latest), I wanted to post this collection of short reviews for films that are either in very limited release, or in that purgatory between theatrical and home video release. Never Let Me Go - Directed by Mark Romanek, written by Alex Garland (based on the novel by Kazuo Ishiguro), starring Carey Mulligan, Andrew Garfield, and Keira Knightley - Rated R

A somber, effective film that deserves a close viewing.

Never Let Me Go is a very subdued, somber 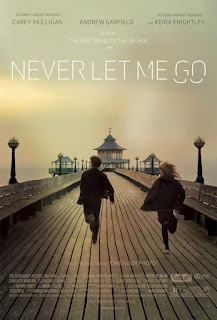 film about mortality and morality in a slightly sci-fi setting. The film follows a group of “donors” from childhood into adulthood. A “donor” is exactly what it sounds like; in this alternate reality, cloned humans are kept and raised to eventually donate their organs to the regular population. What makes this film subdued is the fact that hardly anyone seems to acknowledge the fact that everyone is going to die very young. They all just accept it, which gives the film a very unnerving quality.
Because of the somberness, this film may not be very effective the first time through (I know I wasn’t impressed with it after one viewing), but if you can, watch this movie at least twice. This movie focuses on the small things. The way people try to pretend to live normal lives. These things are not very easy to pick up on it everyday life, much less in a film. The second viewing will open your eyes a bit more and may affect you more than you expect.
One thing that is easy to pick up on in one viewing is the acting. Carey Mulligan and Andrew Garfield are great, and Keira Knightley turns in a very good performance as well. Garfield gets to yell and freak out at times, so he has a noticeable performance. But Mulligan is the best part of the cast. The movie is told through her perspective, and she holds the movie together very well. You can see so much in her sad expressions throughout.
Never Let Me Go is not a masterpiece or anything, though. Somber or not, the film tends to crawl at times and can be terribly boring. But there are enough redeeming qualities to make this a film that should be watched and watched again. Only time will tell if this film will have a lasting effect, but for now, it’s worth focusing on for a moment or two.
Rabbit Hole - Directed by John Cameron Mitchell, written by David Lindsay-Abaire, starring Nicole Kidman and Aaron Eckhart - Rated R

A well made film, but just too miserable for my taste.

Rabbit Hole is one of those intentionally miserable movies about 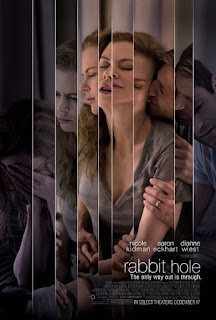 a family tragedy, in this case the tragedy being the untimely death of a couple’s young son. The film is not about the death itself, but about how the surviving couple copes with their lives post-parenthood. Do they have another child? Do they move out of their old home? Do they get a divorce? Do they have affairs?
The most important question, however, is do you, the viewer, care what these two do? If you can get past the misery (I would file this film under the genre of “misery porn,” so some might be put off by the dire tone of the film), then Rabbit Hole will most likely work for you. The casting takes care of most of the work. Aaron Eckhart and Nicole Kidman are both more than able to hold a film like this together. Also, they are believable as a couple and as troubled people. They make the film interesting and effective.
Rabbit Hole is not an easy film to watch, but that doesn’t make it a bad film. You just need to know what you want to see. What this movie presents is realistic emotional issues and that doesn’t scream entertainment to most people (this reviewer included). Frankly, it sucks having to witness major problems play out with a couple with no clear answers to their problems. The fact that this movie might depress you or frustrate you is a testament to the effectiveness of the film. Rabbit Hole is not entertainment, but it never pretends to be. Just ask yourself, “Do I want entertainment or do I want misery?”
Fair Game - Directed by Doug Liman, written by Jez Butterworth & John-Henry Butterworth (based on books by Valerie Plame and Joseph Wilson), starring Naomi Watts and Sean Penn - Rated PG-13 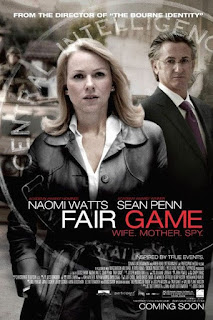 a CIA agent after an op-ed was written by her husband, Joseph Wilson, about how he didn’t find evidence that Iraq was buying yellow cake uranium from Niger. Of course it’s a bit unfair to try and explain the plot of such a situation in one sentence, which is why you need a full length film for this interesting story.
This film is not just a recreation of the interviews and commentaries that aired on the news stations when this story first broke back in 2003. Director Doug Liman has made a kind of behind the scenes look at what happened before the story made national headlines. The story itself flows nicely and coherently and since it’s a true story, it’s instantly interesting because the stakes for the characters are real.
Speaking of characters, this film is excellently cast. Naomi Watts handles the roll of mother and field agent quite well. The most important aspect of her performance is believability and she seemed legitimate. Sean Penn steals the show here, though, as Joseph Wilson. His character is basically that of an angry intellectual and Penn is just perfectly cast. The best scenes in the film involve dinners that Joseph and Valerie attend in which they have to pretend they don’t have any more information about Iraq than their friends. Penn shows such restrained fury in these scenes that you can’t wait for him to verbally berate everyone at the table. He may be in his comfort zone with this one, but that doesn’t make him any less impressive.
Penn’s performance alone may enrage you as you watch Fair Game (that’s a compliment, by the way), but if he doesn’t, the subject matter itself will. This is a film that is really about the search for weapons of mass destruction and we all know how that search ultimately turned out. It’s not even so much that the executive branch had false information (perhaps knowingly so); it’s how bureaucracy turned national intelligence into a ridiculous mess.
Fair Game is infuriating in the best way. It makes you care about a real story involving government. The acting is great, it moves at a decent pace, and it’s always interesting. Fair Game is entertaining and educational (the two can co-exist from time to time). Watch it and get angry.
Blue Valentine - Directed by Derek Cianfrance, written by Cianfrance, Joey Curtis, and Cami Delavigne, starring Ryan Gosling and Michelle Williams - Rated R

Blue Valentine is a film that is simultaneously about the 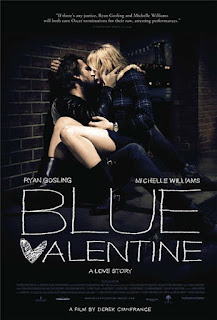 beginning and end of a marriage. Dean (Ryan Gosling) and Cindy (Michelle Williams) are shown falling in and out of love and it is uplifting and hopeful one minute only to be depressing and miserable the next.
Honestly, the cross-cutting of the film was confusing at first. It was a bit hard to tell the difference between college-age Gosling and early thirties Gosling. It seemed pointless for a bit; a needlessly stylized structure thrown in just to spice things up. But that cross-cutting is what makes the film emotionally jarring.
Aside from the film’s initial NC-17 rating (which has now been rightfully changed to an R), Blue Valentine is being recognized for the performances of the two leads. Praise is understandable for Gosling and Williams. Though I didn’t find their performances to be the most impressive of the year, they were still very real performances. It wasn’t hard to believe that these two characters were in love and were struggling with that fact. Although I feel like I’ve seen Gosling and Williams play these characters before.
The struggle is the heart of the film, and that makes this film a bit tough to watch. Like Rabbit Hole this is a film that takes an honest, painful look at a relationship. As far as content goes, Blue Valentine is not for me. I’m not a fan of watching marriages disintegrate. I don’t find that terribly compelling. The film itself is well made and all, but the subject matter is too bleak and depressing for me. The structuring and the performances are not enough to get past that bleakness.
Posted by Eric Harris at 9:46 PM