"Guardians" Is the Weirdest, Possibly Best* Marvel Movie Yet

Guardians of the Galaxy 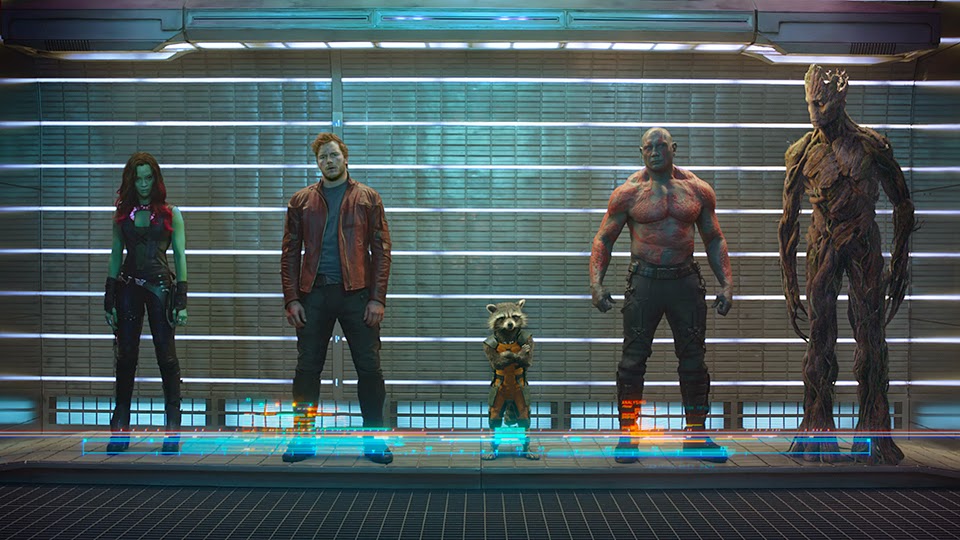 *I say "possibly best" because I need to let the movie sink in for a while before I claim it to be the best among a lot of very entertaining movies.

And you thought Thor was the weirdest part of the Marvel movie franchise.  As the superhero movies have branched out beyond Earth in recent years with the Thor films and The Avengers, I wondered how far mainstream audiences would go with Marvel into deep sci-fi territory.  Very far, it turns out.  Guardians of the Galaxy (which I will refer to as GotG from here on out because I’m lazy) presents an entirely new group of superheroes who only comic book fans will recognize in an entirely alien setting.  That’s exactly the kind of stuff I like, but I assumed regular audiences wouldn’t be so thrilled since they wouldn’t have an iconic character to get behind.  It turns out audiences and critics alike will go with a movie as long as it’s one of the most fun films of the summer.  (Side note: This shouldn’t be all that surprising since Star Wars could be described the exact same way, and people seemed to like that.  I would point out, however, that “Star Wars” didn’t get the marketing blitz that GotG did.)

GotG works so well because the titular galaxy it takes place in is so large and diverse.  Like most deep sci-fi works, there are many worlds in GotG, so when one is threatened it’s not as big of a deal as it normally is in a film.  What this means is that the film can still be fun while the stakes are quite high.  Characters can joke around at the direst of moments, and it feels normal.  That wouldn’t work if someone was trying to stop a nuke from blowing up or something.  But when the planet on the line is Xandar, then who cares if we’re laughing while it is potentially destroyed?  (No offense to the fictional Xandarians.)

A goofy sci-fi action film needs a goofy cast of characters to inhabit it and GotG definitely has that covered.  This might just be the high of recently watching and loving this movie, but I’m leaning towards the Guardians over the Avengers at this point.  The group is led by Peter Quill, AKA Star-Lord (Chris Pratt), a kind of Indiana Jones/Han Solo hybrid.  He is joined by Gamora (Zoe Saldana), a green-skinned step-daughter of evil titan Thanos (and she’s not the weirdest member of the group by a long shot…); Drax (Dave Bautista), a literally literal (meaning he takes everything people say literally) vengeance seeking hulk; Rocket (voiced by Bradley Cooper), a genetically-altered raccoon who can talk and is a weapons specialist; and Groot (voiced by Vin Diesel), a living tree that can talk, sort of (he only says, “I am Groot”).  With a group like this, the movie pretty much has to be goofy and fun.

Marvel has succeeded with all of these increasingly weird properties for multiple reasons.  The cast is usually spot-on, they spend plenty of money for each film, but, most importantly, they hand off the riskiest films to fellow geeks.  Joss Whedon was the perfect choice to helm The Avengers, and lesser-known geek-friendly writer-director (hey, that’s the first time I’ve used three hyphenates in a row!) James Gunn is equally perfect for GotG.  I am a huge fan of Gunn’s first feature, Slither, so I knew when he got this job that GotG would be something special.  Hats off to Marvel for handing off their properties to people who know what they’re doing.  By the way, if you haven’t seen Slither, check it out.

Gunn (and co-screenwriter Nicole Perlman) bring a great sense of humor and nostalgia to the film that makes it stand out even more from the “traditional” Marvel properties.  All of the films in the series have their comedic elements, but GotG is a bit different in that it’s a bit more self-aware.  An example of this would be the fact that Star Lord refers to the mysterious orb at the center of the movie (like the Tesseract or Aether from other films) as having an “Ark of the Covenant vibe” essentially saying the film is a bit like Indiana Jones and these movies always involve some mysterious powerful substance that is never clearly defined.  My least favorite part of all of these films are the Infinity Stones for the very reason that they’re mysterious, are simply called “powerful,” and bad guys want them for bad reasons.  It’s just too vague and uninteresting.  GotG at least calls itself out for it, which makes it easier to stomach.  Moving on, the nostalgia aspect sets the film apart even more.  Star Lord is taken from Earth in 1988 and happens to have an “Awesome Mix Tape” and a Walkman with him.  This allows the film to be scored to music from the late 70s and early 80s.  The contradictory nature of that music set to sci-fi action and locales is funny and kind of cool, really.  And since Star Lord is the only character from Earth (that we see, anyway), he gets to do some Marty McFly-esque referencing as he discusses Footloose in a mythical fashion and refers to John Stamos as a famous outlaw.

Much of the humor is thanks to the delivery of the cast.  Pratt is a natural as Star Lord.  He has received the most attention for getting in such great shape for the role, and that is impressive, but what makes him stand out in a Marvel movie is his delivery of goofiness, which isn’t surprising given his work on Parks & Recreation.  Regardless of why he gets recognition, he definitely deserves it and carries the film easily.  Saldana is fine as Gamora though the tough sci-fi girl role she always plays is wearing kind of thin.  Dave Bautista surprised me the most with his matter of fact delivery.  The fact that he takes everything literally made for some of the funniest moments.  The voice work for Rocket and Groot is fine, but what’s more impressive about these characters is that they ended up being the most sympathetic members of the group, and they were created through motion capture.

GotG is still an action film, though the action feels like an afterthought.  That’s not to say there aren’t plenty of impressive fights and whatnot, it’s just that, at this point, we’ve seen a world or galaxy or whatever saved from annihilation by some vague cosmic power so many times that it’s no big deal.  How many times can we see a giant ship of some kind crash into stuff before we get kind of bored with it?  That’s really not a knock against the movie; it’s just that this film handles everything else so much more interestingly that the action isn’t the focus.

Guardians of the Galaxy (I’ll write it out one more time) is also unique in that almost everyone seems to love it.  That is truly refreshing because I am very used to loving a movie only to see the message boards filled with hate (to be fair, that’s still happening, but it seems much lighter than usual for a movie this big).  That said, I don’t think everyone will love this, and I certainly don’t recommend it to everyone.  The first fifteen minutes of the film involve so many different extremely sci-fi settings and situations that it starts to sound like gibberish.  That could possibly put people off of this movie.  If you can get past that kind of stuff, however, I think there is a movie here for everyone.  It looks pretty crazy, but it offers the kind of fun entertainment that almost anyone can enjoy.  Now let’s see if The Avengers: Age of Ultron can top this next year.  Honestly, I don’t see how it can.