"The Hunger Games," the Young Adult Franchise That Ended Up Being a Very Dark Treatise on the Effects of War, Comes to Fitting Conclusion. 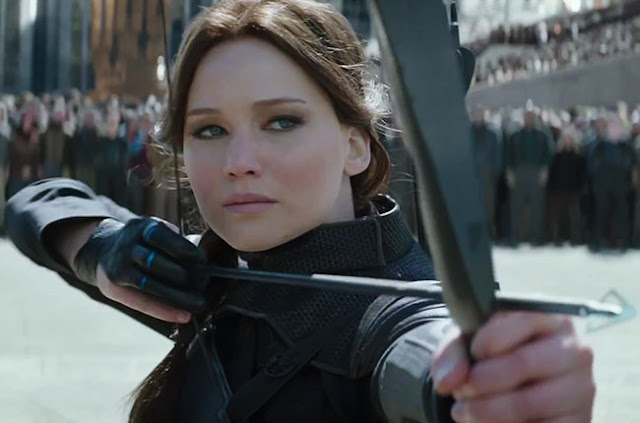 The Hunger Games series has been a pleasant surprise (both the books and films) because it started out as a knockoff of Battle Royale but ended up becoming a meditation on war and revolution. The final two parts, while too blatant in their message, do not glory in the war, but rather analyze it. The first part was about propaganda, which made it interesting, if a little on the boring side. Katniss (Jennifer Lawrence) spent the bulk of the film as the symbol of the rebellion, which meant she filmed a bunch of promotional videos for the war, but spent very little time in the actual war. It felt like a cheat, both for the audience and for Katniss. In Part 2, however, Katniss gets involved in real war.

If Part 1 was about the effects of propaganda and symbols in war, Part 2 is about actual war. An early scene has Katniss arguing with Gale (Liam Hemsworth) about bombing a compound and the collateral damage it could cause. Katniss worries about every death since she had to kill so intimately during the Games, but Gale thinks that even people mopping the floors of a Capitol compound deserve to die. The film actually leaves it up to the viewer who is right as innocent people do die, but positive results ensue. What is notable is the fact that such an issue is brought up at all. In most films, especially young adult films, there are simply good guys and bad guys. In The Hunger Games, it’s more of a gray area. It’s important that a franchise aimed at young people contains such a debate, because war in the real world has collateral damage. But in most popular movies and videogames aimed at young people, there is none.

Despite Part 2 being a meditation on war, it is still an action movie for the most part. Director Francis Lawrence (who has helmed the series since the second film) has an eye for action, and things are kept fresh rather than letting them devolve to nothing but bombings and shootouts. The best sequence of the film is reminiscent of Lawrence’s work on I Am Legend as the heroes spend a tense night in tunnels, fleeing mutated horrors that would have been right at home in Legend (this time the CG is a bit better, though).

While there is plenty of action, the film keeps focusing on the characters’ reactions to it. Katniss is the reluctant warrior, only fighting because she must. Gale is the bold warrior, willing to do whatever it takes to end it. And Peeta (Josh Hutcherson), newly released after being tortured and brainwashed, is the damaged warrior. Peeta’s condition foreshadows nearly every major character: this rebellion will leave you damaged, but there is hope. Once again, The Hunger Games is a franchise that, for better or worse, does not shy away from the effects of violence and war. The heroes do not celebrate, even when they win.

As for that “better or worse” part, any film that wants to get big ideas across runs the risk of becoming preachy, and Part 2 definitely falls into that trap a few times. The amount of speeches about war and rebellion in this film is staggering. It seems like every five minutes someone is giving a speech to remind us what the movie is about. It makes you want to yell, “I get it! This movie is about war and its consequences!” The film, which is a bit long, probably could have shaved ten minutes off its screen time by nixing a couple of these redundant speeches. Also, just like in Part 1, characters spend too much time watching screens. It’s hard to not feel silly watching a screen featuring characters staring at a screen.

Despite these minor squabbles, The Hunger Games: Mockingjay – Part 2 is a fitting end to the series (which probably won’t really end and will be expanded upon within a few years). The series truly found its tone and look in the last few films, ditching the glitzy Capitol of the first two films and flooding the last films (quite literally in one scene) in darkness. The colorful world gives way to concrete and despair as the series focuses on war. Hats off to The Hunger Games series. It could have easily been fluff spoon fed to the masses of young fans, but ended up being a surprisingly dark, if not heavy handed, treatise on war and its effect on everyone.

I couldn't help but think about Dante and Randall's conversation about the Death Star in Clerks. Turns out Gale and the contractor have the same view of laborers for evil empires...

I don't know why Gwendolyn Christie is in this film. She has maybe two minutes of screen time.

The treatment of Philip Seymour Hoffman was handled as deftly as possible. He's reduced to a series of reaction shots here and played up as the silent plotter behind it all. I suppose it works.