At long last: The Wrestler

"I'm an old broken down piece of meat and I deserve to be alone."

That line, prominent in the trailers for "The Wrestler," says it all. Mickey Rourke, as Randy "The Ram" Robinson, is perfect. Find an old picture of Rourke and compare it to today; Rourke himself appears to be a broken down piece of meat. So all of the comparisons to the character and the man are fair, but that's all I want to comment on as far as that goes because I think to say that Rourke was born to play the role and things like that actually belittle the performance. If he was born to play it, then why is it so impressive? It's impressive because the guy can act. Rourke does so much just with his eyes and his voice in this. The lines are good, but he makes them better. You hear a little desperation in his voice. You see the pain behind his eyes. You feel sorry for this man. You want him to succeed the moment you see him. That is Rourke at work. That is why he is winning awards and that is why he deserves that Oscar in a few weeks. Now, onto the actual film, which is unfortunately taking the back burner this awards season.


The Wrestler begins with a montage of clippings from The Ram's career: sold out shows, pay-per-view specials, championship fights, etc. Then it cuts to twenty years later and The Ram is sitting in a folding chair in what appears to be a kindergarten classroom which has been turned into a dressing room for the night. He is handed some money, though it isn't as much he expected because the gate wasn't very big that night. This is what he has become. Darren Aronofsky (The Fountain, Requiem for a Dream) uses the camera to follow closely behind The Ram, just observing, not showing his face just yet. We need to walk around with this guy for a bit before we see his face. This creates the sympathy because if we see his face first, we start making assumptions about the guy. If we walk around with him, see him locked out of his home and sleeping in his grungy van, then we feel something about him before we see that damaged face. Aronofsky creates an interesting style this way. I'm not sure how to exactly describe, but it just makes you feel like you're there with the characters. He somehow found the right distance, shook the camera enough to create a walking sensation without making it distracting, and left a grainy look to the film to make it seem a bit more real. It helped me get into the story instantly. So we're following The Ram...


We follow him to a strip club where he tries to win over Pam (Marisa Tomei), who is also a performer that's getting a bit too old for the job. We follow him to his estranged daughter (Evan Rachel Wood) who is sick of him, but willing to try to forgive him. We follow him to his matches where he is an esteemed veteran, not a joke, which is what he appears to be when he's working his regular job at a grocery store. Sound depressing? It is, but it's an enjoyable film all the same. The Ram has some funny moments; shopping for his daughter, playing retro videogames with 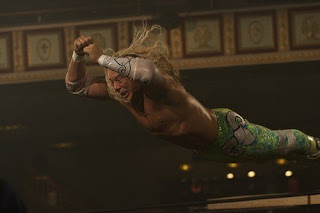 local kids, talking about the greatness that is 80's hair metal, etc. And if you're a wrestling fan, or ever have been, you'll enjoy every second of the matches (you'll probably enjoy them even if you don't care for wrestling). The matches are not only put in there to add action, though. The matches really say it all. The Ram is a fan favorite and he looks like he's at home on the stage...sorry, in the ring. He looks slightly lost everywhere else. One of the best moments in the film is when The Ram starts working in the deli section of the grocery store. He puts on his hairnet in the bathroom then the camera follows him through the back area while the noise of a crowd can be heard. The crowd grows louder as he nears the plastic curtain to the deli, he pauses, walks through and...silence. The Ram is nothing without the fans. He has a real name without the fans. It's funny, it's sad, it's a little shocking here and there, and it's heartbreaking. That's life and that makes a good film.


A quick sidenote concerning the Oscars. I'm happy with the acting nominations (Rourke and Tomei), but it is a joke that this is not up for Best Picture, because, in my opinion, it's the best film of 2008 (even though us in the MidWest have to wait until 2009 to watch it). This must be better than The Reader. It just has to be. And Aronofsky is not up for director and Ron Howard is? I loved Frost/Nixon and Howard did a good job with it, but this film has the fingerprint of a great director on it. Aronofsky deserves just as much praise as Rourke, if you ask me. And finally, no nomination for Springsteen's song? The Academy needs to rearrange their backwards technical rules for Best Song and Best Score* because this seems to happen every year.


*Actually, the snub for Springsteen is not due to any actual rule, so it's only explained by the fact that the Academy completely dropped the ball on this one, especially since they only nominated 5 songs, so it's not like The Wrestler was beat out by anything. I have read, though, that they don't like to give it to songs that play over the end credits only, though it is not against the rules to do so.

As for the Score, Eddie Vedder and Jonny Greenwood (There Will be Blood) were left out last year because Vedder's was too "song-based" and Greenwood used some music he had already performed for an album a few years earlier...both technicalities that should have been given nominations regardless, if you ask me.


Next week: Not sure, maybe the new Friday the 13th, but I might just review "Man on Wire" on DVD.
Posted by Eric Harris at 9:34 PM