Bill Paxton Tribute, Part 2: "Frailty" - "Only demons should fear me. And you're not a demon, are you?" 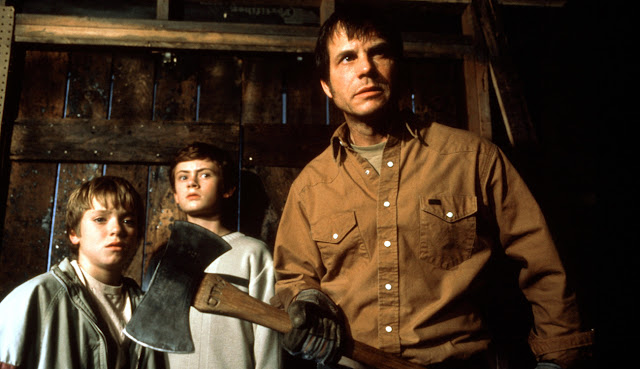 I planned on writing this earlier, but, as usual, I kept putting it off. I'm glad that I did, though, since this is part of my tribute to Bill Paxton, and it's likely that many people have already forgotten about his death. So this was an excuse for me to keep his work in mind and revisit one of my favorite Paxton films.

Frailty is unique to Paxton's filmography in that it's one of his two feature directing credits (the other is The Greatest Game Ever Played). It's also a very unique film in general. A single dad (Paxton) raises his two boys, Fenton and Adam, in 1970s Texas. Everything is normal until the dad (his character is never named) claims he has been visited by an angel and tasked with destroying demons. The younger son is all in and believes in his dad's new purpose. The older son, Fenton, is skeptical, of course, but becomes horrified when his dad starts kidnapping and killing people (he says the demons will appear to be normal people).

To this day, I find the plot of this film fascinating. If you just imagine the situation of the film, it's insane. Paxton elevates it because he is so perfect for the role. Who better to play a simple Texan father and a seemingly crazed demon slayer?

My group of friends was drawn to this film upon its release (we were in high school at the time) because we were fans of Paxton. Like with most things with my group of friends, I cannot explain why this film stuck out to us, or why we still quote it when we see Paxton in something (our go-to line is the one in the title of this article). Paxton just had an indescribable quality that spoke to us. The most impressive thing about Paxton was his ability to ride the line between sincerity and hilarity. I loved his performances for their goofiness, even when he was in a serious movie. Frailty is the ultimate example of this.

(Minor and major SPOILERS from here on out.) In Frailty, Paxton is full of goofy charm as a single dad. He makes lame dad jokes and is constantly drinking Hamm's beer. (Hamm's is a very cheap beer, and I found it hilarious that it was his beer of choice in the film. It's even funnier when you check out the film's trivia section on IMDb, and it claims that they had to use the same can of Hamm's throughout the shoot because they could only find on period-specific can. And that can was already opened, so every time he drinks one [which is nearly every scene, by the way], the sound of a can opening has to happen offscreen. I like to think this ridiculous attention to detail was all Paxton.)

But the movie takes a severely dark turn when goofy dad starts murdering people with an axe. This is where Paxton's performance gets risky. Can you take this guy seriously as an axe murderer. Somehow, you can. Paxton was great at comedy, but he was also great at showing determination. You believe that his character believes he is killing demons, which makes him scary. That said, when he first started talking about the demon hunting, you can't help but laugh. He comes across an axe named "Otis," for God's sake! It's easy, and I believe intentional, to laugh when Paxton tells his boys with complete sincerity that "the angel" told him to do this or that.

When Paxton starts killing people, I still found it a bit funny, but in a dark, twisted way (my sense of humor is all messed up). Something about seeing Paxton yell while swinging an axe makes me giggle. Frailty could have left the movie like this: a dad claims he's hunting demons and we never find out what was really happening. Ambiguity like that is usually celebrated in film. But Frailty goes all in and reveals that Paxton is actually killing demons, and doubting Fenton is wrong. That reveal made me love the film. I like ambiguity in films as much as anyone (it's always interesting to leave things up to the audience's imagination), but it's also nice to see a movie with the guts to say, "This is what's happening; it is not open to interpretation." To be clear, there is a little ambiguity to the film, and I'm sure some people have the theory that the reveal is only in Adam's mind, and he's as crazy as his dad. I think that's stretching it, though. Paxton was a straightforward actor and a straightforward director. Frailty is what it seems to be.

I haven't even mentioned the other actors (Matthew McConaughey and Powers Booth) or other crazy elements (Fenton digging a giant hole for days) because this article is all about Bill Paxton. But know that Frailty is good film all around. Let's face it, though, it's Paxton's movie. He may be gone, but he left an amazing body of work to revisit anytime you start to miss his goofy charm. R.I.P. Bill Paxton.
Posted by Eric Harris at 5:28 PM No comments: