Jungle Cruise - What If Werner Herzog Made a Disney Adventure?

It’s been a while, but my seemingly yearly burnout has come to an end, and I’m writing about movies again. I don’t technically own Jungle Cruise, but I do have Disney+, which the film will eventually be a part of without an extra fee. Also, thanks to the studios realizing that digital screeners are a good idea, I was actually able to watch this at home rather than drive three hours to the nearest theater providing an advance screening, so it inspired me to write about a new movie for a change. Here are my thoughts. 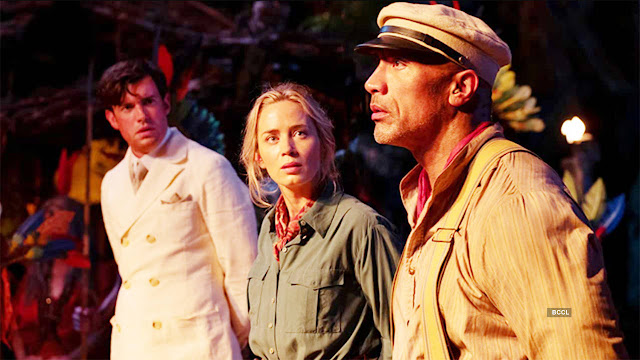 Jungle Cruise is the latest attempt by Disney to turn one of its famous rides into a movie franchise a la Pirates of the Caribbean. Though it’s unlikely that Jungle Cruise will turn into the unwieldy juggernaut that the Pirates films became, it is still a very solid, and very predictable and plain, summer film.

Predictable and plain are not typically considered a good thing when it comes to film, but in this case it was oddly refreshing. Jungle Cruise attempts to be a modern twist on classic adventure films of the 1940s. It’s a classic adventure in that the story is very simple. In 1916, a doctor (Emily Blunt) enlists the help of a con artist boat captain (Dwayne Johnson) to navigate the treacherous Amazon River in search of a fabled tree that has flowers said to be able to cure any ailment. Of course, other nefarious parties (an evil German [because why not?] and cursed conquistadors) want to find the tree, as well. Adventure, romance, action, and hijinks ensue.

The modern twist of it all lies only in some minor character elements. Emily Blunt is a woman who dares to wear pants! Which is such a big deal that “Pants” becomes her name for much of the film. Another character is gay...in 1916! And...that’s pretty much it. These elements are a bit gimmicky, but they do add another layer to a simple film. The homosexual reveal is easily the most emotional moment in the film. And the misogyny of the time is rightfully mocked (a historical society has no issue with the idea of 400-year-old cursed conquistadors [I really like typing the phrase “cursed conquistadors”], but is outraged at the idea of a female tribal chief). These elements don’t elevate Jungle Cruise beyond being a simple adventure, but they are a nice touch.

What makes all of this oddly refreshing is that Jungle Cruise is as relaxing as its title suggests. This movie is the cinematic equivalent of floating down a river. Certainly, that could be a negative experience for anyone seeking more from the film, but if you’re in this for a couple hours of distraction and not much else, then it’s exactly what you want from a summer movie. The best comparison would be to the National Treasure movies. Much like those Nicolas Cage films, there’s nothing about Jungle Cruise that’s annoying enough to hate, and even though the story isn’t as interesting (I just prefer American history, even when it’s mostly made up, to be more interesting than jungle curses), it’s just entertaining enough to enjoy.

Jungle Cruise is a good example of a sleeping movie. If you’re like me, you like to put on a movie or TV show as you fall asleep of an evening. I always try to pick something interesting enough to watch, but simple enough to fall asleep to. If I put on Aguirre, the Wrath of God at midnight, it’ll keep me up for the entire running time. But if I put on Jungle Cruise (once it’s available on Disney+ without a fee), I’ll be asleep before they even get on the boat, and that is the kind of movie I need Jungle Cruise to be. 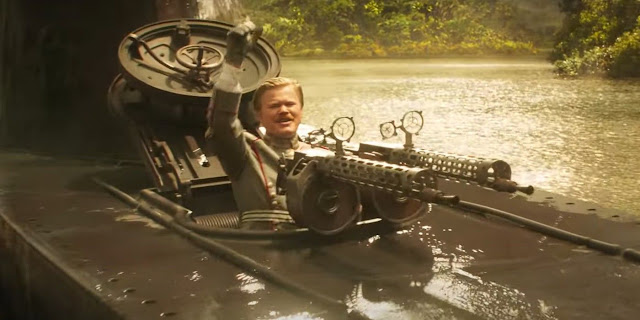 Jungle Cruise appeals to me beyond its simplicity. I’m a sucker for boat-trips-on-a-river movies. Apocalypse Now, Aguirre, and Fitzcarraldo are among my favorite films of all time. I guess it’s the sense of exploring the unknown, but the visuals of the dense, dangerous river and forest coupled with main characters on dangerous and/or insane quests just hit the cinematic sweet spot for me. That’s why Jungle Cruise is such a fun oddity to me. It features the plot points of one of the Werner Herzog films (Aguirre and Fitzcarraldo), but rather than focus on insanity or blind determination as those films do, this film is instead a family-friendly adventure. It’s as if Werner Herzog made a film for Disney.

Herzog is one of the most varied filmmakers of all time because he is interested in humanity in all its forms. It’s not impossible that he would make a fun Disney film, but it is very unlikely. Because of that, Jungle Cruise will always be an interesting watch for me as I compare it to Herzog’s river movies, and wonder what he would do differently. I like to imagine that he would try to insert more dark humor and a bit more of a focus on insanity. For instance, Dwayne Johnson’s character (SPOILERS from here on out), revealed to be one of the undead, cursed conquistadors, could be portrayed as genuinely insane due to his centuries-long life on the river rather than the pun-spewing con artist he is in the film. Johnson is a stronger actor than he is given credit for, and when allowed to go a bit crazy, he can turn in a memorable performance. Instead, he’s just the Rock on a boat.

But maybe Herzog wouldn’t have been meant to direct such a film. He has turned up as an actor here and there, most notably as a villain in Jack Reacher and The Mandalorian. I liked Jesse Plemons’s manic performance as the crazed German prince in this film (even if I somehow missed just why he is crazed aside from the need to turn any German villain in a film set in the early 20th century into a crazy person), but imagine Werner Herzog in the role instead. He would be much more menacing, and he can seem crazy without going big. I just picture Herzog talking to a bee (as Plemons does late in the film), and I think of the missed opportunity.

Herzog in The Mandalorian is probably the most Disney we will ever get, but at least Jungle Cruise provided me enough to wonder what could have been. 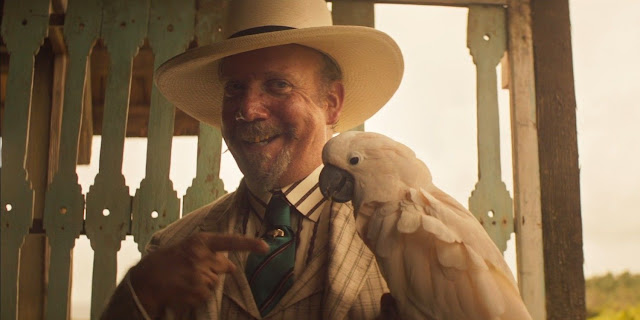 Didn’t expect this to start with an orchestral version of Metallica’s “Nothing Else Matters.”

This would be a very different movie if those swords Emily Blunt knocked down at the beginning killed those dudes, but then Jesse Plemons wouldn’t have anyone to kill…

Within the first ten minutes I got some Aguirre (because, well, Aguirre is a character), The Mummy (because of the academic love interest with a dipshit brother), Pirates of the Caribbean (because of the curse), The Lost City of Z (because of the Amazon and the historical society stuff), and Fitzcarraldo (because of the boat) vibes.

That jaguar scene looked bad, and was pretty fucking pointless. How does fighting a jaguar prove that the Rock can successfully navigate the Amazon? I’m glad it’s revealed that he set the whole thing up since the fight was so ridiculous, but it definitely felt like tacked on shit because there hadn’t been enough “action” yet in the film.

Is Paul Giammatti just the go-to now when a film needs an extra, unnecessary villain?

"I don't trust you as far as I can throw you. Which clearly isn't very far, because you are huge." At over an hour in, this is only the second time anyone has mentioned the gigantic stature of the Rock. I kind of like that they mostly ignore it, but it's also more plausible to believe in a curse that turns a conquistador into a bee monster than it is to ignore what the Rock looks like compared to other humans.

Even as a snake monster, this Aguirre isn't as crazy as Kinski's version.

Jesse Plemons is having a very good time playing the evil German.

I honestly don’t understand how the flowers at the end of the film work exactly, and why they can’t just get a ton of them. But, in the film’s defense, I kind of shut down during some of the exposition in the later part of the movie.

Posted by Eric Harris at 7:45 PM No comments: