The Evil Kurgan was entered in The Hunger Games at age 2...he won in less than an hour. 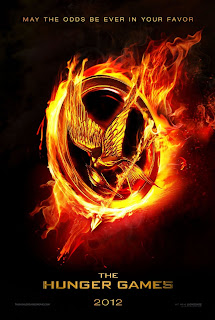 The Hunger Games is being called the new Twilight, but don't let that keep you from enjoying it.  This new franchise, adapted from the immensely popular young adult series by Suzanne Collins, can only be compared to that other tween series because it is aimed at young people and is wildly popular.  You could argue that a potential love triangle connects it to the vampire/werewolf series, but the similarities stop there, thankfully.  I say thankfully because, no offense to the Twihards out there, The Hunger Games is a film that should be enjoyed by older viewers as well as young, male as well as female.  This isn't a movie boyfriends should have to be dragged to, this is a film they should want to see as much as, if not more, than their significant others.
The Hunger Games is set in a dystopian future in which North America has been divided up into 13 districts of a new country called Panem.  The 13th district rebelled years ago and was turned into a forbidden zone.  To remind the people of that district's betrayal, all districts are forced to select (sacrifice) a male and female "tribute" between the ages of 12 and 18 to battle to the death until only one is left.  These are the titular Hunger Games and they are presented to the public as a kind of disturbing, sick reality show.


Typically, the tributes from the upper districts are fodder for the tributes of the lower districts.  In other words, people from Districts 1-3 are rich enough to train kids for the Games whereas tributes from Districts 10-12 are so poor they struggle to stay fed, much less train.  The heroine of The Hunger Games hails from District 12, which is basically the coal-mining Appalachian region of today's United States.  Katniss Everdeen (Jennifer Lawrence) is the main provider for her father-less family.  She hunts with her friend (boyfriend?) Gale and looks after her sister, Prim.  When Prim is selected to be tribute, Katniss volunteers for her, essentially giving up her life for her sister's.  Once Katniss is whisked away to the Capitol, the film really starts to take off.


The main thing The Hunger Games excels at is world-building.  Panem seems like a real place, despite the ludicrous styles of the people there.  It's a simplified world that accentuates class struggle and what it's like when you have some people destined to always be poor and others to always be rich.  Katniss and her fellow tribute Peeta gaze at their surroundings in wonder because District 1 might as well be another planet compared to their dreary, miserable home.  This obviously begs the question of the sustainability of such a government, but the film doesn't delve too deeply into that area (it is hinted at and will certainly come up in the sequels).  The only problem with this set up is the exclusion of the middle Districts.  Sure, 1 is a metropolis compared to 12 and people won't stand for that for too long, but what about 4-9?  Are these Districts decent?  How do they feel about the government?  Hopefully, it will be covered in the sequels.


The opulence of the Capitol should be enough to hold people over, though.  The styles of the everyday people are like that of pre-revolution France.  You have this upper class that is comical in its opulence (it looks like Lady Gaga picked out everyone's clothing and makeup) contrasted by this poor lower class who know only misery.  District 12 has an effective, gritty feel to it and District 1 is a shiny, futuristic beacon of hope (or maybe impending doom).


The setting trumps every other aspect of the movie, but that doesn't mean the characters are uninteresting.  Katniss makes a compelling heroine because she is methodical but has that hint of weakness that makes her more human.  Peeta is a bit dull, but that may be due to a lack of screen time more than anything.  Haymitch (Woody Harrelson), their mentor for the Games, is amusing because he is drunk and bitter, but there's a missed opportunity there to make him more of a meaningful character.  The rest of the characters are fine, if one note.


The actors all do a decent job.  Lawrence holds the screen well.  Stanley Tucci is a stand out as an “American Idol”-type host.  Harrelson is having fun, but seems restrained.  Sutherland is enough of a presence to work as the scheming President Snow.  No stand outs, but more importantly, no atrocious performances, either.  The only red flag is the casting of Toby Jones in such a miniscule role.


Action is just as important to this film as setting and character, though.  The film, after all, is named after this extremely violent event.  If you can get past the disturbing thought of children killing each other for entertainment, then the action of the film is compelling. It's toned down a bit from the book (although some scenes are still quite brutal for a PG-13 rating), but the survival elements are handled well and things move quickly.  I wouldn't sell this movie as an action film or anything, but it works.


As a standalone film, The Hunger Games has enough going for it with the setting, characters, and action to keep casual filmgoers entertained, but there is another audience that is going to dissect this film: fans of the book.  I have read the book and found it enjoyable for what it is.  As far as the film is concerned, this is a very faithful adaptation.  Sure, things are changed and characters are dropped but that is necessary when adapting a novel.  My only complaint is the lack of screen time Rue gets, but I can't imagine fans having any serious issues with this adaptation.


But this review has mainly been for the people who haven't read the book; the people who only know of The Hunger Games as the new Twilight.  Sure, there are droves of very young people going to see this movie and that usually means people over the age of 18 will hate it.  There is an exception to every rule, though.  The Hunger Games may be a tad simplified but that doesn't mean interesting questions aren't raised and important themes aren't addressed.  While it isn't high art, it is entertaining and it makes you think at least a little.  That's not the "new" anything, that's something to look forward to in the cinema these days.

I feel the need to mention Battle Royale since that Japanese film is very similar a far as the actual Games portion of the movie is concerned.  I think this film is more than just an American version of that film, though, and the sequels will hopefully prove that to be true.

There is a bit of missed potential in truly exploring society in this film.  It just seems a bit ridiculous that everyone would be that giddy about a group of kids killing each other.  No one stands up to claim this is wrong.  And it's been going on for 74 years?  I get that the government is restrictive, but surely a large scale revolt would have happened by now.  Not that big a deal, I guess, but the film would be a bit more realistic if at least some people in the Capitol seemed to think the Games were a bit savage.

Didn't get a chance to mention it above, but I liked the camerawork of the film, even if it did get too shaky from time to time.  It gave the film, especially the moments in District 12, a stark feel that clashed nicely with the polished Capitol.
Posted by Eric Harris at 7:59 PM No comments: