"Rise of the Planet of the Apes"

Ape prison? Humans and apes having a battle on the Golden Gate Bridge? Sounds ripe for a Kurgan, I know, but this film is just too interesting and engrossing. A Chigurh it is! 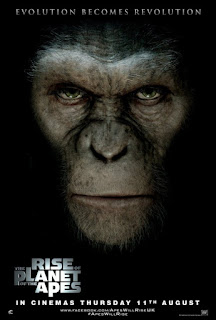 the best films of the season turned out to be a reboot of a beloved franchise. Rise of the Planet of the Apes, overlong title and all, may have been marketed as an action-packed Apes film, but it turned out to be one of the summer’s most engrossing films. Rise does the nearly impossible job of turning a CG creation into a character that you end up caring about more than the humans onscreen.

Rise is not a prequel but a reboot of the entire Planet of the Apes franchise. Starting over seems like a fine idea after the poorly received Tim Burton remake from 2001 (a film that I feel gets dismissed and bashed a bit too much). A remake isn’t all that interesting. Starting the story from the beginning and moving on from there? That sounds much better.

The film follows Will Rodman (James Franco), a scientist whose search for a cure for Alzheimer’s (his dad [John Lithgow] suffers from it) ends up creating a drug that turns a test ape into a super intelligent simian. Things go awry and Franco ends up taking care of the offspring of the ape, named Caesar. Over the next few years Caesar develops into an abnormally smart ape that isn’t sure how he fits in with the rest of the ape or human world.

Of course, anyone who has seen the original films knows where this story is eventually headed, but Rise still holds a few surprises. The most surprising aspect of the film is how much you end up caring about Caesar. He is truly the protagonist of the film and you probably won’t mind when the film leaves Franco’s character behind a bit to follow Caesar into a prison-type sequence, which is the strongest segment of the film. Caesar works partly because of the script, but the rest is due to very good CG and a motion capture performance from Andy Serkis (Gollum/Smeagol from Lord of the Rings).

Usually an entirely CG-created character just ends up looking odd and out of place, but Caesar feels like a real presence in this film. Sure, there are some less than polished moments that look a bit fake, but he looks real when he’s around human actors and that is all that counts. And Serkis does an amazing job not just in his movements but also with his facial gestures.

The rest of the cast is fine as well. Franco creates a sympathetic character, especially in his scenes with Lithgow. Tom Felton (better known as Draco Malfoy from the Harry Potter films) is perfectly cast as an annoying primate reserve worker. Brian Cox isn’t given nearly enough to do as the reserve owner, though he does what he can in his few scenes. And Freida Pinto is fine as the girlfriend character that is basically just there to be the girlfriend character.

Rise is more about creating emotion than it is about showing action, despite what the action-heavy previews may lead you to believe. The film is definitely better for it, though. There are plenty of action movies out right now. It’s nice to see a character driven summer film. And there is still quite a bit of action later on in the film and it is shot very well. Director Rupert Wyatt allows his camera to get in the middle of the action. Early on he uses this technique to track Caesar as he climbs and roams around and it is nearly hypnotic at times and that use continues with the action, giving the film a bit of style.

Perhaps most importantly, though, this film reminds you of how great this franchise can be. First off, there are plenty of little nods to the original film and most of them also help to set up a possible sequel. The film leaves you wishing the story had kept going and that is certainly a compliment. There may not be a sequel for a while, but you can still check out, and appreciate even more, the original films.

Rise of the Planet of the Apes is the beginning of what could be a very interesting and entertaining rebirth of the “Planet of the Apes” series. The attention to character and the film’s ability to create a compelling CG character are impressive enough on their own. Add some great segments, some interesting camerawork, and the promise of a new franchise and you end up with one of the summer’s nicest surprises.

I can't stress enough how much I loved the prison sequence of this film. The whole heirarchy of the reserve and how Caesar makes his way to the top was great, what with the use of cookie distribution and befriending a strongarm.

And how great were those sign language conversations with the orangutan?

I understand the marketability of adding "Planet of the" into the title, but I wish the original title of Rise of the Apes had been kept.

Here are some references to the original I noticed (you can check the boards at IMDb for a more complete list). There were a number of references to a lost space ship, referring to Taylor from the original...or setting up something for a sequel. At one point Caesar is playing with a Statue of Liberty puzzle figure. Tom Felton yells out that the reserve is a "madhouse" and even gets to deliver the classic "damn, dirty ape" line, though I felt the inclusion of that line was a bit cheesy and even took me out of the movie a bit. At one point a character is watching a Charlton Heston film (The Agony and the Ecstasy). The makeshift spears the apes use. And at one point Caesar rides a horse...which is awesome.
Posted by Eric Harris at 5:52 PM 1 comment:

Email ThisBlogThis!Share to TwitterShare to FacebookShare to Pinterest
Labels: Andy Serkis, James Franco, Rise of the Planet of the Apes

Feels good to give a movie featuring the Kurgan a...well, Kurgan.

Cowboys…and aliens. These are two things that normally 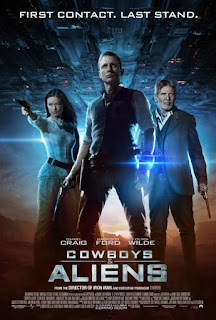 wouldn’t collide in the film world. The absurdity of the concept is exactly what makes Cowboys & Aliens work so well. The film may have a title that evokes a bit of laughter, but it is not a goofy movie. There are a few script problems but the film remains consistently entertaining. Plus, it’s nice to see a western on the big screen again, even if aliens have to show up as well.

Cowboys & Aliens plays like a regular western. A mysterious man (Daniel Craig) wakes up in the middle of the desert with no memory, a wound, and a strange metal bracelet strapped to his arm. He ventures into town and trouble seems to follow him. It turns out that he’s a wanted man who stole from a brutal cattle rancher (Harrison Ford). Ford and Craig are about to square off when the aliens attack.

There is a bit more to the story, of course, but all you really need to know is that cowboys fight aliens in this movie. As far as the action and the visuals go, Cowboys & Aliens works quite well. There are plenty of shootouts and typical Wild West action and the addition of aliens allows for some explosions and laser fire. The creature design is interesting and the aliens make for imposing villains. They are computer generated, though, and sometimes they look a little cartoonish. But there are also scenes in which they look photo realistic, so it’s a mixed bag.

Cowboys & Aliens truly succeeds when the ridiculousness of the entire premise is acknowledged. It’s amusing when you think about it. An alien invasion would be a shocking event in the present day, but imagine what it would be like to see aircraft suddenly show up if you were in the Old West? Characters expressing exasperation about the new technology is funny.

Part of what adds to the humor of the film is Harrison Ford’s performance. His reaction when he finds out what the aliens want is hilarious and his interactions with the rest of the cast are humorous. The problem with Ford’s comedic moments is that the character is set up as this brutal man but ends up being one of the more likable characters. And in a strange bit of screenwriting, Ford ends up being the father figure for almost any male character who talks to him. They should have just excised this whole setup of him as a bad man because everything he does after that claim is made is reasonable and sometimes downright nice.

Daniel Craig ends up being the more stone hearted of the two leads. He gives a stoic performance and he makes for a commanding presence in the film. Olivia Wilde makes the film better just by showing up with her disarming beauty. Adam Beach creates one of the film’s only emotionally powerful scenes as one of Ford’s quasi-sons. Sam Rockwell doesn’t have much to do but is still an enjoyable presence. Paul Dano continues to perfect his ability to play absolutely hateable characters. And Clancy Brown does a fine job as the town’s preacher.

Cowboys & Aliens is one of the most enjoyable films of the year, but it doesn’t hold up well under the microscope. Ford’s character problems and occasional spotty CG aside, the film has other problems that some viewers may take issue with. The action is fine and all, but it doesn’t seem all that polished. A lot of the final action sequence is discussed by the characters and they devise a plan but when the action occurs it all just seems to be chaos. Director Jon Favreau just didn’t seem capable of shooting a battle in a clear fashion. Instead the action consists of explosions and multiple last-second saves. It’s not terrible; it’s just not what the film had set up in the previous scenes.

Looking at the action in that way is kind of nitpicking, though. Cowboys & Aliens has enough going for it that a few minor missteps are totally acceptable. The good far outweighs the bad with this film. The cast is great and the film is a lot of fun without becoming cheesy. You can watch the film and try to find something wrong with it or you can say, “Hey, a western with aliens. Awesome!” I suggest going with the latter approach.

Random Thoughts (SPOILERS)
It's great to see Harrison Ford back in action. He's had a pretty rough run lately, but he's in his proper element in this one. And he's even giving rational interviews and everything now. This might be a turning point.

Of course Olivia Wilde is an alien, that explains her hotness.

The Kurgan as a man of God? Does that rub anyone else the wrong way?

Favorite lines: "They want gold? What are they going to do? Buy something?”

Finally, what is the deal with the upside-down boat? I assume it has something to do with those alien folk, but a little more explanation would have been nice. I do like the image of it, though.
Posted by Eric Harris at 8:00 PM 1 comment: