"Fantastic 4" Is So Plain I Almost Forgot to Review It. 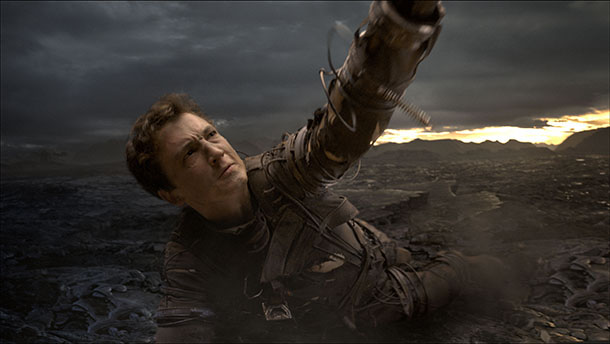 You've surely heard by now that Fantastic 4 didn't work out so well. I don't want to dwell on the film or beat a dead horse, but I do want to point out that the film is not the trainwreck that the hyperbolic fanboys of the internet want it to be. Instead, it is utterly forgettable. So forgettable, in fact, that it occurred to me a few days after watching it that I hadn't written a review for it. I'm usually pretty late with my reviews (I don't watch most new movies until Sunday), but I'm always reminding myself to get the review written. This time, I simply forgot.

Fantastic 4 had all of these behind-the-scenes problems, but despite that, the film is a coherent work. It's when it decides to shoehorn in a "save the world" plot in the last twenty minutes that it loses people. In fact, many have praised the first two-thirds of the film. I disagree. Yes, the "save the world" plot is rushed and not very interesting, but the first two thirds of the film isn't exciting either. It's your standard origin story, but told even more slowly than usual. Maybe it's just that I'm utterly sick of origin stories (Ant-Man might have been the last one I can stomach, but that was because it was a comedy, not a deadly serious movie like Fantastic 4). I get that you have to show how they got their powers, but could you speed it up? The characters aren't presented interestingly enough for the slow plod the film makes to their inevitable transformation.

That is really all I have to say about this one. There's no need to get into performances because the cast is fine; the characters are the problem. It was all so bland. Heroes get powers. Most don't want powers. Military wants powers. Military bad. Bad man shows up. Beat bad man. Set up the sequel. Granted, that's how most of these movies work, but other movies have more likable characters or humor or life or anything. Despite my vitriol, I still don't think this movie is as bad as people make it out to be. It's simply boring, which is kind of worse than it being outright bad. At least a pathetic attempt at a movie (like the first Fantastic 4 that was made just to keep the rights [incidentally the same reason this one exists]) is fun to make fun of. But this one isn't bad enough to joke about it. Now that is truly bad.

Posted by Eric Harris at 2:33 PM No comments:

Email ThisBlogThis!Share to TwitterShare to FacebookShare to Pinterest
Labels: Fantastic 4

In "Rogue Nation," Tom Cruise Proves That He Is Truly the Last Action Hero

Mission: Impossible - Rogue Nation
When Last Action Hero, the underrated Arnold Schwarzenegger action-comedy that you should definitely watch now that its meta approach to action movies can be appreciated, came out back in the 90s, it served as a prediction of the future: no more action stars to singlehandedly get you to go to the movies. Part of the joke at the time was that it seemed silly that people would eventually stop blindly going to the new Schwarzenegger, Stallone, Willis, etc. movie. But it did happen, and not just because those stars got old. There are no new automatically bankable stars anymore. Even people that appear to be bankable, like Chris Pratt, are only truly successful because of the franchise they are in. Jurassic World would have been popular with a no-name in the Pratt role. His presence added to the film, no doubt, but no one can claim that the film was a Chris Pratt vehicle. But there is one man still fighting the action star fight: Tom Cruise.

Mission: Impossible – Rogue Nation is obviously a franchise film (the fifth in the series), but unlike a Marvel movie or Jurassic Park sequel, it is driven by the presence of Tom Cruise. This is because Cruise has become obsessed with practical stunt work. The last three Mission movies would have been mediocre without Cruise in the Ethan Hunt role. The series would undoubtedly end without him. His presence, and need to do his own stunts, make the films an entertaining spectacle. More importantly, he makes them better action movies.

Today’s action environment suffers from too much computer generated material and/or nausea inducing shaky cam/quick cutting techniques. Because Cruise is the one doing the stunt, the camera needs to stay focused on him so the audience can tell he really did all the crazy stuff, such as the heavily promoted scene featuring him hanging from the side of a plane during takeoff and flight. So we can tell it’s Cruise, but we can also tell what’s going on in general. This is what makes all of Cruise’s action films so watchable.

Obviously, as far as action goes, Rogue Nation is great. There are multiple impressive sequences that adequately up the ante from the previous films. The series has become much like the Fast and Furious franchise, but better. The Mission films are better because they amp up the action while still making it very real through practical stunt work while the Furious films have amped up the action while throwing logic and practicality completely out the window. (Both series are enjoyable, I just prefer the “grounded” [I use that word very lightly] action of Mission: Impossible.)

All the action is great, but one thing that has suffered with each subsequent film is the story. Not that anyone comes to a Mission film expecting a groundbreaking plot, but it does get old seeing Ethan Hunt disavowed, on the run, rogue, etc. every single movie. At this point, shouldn’t everyone just trust him? Screenwriter/director Christopher McQuarrie (Jack Reacher) does what he can, but these movies can only cover so many different ways to save the world. To the film’s credit, one character at least acknowledges that the situation will never change by pointing out to Ethan that there will always be somebody out there creating chaos. The question is how long will Ethan (and Cruise) keep it up? The answer seems to be at least one more time since the sixth film in the franchise has been given the green light.

With the plot in the background, there needs to be good supporting actors, especially since some people don’t care for Cruise (because of his real life persona). Rogue Nation has this covered with Simon Pegg basically becoming Cruise’s comic relief sidekick. Pegg definitely keeps things light and fun throughout. Rebecca Ferguson is a bit of a standout as a female double agent who can hold her own against Cruise. But really, this is Cruise’s movie, and if you’re not on board with that, you’re not going to enjoy it.

Rogue Nation is exactly what we’ve come to expect from a Mission: Impossible movie, and that’s a good thing because you should be expecting a lot at this point. McQuarrie does what he can with the story, but he does shine as an action director here, picking opportune times to use unique camera placement within the action. And, most importantly, he knows to leave the camera on Cruise so everyone can see the crazy stunts that he is actually doing. Honestly, though, McQuarrie is expendable here. Mission: Impossible used to be a franchise for each director to put his personal stamp on it. DePalma brought his split-screens and atmosphere to the first film (still my favorite). Woo brought his trademark gunplay and inexplicable pigeons to the second (still my least favorite). And Abrams reinvigorated the franchise with his Spielberg-esque fun and action for the third. With the fourth, things changed. Cruise took over (not directing, but in general), and the series is only getting better and better because of it. Here’s to Tom Cruise, our last action hero.

I like Simon McBurney (the head of MI6), but he needs to allow himself to go bald or wear a wig. His hairline was distracting in his first scene in the film. It was mostly due to the lighting, but it looked ridiculous. Someone should have at least realized this and changed the angle or the lighting or something.

Alec Baldwin's character was mostly worthless in the film, but at least he didn't end up being the villain.

Renner was a bit of a nonentity for most of the film, due to his other job as Hawkeye, no doubt. Most of the film requires him to hang out in an office and look mildly annoyed.

The obligatory heist of the film was decent, and I really enjoyed that they brought up wearing a mask only to dismiss it. I only wish they hadn't ended up using a mask later in the film. I'm just sick of the masks...

As far as villains go, Sean Harris was all right, if not a bit too raspy/Bond-villainish. He looked a bit too much like Simon Pegg, though. If a mask was to be used, I thought for sure they would go that route, but they didn't.

The titles of these movies really makes you appreciate punctuation. It's not every day that a movie requires a colon and a dash.

Posted by Eric Harris at 4:17 PM No comments: