This might not look like much of anything, but this is a Darth Vader.  That's him hurtling through space after the Death Star blew up.  Thought it was fitting...

Writer-director Alfonso Cuarón caught my attention with Children of Men, my favorite film of 2006. That criminally under-watched film was science fiction at its best: realistic, suspenseful, and meaningful. Also, I was beyond impressed with Cuarón’s complicated long takes. These takes, which go on for minutes with intricate stunt work happening throughout, are not just gimmicks; they immerse you in the film. You almost have to hold your breath as you watch a film like that, which makes Cuarón the perfect director for a film like Gravity.

Gravity, one of the most effective films I’ve seen in recent memory, is a great vehicle for Cuarón because it’s basically a survival story set in outer space. And the best way to present a survival story is to make the audience feel like they are part of it.

Without giving away too many details (not that the previews haven’t set the film up anyway), Gravity is about newbie astronaut Dr. Ryan Stone (Sandra Bullock) and her disastrous first mission working on the Hubble Telescope. The film is a series of (nearly literally) breathtaking and often beautiful events as Ryan tries to survive. 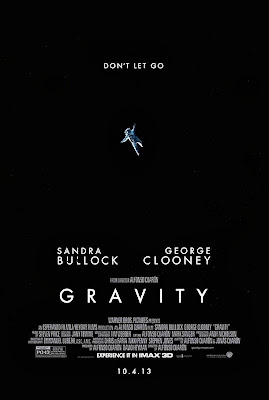 The experience of the film overshadows any story, but that doesn’t mean it’s an ineffective or trivial plot.  The film is about more than just survival.  As with most serious sci-fi films, there are undertones and themes at work.  The most dominant theme of Gravity involves rebirth after a tragedy.  There is also religious imagery scattered throughout, so the film leaves you with something to think about after you watch it, which is much more important than simply looking and sounding pretty.

Themes about survival, religion, and moving on are great, but it is important to actually care about the characters, too.  Gravity, through minimal background information and great performances, makes you care about the two main characters even though we only know them as they go through an extreme situation.  Even though most of the film is about getting problem after problem solved, I still found myself connected with Sandra Bullock’s character.  She is identifiable to the audience because she is new to space.  She is not all that calm and collected at the beginning, much like most of us would be if on our first trip.  More than that, Bullock is a likable presence.  She’s never annoying, and her reactions to the disaster around her felt real.  This is not the loud performance that won her an Oscar for The Blind Side.  It is simply her best performance.

George Clooney is the only other character that we get to see (or hear) for more than a few seconds.  While he’s not breaking new ground, there’s no one better to play the cool, collected astronaut who treats the dire circumstances with a matter-of-fact certainty.  He’s basically just being George Clooney in space, and there’s nothing wrong with that.  It was also great to hear Ed Harris as the voice of NASA command.  It brought back memories of Apollo 13, and Ed Harris just sounds like someone who should be working the radio at NASA.

Now on to what is getting Gravity all of its praise: the experience.  First off, this is one amazing film, visually speaking.  Cuarón has said that roughly ninety percent of the film is computer-generated, which is remarkable.  I’m not saying you’ll ever think this was actually shot in outer space; you might forget that every now and then, though.  At no point did I feel like I was watching some overly animated action film.  When things explode or break apart, it is incredibly detailed.  The fact that hardly anything goes “BOOM” adds to the beauty of it.  Since the film takes place in outer space, which has no oxygen through which sound can travel, the film has to rely on great visuals, slight vibration noise, and a musical score.  It all comes together to create perfectly tense moments.

Gravity is more about making you feel like you’re there than it is about making you say, “Wow.”  I watched it in IMAX 3D, and I feel confident saying that is the optimal way to see this.  The 3D actually matters in this film, as a sense of distance and depth is integral to the struggle.  (And just when I had given up on 3D…curse you, Cuarón!)  But the large screen, dizzying camera movements, lack of gravity, and the 3D can be a recipe for an upset stomach.  I heard someone a few rows away fight off vomiting for a few minutes, and I felt my stomach do a flip or two during some scenes.  Normally, that would be a red flag (and I’m sure it still is for many people), but that reaction is not accidental.  When that person near me started to retch, it was during a moment in which Sandra Bullock’s character was fighting the same urge.  If that’s not placing you in the film, I don’t know what is.  There are certainly more pleasant ways to involve the audience, but it’s still effective.  (For the record, the person was fine, and it sounded like dry heaves more than anything.)  None of this is to say that the film cannot be enjoyed in regular theaters.  Any sci-fi fan should check this out however they can.  It’s just that the IMAX experience is pretty extreme.  A truly tense film will be tense no matter the screen size or 3D.

Any film that attempts to put you through a harrowing experience and accomplishes that gets my highest marks.  I always feel stupid when I praise a film this highly, though.  The cruel internet film culture demands that anything that is critically or publicly acclaimed (or both, as is the case with Gravity) must be nitpicked to the point that a person must be ignorant to flat out love a movie.  I still have a love of film, despite the toxic online environment surrounding the culture.  A lot of the vitriol is from fans of Stanley Kubrick’s 2001: A Space Odyssey.  Apparently, you can’t love a film set in space unless you also make it clear that it sucks compared to 2001.  I like Kubrick’s film, and I still find it to be a beautiful and impressive experience.  Is Gravity better?  I don’t know.  It’s different, that’s for sure.  They are not attempting to do the same thing, so I find the comparison moot.  As for the technical side of the films, both are impressive, and I imagine both will influence film for years to come.  2001 influenced so many filmmakers that I find it hard to imagine Gravity will have the same effect, but who cares?  I just need to stay away from the IMDb boards…

Regardless of all that, the impressive work of Cuarón is hard to deny.  It’s unfortunate that he chose a project so time consuming, but it was worth the wait.  I just hope he makes something a little simpler next time so I’ll have a new film to watch in less than five years.  All of his work has paid off, though.  If it wasn’t clear by now, Cuarón has definitely solidified his role as a premiere director, and he should be mentioned quite often during the upcoming awards season.

Cuarón deserves so much praise because he has made a film that is harrowing, breathtaking (breath-holding, I should say), sickening, and entertaining.  Gravity will put you through an experience, and you’ll be glad you went through it.