This is the first "wind from The Happening" I have given in a long time.  I just hate everything about this movie.  Even if I didn't count the original film as one of my favorites of all time, I would still give this film a Nolte at best. 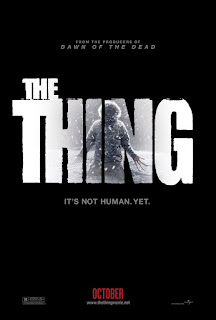 John Carpenter’s The Thing is a classic sci-fi film that many would argue shouldn’t be messed with, either as a remake or a prequel. But John Carpenter’s film is itself a remake of The Thing from Another World. You can hardly fault Hollywood for giving the prequel/remake treatment to a remake. So fans shouldn’t be angry simply because the new version of The Thing exists; they should be angry because it is pointless, CG-filled garbage.

The Thing has a very similar plot to the 1982 film. Researchers in Antarctica come across an alien life form that can replicate humans and things go badly for all involved. The original film is remembered for it’s incredibly gory sequences featuring practical special effects that still hold up to this day (seriously, check that film out on blu-ray, it looks amazing…and horrifying). More than that, though, the film was about paranoia as everyone suspected each other of being the Thing. There is a little of that paranoia in this prequel, but overall it is your basic monster movie.

The focus from paranoia to simple jump scares is a bit infuriating since it’s so lazy, but if handled in an interesting way it would be okay. But there is nothing new here and the CG monster effects are not even that well done. The alien from the original film wasn’t trying to just run around and kill everything in sight. It was trying to survive and leave Antarctica. Now, if it had to kill some humans to do that, it would. It wasn’t bloodthirsty, though. The Thing in this new film seems angry and just wants to kill. The concept of that is absolutely ridiculous. So the alien wants to get home, yet it makes a point to morph into a hideous creature and stalk around killing every living thing before it takes off? Wouldn’t it make a bit more sense if an alien that could replicate humans actually replicated a human, waited until things were calm, then snuck off? What is the point of being able to copy a regular human being if the Thing just wants to skulk around as a two-headed, screeching monster? The original Thing only turned monstrous when it was threatened or discovered. This new Thing seems to look for trouble. That would be fine if this was a flat out remake, but it’s meant to be about what happened before the original film. Since that’s the case the Thing is entirely inconsistent. An argument could be made that the alien has learned from its mistakes by the time the original film starts, but that’s stretching it.

There are just so many issues with the film simply because the filmmakers could not decide if they really wanted to remake the film or just make a prequel. So they did both and both attempts are weak. As a remake, The Thing fails to live up to the original and when it does try to do anything different it becomes laughable. As a prequel, things get even goofier as the film tries to shoehorn in elements to bridge the two films together that feels completely forced. It just makes no sense to even make this film. Aside from the problems in The Thing it’s also unnecessary since the original film gave viewers a pretty good idea of what happened anyway.

The Thing isn’t redeemed by any characters or acting, either. For one thing, there are way too many characters for any connection to be made. Then they just start getting wiped out. Acting isn’t really going to save one note characters in a monster movie, so they can’t be blamed for anything but taking a paycheck and not reading the script.

The setting could have made up for lack of character since it is such an extreme location. How hard is it to make Antarctica a character in the film? The Thing messes that up, too, since the station is so populated it never feels isolated and the cold is never really acknowledged in any meaningful way. Sure, they mention that a storm is coming in or whatever a few times, but no one ever seems to be struggling when they are outside. In fact, at one point characters are seen just hanging out on the steps outside a building without so much as a sock hat on. Who takes a coffee break outside in Antarctica?

There are literally dozens of issues still to be covered, but what’s the point? The Thing is an unnecessary, crappy mess of a film that should not exist. It has no redeeming qualities whatsoever. Avoid it at all costs and just watch the original. Hell, the 1982 film actually looks better than this “modern” one anyway.

Random Thoughts/Complaints (SPOILERS)
Why go into the spaceship if you have no intention of trying to figure out what the alien wants? By that I mean why take the film inside the spaceship. Just because it’s there? If the spaceship worked why did the alien ever leave it? It’s just nonsense.

What was with that Tetris game going on inside the ship? Was that their attempt to add something interesting to the inside of the ship? If so, it was stupid. It was strange and looked very fake and cartoonish.

Instead of a blood test they change it up and have them check for cavity fillings. That might be the dumbest thing I’ve seen in a movie this year. And yes, the ridiculousness of it is slightly acknowledged but that doesn’t excuse it.

Even the score sucked for this movie. They tried to incorporate the original score, but also tried to spice it up with drums and crap whenever something “big” was happening. It felt like Independence Day or something.

I wanted to walk out of this movie. I was tired of it after a half hour and just wanted it to end. Completely disappointing and even infuriating when compared to the original. But let me be clear, this crappy movie in no way ruins the original for me. The original will always be there and it will continue to gain new fans. Thankfully, this garbage will be forgotten by most people by the end of the month.

Email ThisBlogThis!Share to TwitterShare to FacebookShare to Pinterest
Labels: The Thing 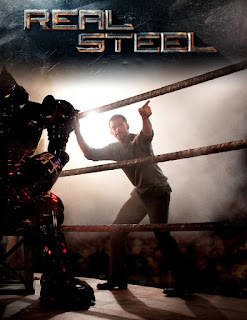 Posted by Eric Harris at 7:55 PM No comments: