Of course this gets a Kurgan, until they finally put the Kurgan in one of these movies, then it will get a Vader... 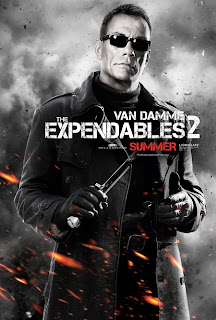 I was as pumped as everyone else when I heard about The Expendables a few years ago.  When it came out I walked away pleased, but not blown away.  As an old school action fan, just seeing the likes of Sylvester Stallone, Dolph Lundgren, Bruce Willis, Jason Statham, and Jet Li (among others and some newer stars) was enough to consider the film a success.  It helped that it included ridiculous action and a plot straight out of a Rambo movie.  But something was missing.  Before I continue, I must confess that I have an unnatural (and some might say “irrational”) love of Jean-Claude Van Damme films.  (Yes, “films.”  Not movies, but films.)

Van Damme was not in the first Expendables, much to my chagrin.  How could such a fixture of 80s and early 90s action not make it into this cast?  I was even more upset when I heard rumors that he had been offered a part, but had turned it down, due to lack of character development.  Maybe he didn’t want to be relegated to one-note status as one of the main cast as Lundgren (the crazy one) or Randy Couture (the guy with the messed-up ears) are.  If that’s the case, then he was wise to hold out because Van Damme is the best part of The Expendables   (Of course, some might claim my opinion is biased…and they’d probably be correct.)

The Expendables sticks with what made the first film a fan favorite: multiple aging action stars cause mass destruction.  This time, though, more stars are thrown into the mix and cameos from Willis and Arnold Schwarzenegger are upgraded to supporting roles.  Aside from Van Damme, Scott Adkins, Liam Hemsworth, and Chuck Norris are added to the cast.  Norris is the biggest, and cheesiest, addition, as his appearance is so tongue in cheek it’s almost not enjoyable…almost.

Believe it or not, there is a plot to this film and it’s 80s-tastic.  Van Damme plays Vilain (yes, his name is one letter away from literally being “villain”), a cult leader who wants to sell mass amounts of plutonium to the highest bidder.  At one point, Vilain ponders how “interesting” it is that plutonium can change the world, but later he simply proclaims that he wants a lot of money.  It’s simple, it’s right out of the Cold War, and it’s great.

Of course Stallone and his group of mercenaries are out to stop Vilain, especially after he kills one of their own (I won’t spoil who that is).  This leads to some truly great moments as Van Damme revels in his villainous role, toying with Stallone every chance he gets.  It’s a slightly strange performance, but it is by far the most interesting aspect of the film.  Van Damme has always been best when he gets to play nefarious roles (a serial killer in Replicant and a law breaking criminal in Double Impact), but this time he doesn’t also portray a goodie-two-shoes duplicate to even it out.  Here’s hoping that Van Damme latches onto this performance and gets more big screen work, because I, for one, am sick and tired of seeing his new movies pop up on Wal-Mart shelves at discount prices.  I’ll take what I can get, however.  And even though Van Damme’s scenes are few, they stick out as the film’s best moments.  I don’t want to spoil anything, but a kick from Van Damme has never been used in such a brutal, awesome way.  I just wish the filmmakers had made him a more prominent villain (or should I say, “Vilain”?).

Most people aren’t watching this film just for Jean-Claude Van Damme, though.  This is a movie for action junkies.  Everyone should walk away pleased with this film.  It doesn’t hold up to the truly great action films of its stars’ past (it’s hard to top films like Predator, Die Hard, and Cobra, though), but it’s certainly awesome to see some action that doesn’t involve comic book superheroes for a change.  There’s plenty of gunfire and explosions and random bad guys getting blown to pieces to keep everyone happy.  And most of the comedic action beats work.  The CG blood was a bit disappointing at times, though, and too often the action consisted of shots of the good guys firing en masse followed by shots of bad guys getting riddled with bullets.  Director Simon West (Con Air) handles most of the film well, but he is not the most adept action director.  The Expendables is still one of the most satisfying action movies in years, however.

This is a film after my own heart and I absolutely embraced it.  If you just need an action fix, you’ll probably like it.  If you’re a fan of the stars, you’ll dig all the cheesy in-jokes.  If you’re a Van Damme fan like me, you’ll love it, but you will leave the theater saying, “Man, I wish Van Damme would have been in it more.”  I’ll take what I can get, though.

Seriously, Van Damme was great, but my God, what an underdeveloped villain.  If it was a no-name actor, it would be completely forgettable.  Van Damme breathed so much life into the role, taunting Stallone every chance he got and doing some amusing physical acting.  I wanted at least ten more behind the scenes villain stuff.  Maybe explain the cult stuff a bit more.  Seriously, all we get is that they are a cult known as the "pet of Satan"?  How do you not expand on that?!  But at least there were some round house kicks and how awesome was that knife-kick scene?

What I really hoped to see was a Van Damme/Jet Li showdown (due to a long running feud between myself and a Li-loving buddy of mine).  But Li literally jumps out of the movie fifteen minutes in, just after a pretty damn awesome sequence involving pots and pans.  I'm assuming it had something to do with scheduling.  If Li wanted out, though, they could have had him get killed by Van Damme, though.  That would have given me the edge in my feud for life.

Aside from all the Van Damme stuff, my favorite moment of the film had to be when there was one dude left in the village and Stallone yelled, "One more!" and everybody unloaded on him.  The "Rest in pieces" line was cheesy, but the scene itself was hilarious.  It was like the scene from Predator, except they actually hit something this time.  Oh, and they fired for five seconds instead of fifteen minutes.

Schwarzenegger ripping the door off of that smart car (or whatever that thing was) cracked me up.  And it was just great to see him shooting a machine gun again.
Posted by Eric Harris at 10:23 PM No comments: