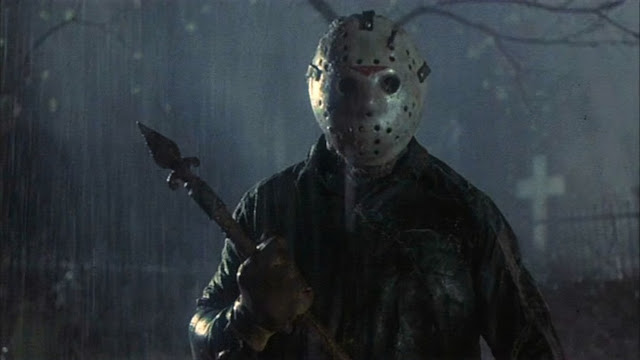 When I agreed to cover the fourth Friday the 13th movie (The Final Chapter) for the Midwest Film Journal, I decided to rewatch the entire series. And that felt like a lot of work to write just one article, so I decided come up with my ranking of the series. So here they are, with this caveat:

This is not a list determining the quality of these films. Instead, I’m ranking them based on my personal enjoyment of each film and the rewatchability of each film. Hopefully, you read this paragraph before skimming the list, because otherwise you’ll be wondering how in the fuck I could rank Jason X above the first two films in the series. For the record, I think the first two films are straight up better than Jason X, but I’m much more likely to rewatch Jason X than the first two movies. To quote Dwight Yoakum in Sling Blade: “I ain’t saying it’s right, I’m just telling the damn truth.” Finally, I do want to point out that I enjoy the entire series, and while I might trash a few films, there’s still something in each film that I love.

12. Jason Goes to Hell: The Final Friday - This was actually one of the first Jason movies I can remember seeing since it came out when I was nine. Not that nine-year-olds should be watching this shit, but in the nineties in my world it was pretty normal for kids my age to watch Freddy and Jason movies. Anyway, I remember finding it quite effective back then. But re-watching it along with the rest of the series, I fucking hated it this time. Oddly enough, the music was a big factor. The score, even though it’s done by series regular Harry Manfredini, is some cheap sounding straight-to-video shit. Then factor in that Jason is possessing people throughout the film and is barely seen in his traditional garb, and you have some real trash. I’m not against the film attempting to expand on the mythology of Jason because at this point in the series, they had to do something. But this just felt half-assed all around.

Favorite Kill - The lady getting split in half in the tent is pretty fucking gnarly.

11. Friday the 13th (2009) - There’s nothing really wrong with this reboot. It’s not as fun as I wanted it to be, despite some of the humor courtesy of the over-the-top dickhead frat guy character. It’s just unnecessary, in my opinion. There was a time for Friday the 13th movies, and that was mainly the ‘80s. Only the even-more-high-concept-than-usual entries like Jason X and Freddy vs. Jason work beyond the ‘80s.

Favorite Kill - I dig the early kills, especially the one involving the sleeping bag and Ginsberg from Mad Men getting killed, but I have to go with the arrow through the eye of the dude driving the boat. When I first watched it, I thought it was pretty fucking stupid, and upon rewatching it, it still is, but it amused me this time.

10. Friday the 13th Part V: A New Beginning - I get that they were wanting to go in a new direction and move beyond the same Jason, but the reveal that Jason was a copycat is just fucking lame. The townspeople, especially the deep South (even though Crystal Lake is in New Jersey?) mother and son, keep the film entertaining.

Favorite Kill - I’m not sure any of these kills should even count since it’s not really Jason doing any of them...but if I have to pick, I’ll go with the dipshit son on the moped just because his screaming coupled with the moped was so fucking annoying that I just wanted it to stop, and thankfully it did with his decapitation.

9. Friday the 13th Part VIII: Jason Takes Manhattan - I thought I loved this movie. I think it was the first Friday I watched as a child, and it had a strong effect on me. Much like with Jason Goes to Hell, watching it again years later, I understand the hatred the movie gets. It’s dumb as shit, even by Friday the 13th standards. But I still like it for its complete disregard for making any kind of sense. How does a boat from Crystal Lake end up in the Atlantic Ocean? Why is a tiny senior class taking an entire cruise ship for a class trip? Why does the city of New York flush their sewers with toxic waste each night? This movie asks to just fucking go with it, and I admire it for that.

Favorite Kill - For some reason, the sauna rock kill stayed with me for years, but upon rewatching it, the boxing kill on the rooftop is fucking awesome simply for how long they let the victim punch Jason just to get his head literally knocked off with one punch.

8. Friday the 13th - I know, I know. How could the film that started it off be so low on the list? As I stated at the beginning, this list is about my personal favorite films that I enjoy and will possibly rewatch. I appreciate everything this film started, but when I watch it, it feels like some obligatory assignment. I didn’t grow up with it, so there’s no nostalgia factor for me. When I watch the Friday series I mainly want to see Jason Voorhees in a hockey mask fucking people up. This is a good movie, but it’s not a Jason movie.

Favorite Kill - Of course I have to go with Kevin Bacon getting the arrow through the throat.

7. Friday the 13th Part II - Just apply everything I wrote about the original to this film, as well. At least it is Jason doing the killing this time, but still no hockey mask yet. It’s still a good movie, but I enjoy the later entries more.

Favorite Kill - The bed impalement is probably the most famous, but I have to go with the machete to the face of Mark, mainly for the tumble he takes down the stairs afterwards.

6. Friday the 13th Part VII: The New Blood - I blame Stephen King (Carrie, Firestarter) for the weird telekinetic trend in horror during this time, and that aspect keeps this from being in my top three. Otherwise, it’s a totally solid, proper Jason movie, though oddly lacking in gore. He’s fully supernatural at this point, and this movie is an example of what I think a Friday the 13th movie should be.

Favorite Kill - The original sleeping bag kill is my favorite for the entire series. It’s the perfect blend of brutality and humor that came to define the franchise.

5. Freddy vs. Jason - I fucking loved this movie when it first came out. Revisiting it, it doesn’t hold up as well as I remember, but it’s still a lot of fun. It never takes itself too seriously (how could it?), and it features some interesting kills. I’m with the bulk of the fans on some issues (not casting Kane Hodder and making Jason afraid of water come to mind), but overall this is one of the most rewatchable films in the series for me.

Favorite Kill - The dude getting bent in half in the bed is pretty sweet.

Favorite Kill - The frozen face smash is awesome, but I have to go with the sleeping bag recreation in the VR game. It took a classic kill from The New Blood and made it ridiculous...in a good way.

3. Friday the 13th Part III - Not only was this the film that finally gave Jason his mask, it also started the trend of leaning a bit more into humor and camp (pun intended) in the series. Jason feels a bit more imposing this time, though he’s still just a human, for the most part.

Favorite Kill - The kills are mostly 3D gimmicks that seem pretty silly when you watch it in 2D, but there’s still some good stuff here. My favorite is the spear gun, mainly because of how nonchalant Jason is during the entire kill. It’s like he’s just taking out the garbage...which, to him, I guess is the case.

2. Friday the 13th: The Final Chapter - I linked to my full length article about this film at the top of the page, so my complete thoughts on the film are there. But the short version is this: I consider The Final Chapter to be the best movie in the series (though not the most enjoyable, hence it’s second place status). It is the bridge between human and monster Jason, and it’s a great mix of horror and comedy. For anyone who dislikes the supernatural element that the later films embraced, this is the film for them.

Favorite Kill - There are so many to choose from for this movie. I really like Crispin Glover’s death, and the lady getting thrown out of the window, and Jason’s “death,” but I have to go with the harpoon to the dick. It’s just such a subtle kill in a franchise that seems to punish horniness.

1. Friday the 13th Part VI: Jason Lives - This is the one where they finally said, “Fuck it” and went full Frankenstein’s monster with Jason, and I love it. I’m always slightly annoyed by slasher movies that make the killer superhuman even though it’s just some dude a lot of the time. The previous films were definitely setting up the fact that Jason was more than just a regular human, but this movie made no mistake. Once that lightning hits him, it’s a new Jason. It’s the Jason I grew up with. For me, this is the easiest rewatch of the series. And the Alice Cooper tie-in song puts it over the top. I sincerely love that silly song. Jason Lives was such a perfect course correction for fans disappointed by the copycat in Part V. It’s like the fans were saying, “Yeah, we know Jason definitively dies in The Final Chapter, but who fucking cares? Bring him back anyway!” And the makers of Jason Lives did just that, and made the most entertaining film in the series.

Favorite Kill - The whole RV sequence perfectly encapsulates everything I love about the series. It’s brutal, silly, funny, and a genuinely impressive spectacle. What else could you want?

Posted by Eric Harris at 9:48 PM No comments: