October means horror movie month for me this year, so I’m not starting off with a Van Damme movie, mainly because I’ve already covered the Van Damme movies that are closest to the horror genre (Universal Soldier: Day of Reckoning and Replicant). That said, I think Hard Target might qualify since it’s loosely based on The Most Dangerous Game, which I consider to be a horror short story. Anyway, I own that one and will get to it at some point if I don’t get around to it this month. For this article, I decided to revisit one of my horror DVDs that I haven’t watched since I first purchased it: Bubba Ho-tep. 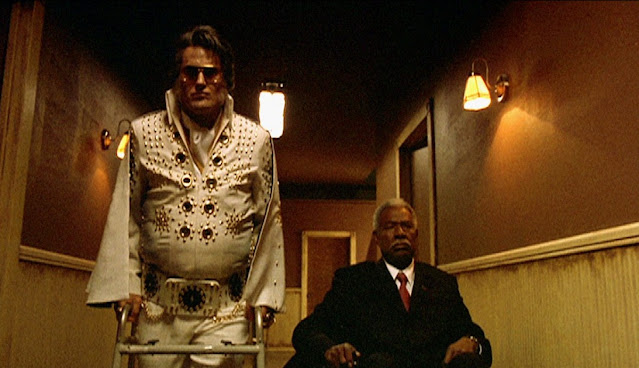 On paper, Bubba Ho-tep should be one of my favorite horror comedies of all time. It stars Bruce Campbell as an elderly Elvis, fighting a mummy alongside a now-black and somehow still alive JFK played by Ossie Davis. The zany concept alone makes it worth watching. But for me personally, the inclusion of Bruce Campbell was a big selling point because at the time (2002) I was at peak fandom for the Evil Dead star. And the kicker was the inclusion of JFK as a character because I was also at peak fascination with the Kennedy assassination at the time. I had to love this movie.

I just like this movie, which is somehow worse than hating it. I bought Bubba Ho-tep sight unseen because of the elements mentioned above. Imagine my disappointment when I found it only mildly enjoyable. This movie predates Snakes on a Plane, but it suffers from the same problem as that high-concept film. It has an entertaining, crazy premise that it just can’t live up to.

There’s nothing that I find wrong with Bubba Ho-tep, exactly. Campbell is having a blast playing an aged Elvis who can no longer get erections. And Ossie Davis is funny simply because he’s just being himself even though he’s supposed to be a skin-dyed Kennedy (there is no attempt at a Kennedy accent). And writer/director Don Coscarelli (of Phantasm fame [a series I still need to check out]) is able to stretch a small budget into a great looking horror film. I suppose the film struggles at turning a short story (by Joe R. Lansdale) into a feature film.

I haven’t read the original short story, but I can imagine that the premise of Bubba Ho-tep works much better in that short form. Here, it ends up being more like an SNL sketch that overstays its welcome. For example, a growth on Elvis’s mostly useless “pecker” is referenced far beyond humor. And, even for a film set in a nursing home, the pace is set to such a crawl that it’s easy to lose interest.

Still, Campbell and Davis, along with the effects, make it an amusing film. My expectations were just way too high for this movie. I think if I came across it years later unaware of its existence, it might have worked for me a bit more. But I was eagerly looking forward to this when it was first released, and it just didn’t wow me.

Even with my unrealistic expectations, it seems like the talent involved should’ve been able to make a modern horror comedy classic with Bubba Ho-tep, instead of the forgotten oddity that it became.

I can’t remember for sure, but I think this might be one of the rare releases I bought without seeing first. I do like this movie, but not enough to own it. I just assumed that with Campbell as Elvis and Ossie Davis as JFK (I was pretty obsessed with the Kennedy assassination when this came out) that I would love this movie. Instead, I just like it, and I don’t really ever want to watch it again.

Haven’t watched this since I first bought it seventeen years ago. I completely forgot about all the narration about having a growth on his “pecker” at the beginning. I’m a fan of the use of pecker; it’s a very underused term for penis.

“Cleopatra does the nasty.”

I let the movie play through the credits, and not only are there a few goofy credits (a warning about Bubba Ho-tep among the legal stuff and a promise of a return of Elvis in “Curse of the She-Vampires” [which is apparently a real project that just stayed in development hell]), but there’s also a bit where Elvis comes on and tells you to “be kind and rewind” before realizing that you don’t need to do that with a DVD.

That’s just an example of the era in which this movie came out. They went all out with DVDs back then. There are a ton of special features for this one, including an entire commentary with Bruce Campbell in character as Elvis. And the DVD insert booklet contains an interview with Campbell and Don Coscarelli. I don’t like this movie enough to partake in any of this shit, but I do miss the days of too many special features. I used to love taking a deep dive with the movies I really loved. Now, you end up just streaming a movie and don’t get the special features at all. And even when I do buy a movie, the special features included are increasingly basic because it’s no longer a selling point. An occasional movie gets a few interesting special features, but most releases are pretty bare bones these days.

Posted by Eric Harris at 5:58 PM No comments: