*I write these articles under the assumption that you’ve seen the movie, so...SPOILERS. Although it probably doesn’t matter much for this one.

It’s my first article of the month, so it’s time for another Van Damme movie. I started with Bloodsport and Sudden Death. Bloodsport is a straight-up classic, even with its many filmmaking flaws. Sudden Death is underrated, in my opinion, but even if you don’t like it, you can admit that it was at least a legit major studio release. I bring this up because I need to delve into the bad stuff early so I don’t end up writing about nothing but garbage for a full year. With that in mind, I’m moving on to Knock Off, AKA the one with Van Damme and Rob Schneider. I have two memories of this movie: 1. It sucks. And 2. There’s a rickshaw race in which Van Damme’s shoes blow apart. Rewatching it, I still found it to be a mess, but it did have more moments than I remember. 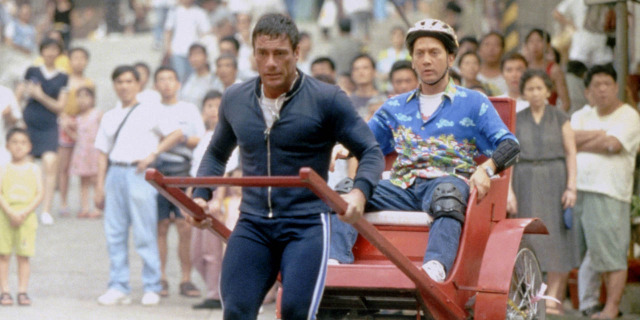 The middle of the end.

So would argue that many movies marked the beginning of the end of Van Damme’s mainstream career. But I think of his last three wide releases as a leading man as his three strikes that led to the end. It started with Double Team, the one with Dennis Rodman. (And it would probably make more sense to write about that movie first, but I go about this pretty randomly, so…) Then came Knock Off (from the same director, by the way). And Universal Soldier: The Return was the nail in the coffin (and I’ve already written about that one).

So what was it about this one that made it part of the end? I guess it’s because it was part of the attempt to make Hong Kong-style movies for widestream American audiences. That worked for Jackie Chan at first, but they eventually just incorporated his style into traditional Hollywood movies. With Knock Off, it just feels like a Hong Kong movie that happens to have Van Damme and Schneider in it. Because of that, fans of that type of cinema defend this movie. (I’m not going to waste my team looking up the articles again, but there were a few defending the movie.)

My problem with that is that I don’t like Hong Kong action movies. I’ve always found them to be too cartoonish and hectic, which is exactly what I don’t like about Knock Off. But I guess I can’t blame Van Damme or the film’s producers for trying something different with his career, because what he had been doing wasn’t working. But the end result was just too weird and silly. And the biggest sin is that the style doesn’t allow Van Damme to be a proper star. Instead, he has to run around like a cartoon character. I sincerely like Van Damme movies equally for the fight scenes and for his acting. Yes, the accent is bad at times, but I still enjoy watching him in non-action scenes. This movie felt too much in a hurry to ever let a normal scene happen.

While I find it interesting now, most of this movie was incomprehensible when I first watched it. There are green explosions. Some Russians are bad guys, I think, though their motive is unstated. Van Damme and Schneider make crappy jeans, which somehow become part of a CIA sting operation. Schneider is an undercover CIA agent. There’s the aforementioned rickshaw race. Paul Sorvino is in it. And the filmmaking in general is all over the place. (More on that in the next section.)

Because of all that, I found Knock Off more interesting than ever this time around, though I still don’t consider this to be one of Van Damme’s good movies. And it’s highly doubtful that I ever watch it again. 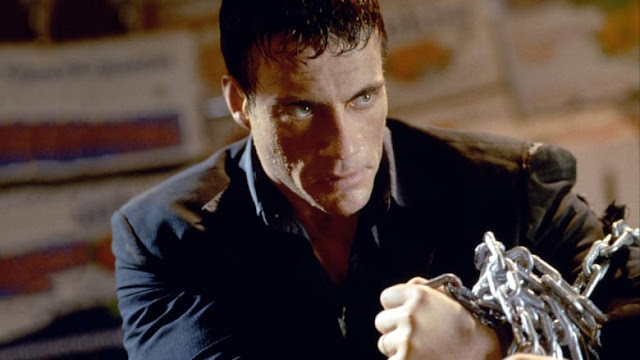 A movie bored with itself.

Aside from the “make it up as we go” feel of the plot, the film itself has a style in the same vein. There are a lot of crazy POV shots and zooms through objects. It’s definitely interesting stuff, but I found it to be needlessly distracting at best, and disrespectful at worst. I find it disrespectful because when the director decides to take the camera through a wall and into a TV screen in the middle of a scene of dialogue, that’s the director saying, “Hey, I know this shit is boring, so look at this!” I just think stuff like that should be saved for action sequences.

We are talking about a movie with Jean-Claude Van Damme and Rob Schneider. This movie should be pretty damn funny, intentionally or not, but it isn’t because the director wasn’t willing to let them carry the movie.

For example, there’s a moment early in the film when Van Damme and Schneider are being interrogated after the rickshaw race and subsequent shootout. They play the scene like coke addicts (perhaps not a lot of acting was going on in the scene…), nervously laughing throughout and making little sense. It could have been a decently comedic scene, but the movie can’t sit still. The angles change a dozen times. Dialogue is spoken while the characters are off screen. Then the camera zooms through the wall into another room. This just isn’t the style of filmmaking that should be applied to these two actors.

Of course, I could be wrong. Perhaps all of this stuff was the director trying to salvage the film. Personally, though, I would rather be able to follow what was going on with the plot and the performances rather than have a director try to distract me from it.

I know I joke around about Van Damme and his films, but I do sincerely like them. And one of the things I like about his movies is that they are simple movies. It is rare that a director of a Van Damme tries anything flashy aside from slow motion, and that’s the way it should be. I’ll definitely be revisiting one of the more classic Van Damme movies next month for a palate cleanser. 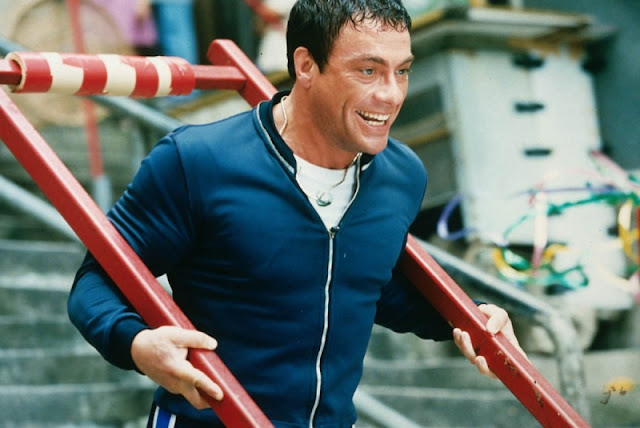 Why do I own this?

It’s a Jean-Claude Van Damme movie. But for this one, it was part of a 4-pack that included Universal Soldier: The Return, which was the reason for the purchase. By the way, there are so many multi-movie sets for Van Damme’s movies. There usually isn’t a thematic connection at all to them.

This director is really going for a style with all these random POV zooms (through the phone, into a shoe) and inserts, but it just comes off as sloppy, especially since the CG in some of the moments is so crappy.

Ten minutes in and there have been baby dolls blown up in a terrorist attack or blunder or whatever was going on at the beginning, an intro to Rob Schneider douchier than he's ever been as a fashion designer, and a rickshaw race in which Van Damme gets his ass whipped, literally, by Schneider. I have no fucking clue what this movie is about.

That rickshaw race did not have a permit? It seemed like a pretty official event with sponsors and whatnot.

Rob Schneider is much more believable as a knock off denim manufacturer than as a CIA agent.

That giant Coca-Cola billboard got a lot of screen time.

So the cops bring business people on a raid with them?

The CIA has a headquarters inside a giant Buddha statue.

Eddie's death is sudden and terrific.

They get slashed with machetes quite a few times and come away with very minor injuries. Well, they do show Schneider's wounds later, but he seemed fine until that scene.

For a little bit, the soundtrack just sounded like chirping birds for some goddamn reason.

A lot of this is like a Jackie Chan movie.

I'm just not a big fan of the Hong Kong style. It's too messy.

Way too much dialogue is spoken by characters off screen.

I like how the CIA just starts using Van Damme as an agent.

Totally forgot that they blow up a giant Buddha statue in this. Wouldn't such an explosion cause a problem for the transition from British to Chinese rule?

"You better talk right now, bitch, or I'll blow your goddamn head off! Talk!" Schneider really sells the line, but man is it unnatural coming out of Deuce Bigalow's mouth.

"Look into my pants. Go ahead! Come on! You were pretty eager five minutes ago, you little shit!"

What was with the glasses bad guy coughing?

I don't think that using the lens from your glasses as a weapon is a very good idea.

"Damn it!" Lady CIA agent as she picks nanobombs out of her cleavage.

My God, those nanobombs are fucking legit, even if they explode into green flames for some reason.

Not sure we needed the "Two Hours Later" tag…

How the fuck did Paul Sorvino survive that blast?