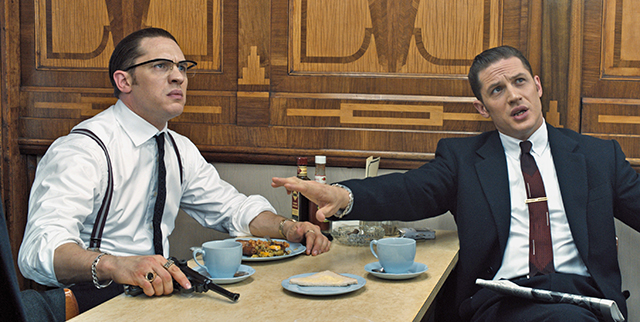 Tom Hardy seems to be an actor always looking for a challenge, which is what makes him one of the more interesting actors out there. While most of his impressive performances were physical in their difficulty (Bronson, Warrior, The Dark Knight Returns, Mad Max: Fury Road, the upcoming The Revenant), Legend presents possibly his biggest challenge: playing the real life London gangster twins, Reggie and Ronnie Kray. Hardy's two performances (which end up being impressively different) for each brother elevate what could have been a very forgettable gangster movie.

Legend has been accused of being derivative of other gangster films, but that is not really the case. True, it is about gangsters, and it is told from the perspective of a gangster's wife (Emily Browning, who was hired to apparently look constantly scared and sad), but this is not like other gangster movies because you don't get to see very much gangster activity. Sure, there are the typical violent scenes, and there are plenty of meetings in bars and hotel rooms discussing gangster activity, but you never really get to see exactly what the Krays did to become a "legend." Ronnie, the more unbalanced of the two, talks about being a gangster in nearly every scene he's in, but we don't get to see it.

Instead, Legend focuses more on Reggie's marriage. It's not that the marriage plot isn't interesting; it's just something we've seen so many times before, even if it is based on a true story. So Legend is like portions of other gangster movies because we've definitely seen the gangster's wife struggle with her husband's work. But in films that include that plot, there is also a compelling main plot involving...gangster stuff.

This is not to say Legend is a bad film; it's just disappointing because there are great scenes between the brothers that will leave you wishing that was all the movie was about. The relationship between Reggie and Ronnie is much more interesting than Reggie's relationship with his wife. Reggie is trying to be business-like gangster while Ronnie wants all out war. This, again, is not exactly new territory in a film, but to see two Tom Hardys argue and fight about it makes it much more entertaining.

Hardy devotes himself completely to both brothers. Ronnie, at first glance, is the more impressive performance. Ronnie is an openly gay paranoid schizophrenic. There's more to do there in a performance and Hardy makes the most of it. But that performance only truly becomes impressive when you see Hardy as the more controlled (though not that much more) Reggie. Hardy's performance as Reggie is the less flashy, but there's more struggle in it. Reggie cannot figure out what he is or really wants to be, whereas Ronnie seems to have always known he wanted to be a violent gangster. The performances are so impressive because they look better when compared against each other.

Hardy's dual performances make Legend worth watching. In fact, they make it worth watching more than once. Hardy single(or should I say double?)-handedly saves Legend from mediocrity. It's hard not to imagine what might have been, but what is is still pretty great. 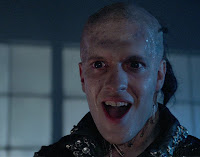 Even though Reggie is the more nuanced performance of the two, Ronnie is my favorite. His upfront dialogue and general awkwardness led to the film's funniest moments.

This is definitely near the top of my favorite Hardy performances, but Bronson is still the best. I'm not sure he'll ever top that.

Posted by Eric Harris at 8:31 PM No comments: