"The Cabin in the Woods"

Why wasn't the Evil Kurgan on the whiteboard?  Too hardcore? 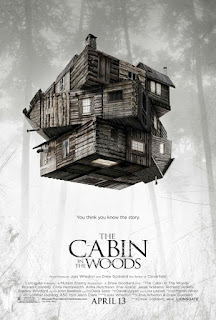 All of the talk of The Cabin in the Woods has been about critics and fans spoiling the film.  First off, the movie has been out for a few days now, so it’s pointless for me to repeat the spoiler warning crap, though I will say that the best way to see this film is with as little knowledge about it as possible.  So you should stop reading if you truly want to enjoy it (though it’s always been my opinion that reviews are best read after a viewing anyway).  The spoiler issue is misleading, though, because it sets up the movie as some twist ending ordeal, and that is not the case at all.  The film lets you in on the concept immediately, so there is no twist in the traditional sense.  If there’s anything that people should be saying to drum up interest in this film, it’s this: “Do you love horror films?  Are you tired of how predictable they are?  Watch this then.”
The Cabin in the Woods is certainly something new for horror and it’s pretty fantastic.  It takes a cliché setup (college kids go to a secluded cabin only to be terrorized and/or killed) and does something special with it.  I’ve seen this scenario dozens of times it seems and it’s become so predictable that the storyline has turned into background music.  Now, to keep things fresh you get films like Tucker and Dale vs. Evil that play with the scenario.  What makes Cabin special is the fact that the film doesn’t just poke fun at the genre and turn into goofy nonsense.  This is still a horror movie for horror fans and the more well-versed you are in the genre, the more fun you will have.

The only foreseeable problem with this type of film is the viewer not being in on the joke.  The advertising for the film has been condemned by many as selling the film as a traditional slasher flick.  I can’t comment on it because I made a point to avoid previews for the film.  I just knew from various websites that it was not your standard horror film, especially since geek god Joss Whedon was involved.  I can understand that a preview could be misleading, but if you do a little research, just a little, you can find out what type of film it’s going to be.  Okay, okay, I understand not everyone takes movie watching as serious as me.  I know there are people out there that don’t even know what they’re watching until they get to the cinema and look at the titles (you people are insane, by the way).  This is where the movie truly lets you know what it is, though.  It’s called The Cabin in the Woods!  The title itself is a joke about the overused location of the film.  No proper horror film would focus on the cliché aspects of it.  Did anyone get up in arms when the Scary Movie franchise debuted and the movies weren’t meant to be scary?  This is the same thing, only much geekier, smarter, and, arguably, funnier.

The intelligence of the film is debatable, though.  Some might argue that just because a film is aware of the clichés of its own genre does not make it smart.  I agree, but Cabin doesn’t just point them out, it embraces them and reinvigorates them.  The film features a typical slasher flick line up: the jock (Chris Hemsworth), the whore (Anna Hutchison), the nerd (Jesse Williams), the stoner (Fran Kranz), and the virgin (Kristen Connolly).  What’s great about this lineup is the fact that each of the characters has a stereotypical aspect (such as Hemsworth rocking a letterman’s jacket even though he’s a college student), yet they are still amusing on multiple levels.  It’s fun to watch these archetypes on a meta level realizing the joke is the fact that they are filling a typical role in a horror film.  There’s the added bonus that even though these characters are unoriginal, they are still much better written and funnier than any of their counterparts in a traditional horror film.

Fran Kranz is the highlight as the stoner who also seems to be the only one paying attention to his surroundings.  He gives a strange delivery of his lines that makes him stand out over the typical stoner.  It helps that his dialogue is much wittier than most stoner dialogue.  Hemsworth was born to play the jock, no surprises there (he is Thor, after all).  And Kristen Connolly handles herself well as the heroine.  The two best performances, though, do not belong to any of the typical characters of a horror film, but rather to Bradley Whitford and Richard Jenkins.

(Reminder, you should really just watch the movie.  If this review wasn’t SPOILERY enough already, it’s going to get much worse now.)

Whitford and Jenkins are absolutely hilarious as the two men overseeing the ritual to make sure everything goes to plan.  The matter-of-fact way they handle their grisly business is hilarious in the darkest sense.  A large part of their performances are simply the faces they make while they watch the events and though it would seem that cutting back to these two characters staring at a screen would get old after a couple times, it remains funny throughout.

If it sounds like I’m just absolutely loving on this film it’s because I thought it completely accomplished what it set out to do.  The Cabin in the Woods is not only a send up of the horror genre, but also a fitting entry into it.  Not everyone will love this film, though, and some will probably hate it just for being what it is when they expected it to be a “normal” movie.  Cabin tries something different and is a standout film because of it.  I don’t want to oversell it, though.  Some people are throwing some major hyperbole at this film proclaiming it to be a “game changer” that will change horror films.  I don’t know about all that, but I do know I enjoyed the hell out of this movie and if you dig slasher flicks and have a sense of humor, you will, too.

Random Thoughts (even more SPOILERS)
I loved the whiteboard list of possible baddies.  I especially dug the reference to the Deadites from the Evil Dead series.
Am I crazy or was that Joss Whedon at the after party?  I haven't come across any confirmation of this.  And it looks like he's wearing a leather bracelet like Thor would wear.  Maybe I am just crazy...
The Merman subplot was hilarious.  I really dug how Jenkins complaint about the mess came to fruition, as well.
Speaking of Jenkins, my god, isn't he awesome?  I could watch him curse at happy Japanese children for hours.
The Sigourney Weaver cameo was a bit lame.  Way too much like her cameo in Paul.
Posted by Eric Harris at 7:33 PM No comments:

"Wrath of the Titans" 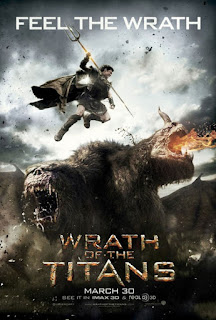