"Where the Wild Things Are" / "Paranormal Activity"

A great film about childhood. 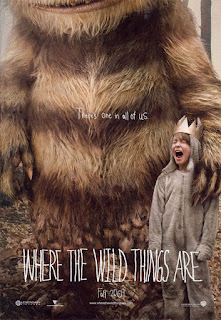 Where the Wild Things Are, based on the children’s book by Maurice Sendak, is a strange film. The director, Spike Jonze (Being John Malkovich, Adaptation) has stated that the film is more of a movie about childhood than it is a children’s movie. I completely agree with that statement, though that doesn’t mean children won’t like it. The story of an unruly, “wild” if you will, child, Max, who visits a fantasy world filled with strange, talking beasts after a fight with his mother is something that can appeal to both children and adults.

What makes this more about childhood than for children are the deeper ideas behind it. Sure, watching the wild things get into a dirt war or jump into a huge pile might be fun, but when you think about what they represent you get into levels that most children watching wouldn’t pick up on. The most prominent wild thing, Carol (voiced perfectly by James Gandolfini), truly acts like an angry child, who throws violent tantrums when he finds out that everything isn’t going to be perfect.

The fact that Carol’s actions mirror Max’s to a certain degree leads to the possibility that each wild thing represents a part of Max or at least someone in his family. I don’t want to get into that, but since it’s even possible to make connections like that it shows that this film is not just for kids. But it does deal with the emotions of a child.

The film really delves into the loneliness a child can feel at times. It seems that Max is not understood by his single mother or older sister. He feels the need to run away to a new world of his own creation; a world where everyone will be happy. But things don’t work out perfectly even in a fantasy land and Max is forced to deal with his loneliness and fear even in his imagination.

Does this sound a bit more complicated than the book? It certainly is, but I think this movie is more than just an adaptation. It’s a statement about childhood memories. If you go back and read the Sendak book you’ll find a fairly simple story about an imaginative and rambunctious 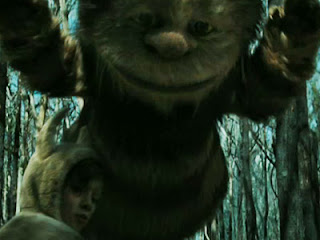 boy. Much like how you might respond to a picture of yourself as a child. You’ll see yourself with a smile and remember how simple childhood was and how you wish things could be more like that in the grown up world. But things weren’t really as simple as that picture. Childhood was not a constant happy state for anyone, though some people tend to remember it that way. Where the Wild Things Are takes those memories and shows you the darker times. It might make you remember that there were times when you wanted to run with the wild things when you were younger. It might remind you that being a child means being lonely sometimes.

So this film is a bit more depressing than one might imagine, but there is still fun to be had. For one thing, the wild things look amazing. Jonze went with a mix of practical and CG effects and they meld together to make some very realistic creatures. The visuals of this film alone make it entertaining at times and you can’t help but feel a little attached to the beasts by the end of the film.

I found the wild things to be more amusing than touching, though. If you don’t feel anything at all towards the creatures then this movie probably won’t work for you. If you buy into the world that Max creates, you’re most likely going to come away from the film with something, be it a deeper meaning, a choked up feeling, or just a smile. But the movie might not pull you in like that. It pulled me in and I had a fun time with it. I’m not going to lie; at times, it made me feel like a kid again.

This movie's creepier than Chigurh.

Paranormal Activity is the low budget horror sensation about a young couple, Micah and Katie, who decide to film themselves to get evidence of their haunting. Micah seems to find the whole situation funny while Katie takes it quite seriously. Of course, things start to get creepy. While this might sound like the set up to a ghost hunter TV show, it’s actually a great set up for a truly freaky movie.

The big question with Paranormal Activity seems to be, “Is it worthy of all the hype?” It’s certainly an understandable question. The film has been creating an internet buzz for quite some time. In fact, the film gained its wide release through an internet campaign in which one million 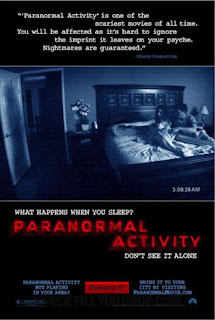 people requested it to play in their hometown. Then there are the previews (which you hopefully ignored, since the ending is arguably ruined in the TV spots) which showcase audience reactions.

My answer to that question is definitely “yes.” This movie is scary: cheap scary (its budget was only $11,000). So that means no excessive gore, no computer animated monsters, no shrill violin infused score, and no big name actors. Is that a problem? Not for me.

Cheap scary means real scary. I’ve seen countless slasher movies in which the terror is supposed to be derived from a madman with a blunt object chasing teens and while I enjoy some of those movies, I haven’t been scared by them since elementary school. I can never really imagine myself in those situations. Can I imagine being in a Paranormal Activity situation where I hear a knock, or a door creak in the middle of the night? Put myself in those positions? I’ve been in those situations. Those times alone at night where you scare yourself for no reason at all. That is what this film thrives on.

Much like The Blair Witch Project, this film preys on pre-existing fears. Honestly, if those fears don’t exist for you, then you’ll probably find this movie boring. But there might be something in the film even for the detractors. For instance, the movie is actually funny early on. Micah is the skeptic and his reaction to the haunting and Katie’s fear is hilarious at times.

The film is a slow burn, though, and the laughs stop eventually and the film becomes completely terrifying. There’s nothing wrong with that, though. It’s just surprising that the film contained so many laughs. Micah and Katie interact perfectly as a couple and their banter lightens the mood immensely. It works so well when you think about human nature. What’s the first thing people do after they’ve been scared but they realize everything is okay? They laugh. An audience at a screening of Paranormal Activity could be used as a social experiment on the human reaction to fear.

Speaking of the audience, the crowd at the theater is vital for this film. It also adds to the comedy. My theater got quite a kick out of a group that left near the end of the film because they were so scared. The audience also accentuates each fear when there’s an entire group of people hiding their eyes or screaming. I didn’t happen to hide my eyes or scream, but when that’s going on around you, you tend to tense up.

Tension is the real scare element in this film. Since the movie uses the mockumentary (á la Blair Witch Project) style, the audience is subjected to multiple scenes of the couple sleeping. It’s tense because you know something is going to happen, it’s just a matter of where. Your eyes dart around the screen, trying to catch the moment. It places you in the movie and amps up the fear. Let me put it this way: every time a night scene ended I was relieved. Not because I was bored or anything, but because it was tense to the point of being stressful.

Some of this might make it seem like Paranormal Activity isn’t an enjoyable experience. At times, a scary movie shouldn’t be enjoyable; it should make you tense and nervous. That’s what Paranormal Activity does. Does it live up to the hype? Yes. Do I ever want to put myself through the experience of it again? No way. And I wouldn’t have it any other way.
Posted by Eric Harris at 10:29 PM