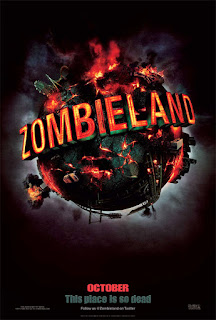 Zombieland might be the most fun I’ve had at the theater so far this year. It’s such a swift, wild ride and the characters inhabit it so naturally; it just plain works. Works as a comedy, that is.

This is not meant to be like the George Romero zombie movies (the original Dawn of the Dead). Most zombie movies deal with emotions and the mental anguish that comes with realizing your entire family and everyone you knew is dead. Sure, zombie movies of late have leaned towards comedy, most notably Shaun of the Dead, though that film is still very much a traditional zombie movie.

Zombieland, however, is a comedy first, a zombie movie second. Sure, we get the gross out close ups here and there and there are scenes of flesh eating, but the film doesn’t bombard you with it. Actually, the majority of the gross out stuff is done in the opening ten minutes.

The first ten minutes of the movie set the film’s tone perfectly. We begin with Jesse Eisenberg’s neurotic character, Columbus (every character is named after a location), delivering a voice over in which he lays out the rules of Zombieland like: Cardio, Wear a seatbelt, Beware of bathrooms, etc. These rules pop up onscreen every time they apply and it’s quite an amusing gimmick.

After the short intro, we’re treated to one of the best title sequences I’ve ever seen (but keep in mind, I love zombies). It’s a slow motion collage of terrified people running from, killing, and being killed by zombies, all set to the song “For Whom the Bell Tolls” by Metallica. I thought it was perfect.

So the world is great and the tone is set, but the characters have to match it. Eisenberg’s nervous and awkward character might rub some people the wrong way, but I thought he was hilarious. He’s been playing this same nerdy character since 2002’s Roger Dodger and he has perfected it. The fact that he is so typecast might be a problem, but put a double barrel shotgun in his hands and that image alone is good for a few laughs. And he’s the perfect actor to say lines like, “Oh, you almost knocked over your alcohol with your knife.”

If awkward Eisenberg isn’t your thing, then Woody Harrelson as Tallahassee probably is. The lovable redneck that gets a kick out of killing zombies is easily the funniest aspect of the film. He’s the kind of character most people would want to be in the event of a zombie apocalypse. Tallahassee is fearless, funny, 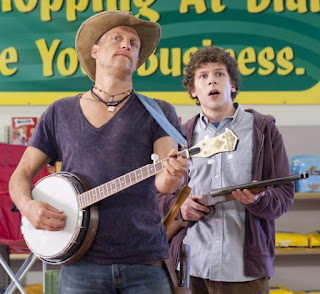 and, most importantly, original when it comes to zombie killing. Anyone who plays a banjo to the tune of “Dueling Banjos” to get the attention of a zombie then bludgeons it with said banjo gets a thumbs up in my book.

The focus on Eisenberg and Harrelson isn’t to say that the other two stars, Emma Stone and Abigail Breslin, don’t do a good job. Quite the opposite, in fact. It’s just that their con artist characters don’t hold up against the male leads. This film belongs to Eisenberg and Harrelson. It also belongs to a hilarious celebrity in a cameo role, but that’s all I want to mention about that because the surprise of the cameo is what makes for half the laughs of that sequence.

I haven’t mentioned anything negative about the film and that’s because I can’t think of anything I didn’t like. I was worried about the short running time (81 minutes) before I watched it, but I wouldn’t have even noticed the running time if I hadn’t looked it up.

A movie like Zombieland doesn’t need two hours to tell its story. If it had tried to lengthen itself to two hours, the joke would get old very fast. The filmmakers knew exactly how long they could hold on to the audience.

Zombieland is a road trip comedy…with zombies. If you read that line and you’re interested, then you’ll love this movie. If that line sounds stupid, then skip it. If you’re a zombie lover like me, then Zombieland will be well worth the price of admission.

Underneath the quirk, there's a great film.


Away We Go, Sam Mendes' (American Beauty) latest, is a surprisingly light-hearted, sometimes hilarious look at the fears that come with the prospect of parenthood and long term relationships. I call it surprisingly light-hearted because Mendes' Revolutionary Road was one of the bleakest films I've ever seen. And while I did enjoy Road, I found this to be much more entertaining and certainly easier to watch.

The film starts with Burt (Krasinski) and Verona (Rudolph) finding out that Verona is pregnant. Cut to six months later, Burt's parents are moving away (and they were the main reason why Burt and Verona are living in the same area) so Burt and Verona decide to visit friends and family around the country (and Canada) in search of a place to settle and raise a family.

At this point the film really becomes a series of chapters in which Burt and Verona come across either ridiculously strange and/or depressed couples. Most of these are played for laughs, but the film tones things down here and there and gets serious. I think the serious moments strike a perfect balance for the film since some of the crazier couples seem too ridiculous at times. Allison Janney and Jim Gaffigan are funny, but I found them a bit unrealistic. The most ridiculous 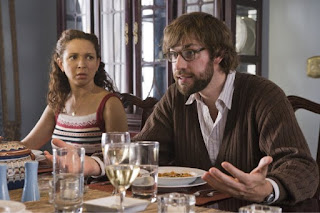 couple, however, is Maggie Gyllenhaal and Josh Hamilton as a hippie/new age type couple that believe in expressing their sexuality in front of their children and refuse to use strollers because they symbolize "pushing your child away from you." I hope that people like that do not exist, but the payoff of that sequence makes their craziness completely worth it.

Of course, to like this movie you have to like the couple on this trek, as they represent a "normal couple." I found them to be a bit pretentious at times. First off, they live in some kind of shack out in the woods, which was never really explained. Verona is sickened by Burt's need to act like he's interested in sports when dealing with co-workers. Sports! So middle class! That along with Krasinski's "drama beard" have rubbed some people the wrong way with all the quirkiness the film showcases, but for the most part I was able to get past that. I thought Krasinski did a great job. I thought Rudolph did a fine job, even though she seems to catch a lot of crap for every role she plays.

All in all, Away We Go is very enjoyable, even though some people might be put off by the quirkiness and ridiculous characters. Beneath the exterior of pretentiousness and quirkiness there is a film that most people can relate to, even if they are not in the same situation as the characters. You can imagine how you feel in their situation and, for me at least, they react exactly how I would at times. So if you can get past some of the superficial problems with the film, you'll probably enjoy it.