A little slow at first, but then...Ninjas! 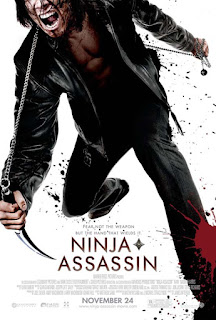 Ninja Assassin...when a film has a name like that there should be no mistaking what you are about to see. Ninja Assassin is about a clan of ninjas that assassinate people; fairly simple, and awesome. There's a story in there about lost love and whatnot, but if you are considering watching this movie at all you are mainly concerned with the action, so I'll save the in depth plot synopsis for later.

The action in Ninja Assassin is pretty impressive at times. After all, this is from the filmmakers behind The Matrix trilogy and V for Vendetta. The movie starts off extremely violent as practically invisible ninjas cut a room full of gang members to pieces...literally. The film slows down to a crawl after that sequence, however, but does regain momentum in the end. It slows down to get into that pesky plot I mentioned earlier, which I think was a misstep by the filmmakers, but back to the action. I referred to the ninjas as invisible because this film emphasizes the shadow warrior aspect of ninjas. That may sound cool and everything, but it's not necessarily fun to watch. Just hearing a woosh! followed by a limb being cut off or a splash of computer generated (CG) blood is okay here and there, but when it takes up entire action scenes it can get kind of boring. The action is much better when the ninjas are forced to fight near a light source. So struggle through the boring middle of the film and you'll be pleased with the last half hour of the film, as I was.

One thing that is prominent even in the extremely dark action scenes is blood. This film is absolutely drenched in CG blood with a little bit of practical blood as well. I'm a traditionalist, so I prefer my onscreen blood to be good old fashioned corn syrup and red dye. I had a problem at first with all the CG blood, but eventually it just became comical and made some of the dark scenes funny. So I don't mind the CG when it's overused to the point of being funny, but I find it hard to believe that using a computer is cheaper than mixing syrup and dye. Maybe it isn't such a big deal to other people, but I assume if you're into movies like this, then you have a stance on the fake blood issue.

The film slows down into boring, but bloody, territory because the filmmakers felt obligated to 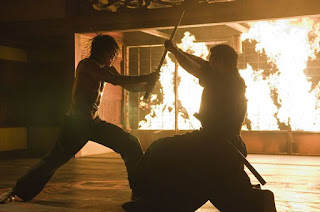 give a reason for all the violence. Personally, I don't need a good reason to watch ninjas do battle. Just let me know who the good guy is and who the bad guy is and let them fight it out for a sacred relic or something. This film, however, felt the need to make this about a Europol agent (Naomie Harris, a.k.a. the voodoo lady from the Pirates movies) who is searching out the ninja clan behind assassinations over the last few centuries. Her story is cross cut with that of Raizo (Korean pop star/actor Rain) who trains in his apartment while he has flashbacks from his childhood within the ninja clan (they take orphans in to replenish their clan). I don't mind martial arts training scenes, but I thought there were far too many in this film. If they had been done in the vein of Kill Bill Vol. 2 they could've been much more entertaining. And then there's a whole forbidden love angle tossed in there that could've been set up in much less time as well.

Of course the Europol agent and Raizo cross paths eventually and team up to survive against the hordes of ninjas stalking them. This is when the film gets its much needed jumpstart. I can't stress enough how much the last half hour saved this film. I went into this movie expecting insane ninja action and the middle of the film didn't deliver on that at all. But by the end, I was just waiting for characters to start yelling, "Ninjas!" (pronounced NEEN-juz, of course). The last part of the film is the fun, crazy time promised in the previews and it made it all worthwhile for me.


Gomorra - Directed by Matteo Garrone - Not Rated (easily an R rating, though)

Might not be a regular mafia movie, but it's still interesting. 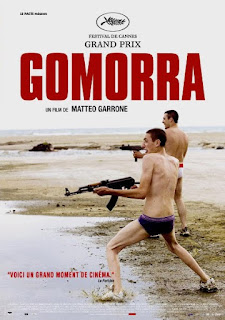 First off, Gomorra is easier to enjoy if you have a little backstory. The title is a play on words, referencing the biblical cities Sodom and Gomorrah and the crime syndicate of Naples, Italy known as the Camorra. It is based on a book of the same name that exposed the actions of the Camorra and the author of the book is supposedly under police protection for life because of the threats he has received. So this is not a glorification or celebration of the mafia lifestyle. In other words, this film isn't going to be considered cool or "gangster." It has a City of God feel to it but with more of a focus on realism and less on style. If you're looking for the Italian version of Goodfellas, you won't find it here. But it's still a good film and it may stick with you when it's over.

Gomorra consists of five intertwined stories that are not directly related to each other, but share a connection through the Camorra. There's Toto, the young grocery delivery boy who's trying to get his start in the mafia. There's Roberto, who is exposed to the corrupt side of waste management. There's Don Ciro, a money runner who is caught in the middle of a mafia war. There's Pasquale, a fashion designer who sees that some people take clothing design very seriously. And finally there's Marco and Sweet Pea, two young hoodlums who keep stepping on the toes of the local mafia. I mention Marco and Sweet Pea last because I felt that they represented a strong message. We first see these characters as they play act a scene from Scarface. These are the kids that grew up glorifying American portrayals of crime and want to live out their Hollywood fantasies with a very real mafia. I saw Marco and Sweet Pea as Gomorra's way of saying, "Hey! This lifestyle is not glamorous." I'm not knocking Hollywood mafia films or anything (I count most of them among my favorite films of all time) but they do glorify the lifestyle quite a bit, even if it's not intentional. There's no mistake that Gomorra is a condemnation of the mafia lifestyle and Marco and Sweet Pea's story is the best example of it.

Don't confuse my focus on Marco and Sweet Pea as a putdown to the other storylines. They each have their moments and I found all of them compelling, I just found Marco and Sweet Pea to be the most interesting. I suppose it is because they struck me as realistic and dangerous. The scene in which they fire guns just for the fun of it is chilling. They cheer and yell like five year olds as they fire off automatic weapons as if they were toys. They are toys to them. They have no fear of repercussion for any of their actions and their lack of respect to their superiors (even if the superiors are criminals) is disturbing. They were the most annoying characters in the film, but also the most important.

The film is not perfect or anything, though. I think it would have been better if one of the characters was dropped, but I suppose the diverse stories give you a better overall picture. I just wish that picture was a bit more succinct. And I don't know how realistic the music choice was, but these gangsters listen to some awful music. It was distracting at times, but when you're being immersed into a different culture, issues like that are bound to crop up.

There's really nothing else to say about this film. It may be a bit hard to follow, but if you devote some time to it you should come away with something. You may not be entertained and you may be disappointed, especially if you're going in hearing claims that it's the best mafia movie in years. (It doesn't help that the film starts with the words: Martin Scorsese presents...) But if you give it a chance and go in knowing that it's not a "normal" mafia movie, then you will probably come away pleased.

Gomorra is available on DVD.
Posted by Eric Harris at 3:49 PM