*I know A Serious Man has been out for quite some time, but a theatre withing driving distance finally got this film (thank you, Kerasotes of Evansville) and The Road is still stuck in limited release hell, so I'm going to go with the newest film from my favorite living filmmakers, the Coen Brothers.

I was going to give this a Vader, but it only makes sense to give a great Coen Brothers film a Chigurh. 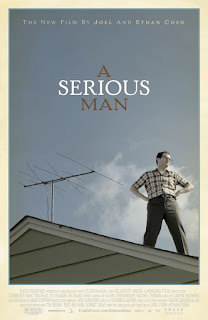 I am very glad that the Coen Brothers, riding high from the success of No Country for Old Men and Burn After Reading, were able to make this personal film about physics professor Larry Gopnick (Stuhlbarg) and his struggle to deal with a plethora of problems. That synopsis sounds a bit vague (and boring), but it's a bit hard to explain the story without giving a spoiler filled interpretation. I suppose the best way to put it is that this film is an adaptation of the Book of Job, set in the late 60's in the Midwest. If you're not familiar with the story of Job from the Bible, I certainly suggest that you at least look at a synopsis of the story before you watch this film. That was the extent of my research before I saw this and it made for one of the deepest viewings of a film I've had this year.
The religious connections do not stop at the Job adaptation. This is also a film that is very much about the Jewish religion. And the film starts with a kind of Hebrew folktale about curse being visited upon a family. That emphasis on religion leads me to base my interpretation almost completely on the Book of Job. Though it is not a literal translation by any means. More of a "inspired by" take on it rather than a "based on."
There is a basic story to the film, though. Larry's wife, Judith, wants a ritual divorce so she can marry Sy Ableman (a terrific Melamed). Divorce is troubling enough as it is, but matters are made worse as Sy and Judith try to work out the details with Larry and can't seem to understand why he might be upset by any of this. Larry, for his part, seems utterly befuddled by the development. Larry also has to deal with his troubled brother Arthur (Kind), a pot-smoking son, Danny, who seems to only need his father to fix the TV reception, a daughter who only cares about her hair, financial problems, the possibility of not receiving tenure at his college, and a Korean student who is attempting to bribe him for a passing grade. In other words, Larry's life isn't going well and he doesn't understand why any of this is happening.
While this all sounds a bit depressing, the film is actually very funny. The Coens are masters of the awkward conversation and A Serious Man has them aplenty. Every interaction featuring Sy Ableman was hilarious, the excessive cussing of Danny and his friends had me laughing every time, and the meetings with the three rabbis were extremely funny. There are no real stand out comedic set pieces, but the film has general funny undertone to it. Think more along of the lines of Miller's Crossing or Fargo type humor rather than the blatant comedy of The Big Lebowski or O Brother, Where Art Thou?
The comedy hinges on one performance, though, and Stuhlbarg completely delivers. He is perfect at playing the exasperated Larry. What impressed me the most about his performance were his facial gestures. Stuhlbarg is able to convey so much without speaking and you really feel for the guy, even though you'll be laughing at his misery throughout. Here's hoping that he's recognized this awards season.
Laughing at someone's misery certainly doesn't sound like a good time, but the Coens pull it off. This is dark comedy at its finest. I thought that Burn After Reading was a bit too dark and unpleasant at times, but they found the right groove for this film.
The comedy makes this film entertaining but it's the deeper meaning beneath the story that 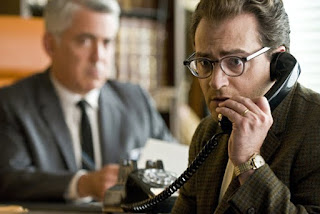 makes it a lasting and rewarding experience. There are too few films out there than can make me laugh aloud while watching it and then have a serious and lengthy conversation about it when it's over. A Serious Man goes to show that a deep film doesn't have to be utterly confusing and humorless.
I'm a bit biased when it comes to Coen Brothers films, but I have to say that this is easily one of the best films of the year, possible even the best. I don't consider it their best film, though (to me, Miller's Crossing is the Coens at their best), but time will tell on that one. The Coens have a way of making films that get better with age and this one will definitely hold up well. For now, I count it among their best and that is saying something.

I feel the need to add a couple SPOILER-filled paragraphs discussing the point of the film and what the ending meant to me. So please stop reading if you haven't seen the film yet.
A Serious Man ends with Larry getting a phone call from his doctor with presumably bad news. 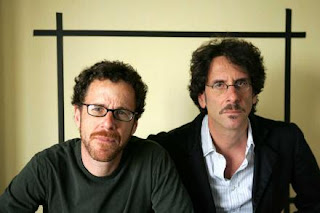 While he's receiving this news a tornado is heading towards his son. That's not the important part, though. What's important is what happened right before the phone call. Larry gives in and accepts the bribe from the Korean student and just as he pencils in a passing grade for him he gets the call and the tornado heads toward his son. To me, this was Job/Larry failing the test that God was putting him through. (I know that Job passes in the Bible, but remember I consider this to be inspired by the story, not based on it.) The whole film was a trial of sorts for Larry and he failed miserably and got punished for it.
To back this claim up, think back on Danny's constant complaining about the TV reception. Larry has to go on the roof to mess with the antennae. As he twists and turns it he can hear reception coming in and out, like someone is trying to reach him but just can't get through. I don't think I'm off base in thinking that this is supposed to represent God's attempt to reach Larry. I feel that I am backed up by this since the poster image of the film features Larry on the roof next to his antennae.
Just my two cents on what it all meant. I'm sure there are other interpretations that are just as "right" as mine and that's another aspect that makes this film great.
Posted by Eric Harris at 4:45 PM