Looks great, but it's hollow inside. 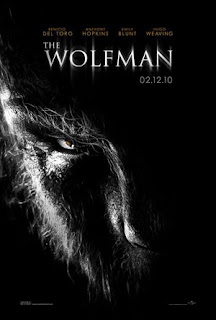 I am not a fan of the new trend of whiny vampires and wolf boys. I prefer my vampires to be menacing, and I think that a wolfman should be a mindless, bloodthirsty beast, not a teen heartthrob whose only acting “trait” is his ability to not wear a shirt. If you’re in the same boat as me, then The Wolfman will at least satisfy you in the monster department. If you’re expecting much more than a savage monster movie, though, you may leave the theater disappointed.
My expectations for this film were very high. The preview for the film is great and leads you to believe you might be in for something different, or possibly something great. I knew all about the delays of the film and the reports of editing up until days before the release, but the preview made me forget all of that. So, because of that preview, I thought this version of The Wolfman would be very similar to Francis Ford Coppola’s version of Dracula (one of my favorite films). Sadly, aside from the atmosphere created here, The Wolfman pales in comparison.
That’s not to say this film doesn’t have something to offer. It looks great. Late 19th century England has a gloomy and realistic look. The sets were particularly well done. The creature effects are fine, for the most part. The transformation sequences were by far the best, but some of the action scenes had a few flaws and looked a bit fake. I know I comment on special effects and cg quite a bit, but for a film like this, the effects are absolutely vital. If the wolfman effects looked even slightly goofy, the film would be ruined. Thankfully, I never had to fight back laughter when I saw the creature.
The film has a look to it, but it’s missing a mood. I never got a sense of foreboding or evil while I was watching this film. It was all just happening and I didn’t really care all that much about any of it. That might be the fault of the storyline, but I think it has more to do with pacing. The film starts off at a crawl, with stage actor Lawrence Talbot arriving at his father’s old, creepy mansion. His brother Ben has been killed and he intends to find out what happened. His off-balance father (Anthony Hopkins) and widowed sister-in-law (the beautiful Emily Blunt) are still there to help out. But there is no mystery. We know what killed Ben: a crazy wolf creature. We don’t need multiple scenes with villagers talking about what might be happening.
It’s not just the first mystery that is weak, either; it’s the entire film. At no point did I wonder what was really happening. It is painfully obvious what is going on from the get go. This isn’t all that terrible, but when the filmmaking is so-so, it makes the story issues much more blatant. These problems are nearly overshadowed by the visuals, but good set design and cg can’t fix everything.
The film does pick up in the middle, though. The asylum sequence was great and it made me wish that the majority of the film took place there. This is the problem. There’s this great, interesting sequence in the middle of the film, bookended by a bland, obvious plot. I probably shouldn’t use the word “bookend,” though, because that implies that this movie has an ending. It doesn’t, not really. It just stops. I don’t know what they were going for, maybe some kind of sequel set up, but there is a key issue that really should’ve been resolved at the end and it was just left open, pointlessly open.
The actors do their best to overcome these plot issues. Del Toro does a fine job. He has a 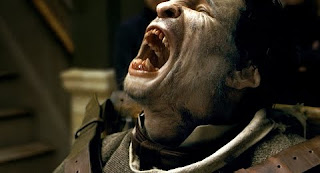 presence that seems to fit with the time period. Blunt makes things a bit interesting here and there. It was nice to see Hugo Weaving as the Scotland Yard detective. He is a master of the intense stare, which is all he really gets to do with the role. It’s Anthony Hopkins who steals the show. You can tell he really enjoyed making this film and it makes for a very fun performance. I enjoyed every minute that he was onscreen.
The Wolfman looks great, features some good performances, has bloody, brutal action, but lacks the story and substance of a great film. There are a few great moments in the film, but they are too few and far between. This film garners a rental at best.
Posted by Eric Harris at 7:48 PM