The Evil Kurgan likes his comedy as weird as possible.

Gentlemen Broncos is the latest film from Jared Hess (Napoleon 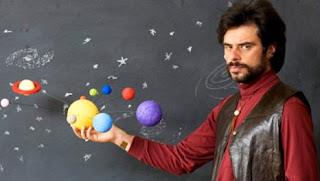 Dynamite, Nacho Libre) and if you haven't heard of it that's because the studio barely gave it a theatrical release. But it's finally on DVD and I thought it was well worth the wait. But if you didn't like Hess' previous films, then I can almost guarantee that you won't like this one.
Gentlemen Broncos is about Benjamin, a home schooled teenager who loves to write fantasy fiction. The story revolves around Benjamin's fantasy novel, "Yeast Lords: The Bronco Years." His new friends try to make a film version of it and his favorite author, Ronald Chevalier (Clement), steals the story and publishes it as his own. This premise allows for the film's strongest point: the fantasy story sequences.
In these sequences, a hilarious Sam Rockwell plays both Bronco (Benjamin's bearded, redneck hero) and Brutus (Clement's altered, "tranny" hero). Each version is hilarious and Rockwell is impressive in his second multiple part role of 2009. I don't want to spoil any of his lines, but I found nearly everything he said to be funny.
But it's all a different kind of funny. This is not broad comedy (even though it does feature a decent amount of gross out humor - more on that later). I hate to use the word quirky since it is how every Hess movie is described, but it is perfectly fitting. This is a quirky movie. It's very weird at times and sometimes the jokes need a few minutes (or even a second viewing) to sink in. Once you accept that it is goofy and some of it makes absolutely no sense, then you should free yourself up to laugh quite a bit.
The gross out humor might turn some people away. In fact, everything I've come across that is negative for the film (of which there is plenty) has mentioned that Hess has relied on gross out humor to salvage any comedy for this movie. I would completely 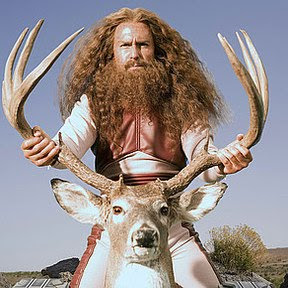 disagree. Sure, the movie is gross at times (the snake defecation, the puke-kiss, etc.) but it certainly doesn't rely on it. In fact, I found some of it a bit funny.
The gross out humor doesn't make the movie or anything, though. Gentlemen Broncos is all about the fantasy sequences and it's other comedic weapon: Jemaine Clement. The "Flight of the Conchords" star is absolutely hilarious in this. I read that Hess asked him to read his lines like Michael York and that is obviously going on and Clement nails it. His voice makes mediocre lines funny. But it helps that he has some of the best lines of the film as well. If nothing else, I suggest that everyone watch Clement's scenes in this film (which is something that even the negative reviews suggest). He even gets the funniest prop: an ever present bluetooth headset that he never uses. I just wish this film would have gained a larger audience so Clement could get some bigger roles.
Gentlemen Broncos isn't for everyone, but it's certainly for more people than the studio gave it credit for. This is not that different from Hess' earlier work. I think it stands right up there with Napoleon and Nacho. Maybe you won't like it as much as me, but I definitely think you'll find yourself laughing if you give it a chance.

As utterly pointless and annoying as Bruce Banner's dad.


It's no secret that I am an unapologetic Jean-Claude Van Damme fan, so it shouldn't be 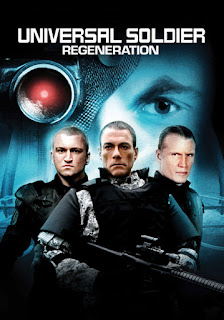 a surprise that I decided to review this direct to video (DTV) release since I didn't catch anything new at the theatre this past weekend. How could I not review the return of Lundgren and Van Damme to the Universal Soldier franchise?
Unfortunately, I don't have much to say about this one. I was honestly expecting this to be Lundgren vs. Van Damme for an hour and a half with Andre Arlovski (a former UFC fighter) peppered in here and there. What I got was a starring vehicle for Arlovski, in which Van Damme doesn't factor in until the second half and Lundgren only features in for about fifteen minutes. Am I wrong in thinking the only appeal for this movie was Van Damme and Lundgren? If I am, and you're just looking for a mediocre action film, then by all means, rent this one.
If you're like me, though, I think you should save your time and money because this one was honestly disappointing. It has it's moments, sure, (the showdown between Van Damme and Lundgren was great but oh so short) but when I see Van Damme on the cover of a movie, I expect him to be the star. On top of that, the plot is some ridiculous Cold War-esque crap about a bomb blowing up Chernobyl. I wish they had had the budget to take this one out of Eastern Europe because it seems like that is the only place Van Damme films a movie these days.
I need to write a bit about Arlovski. It befuddles me as to why he would get more screen time than Van Damme or Lundgren, because he doesn't have half the screen presence of either of them. It would have been much better if his role didn't exist at all and Lundgren played the enemy unisol that Van Damme was brought in to take down. On top of the lack of screen presence, the choreographer obviously got pretty lazy with Arlovski's scenes because ninety percent of his fight scenes end with him on top of the guy punching his opponent's head repeatedly into the ground. Which would be fine if it was really brutal and only happened once or twice. But it's borderline comedic and it happens every five minutes it seems. At one point a guy jumps out a window and a few characters run over to look down at him. While they're watching, Arlovski trots onscreen and does his punch deal to the obviously unconscious body. It's just pointless and annoying, which kind of describes the entire film now that I think of it.
I was hoping that Van Damme would make a legitimate comeback after the praise he received for JCVD, but he went right back to his old ways with this one. What is really infuriating is that he turned down a role in The Expendables to make another video release that is most likely as mediocre as this film.
Universal Soldier: Regeneration is a failed attempt to rejuvenate a dead franchise and I'm afraid it also re-solidifies Van Damme as a strictly DTV star. Skip this unless you're a die hard like me and if that's the case, you've probably already seen it anyway.
Posted by Eric Harris at 4:32 PM