The Kurgan would fit right in with these guys.

Hot Tub Time Machine: your response to the title alone should indicate 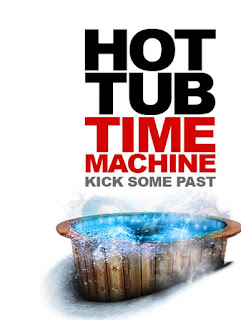 whether or not you're going to like this ridiculous comedy. I heard that title the first time and thought, "Awesome." If, on the other hand, you think it's the dumbest movie title you've ever heard, then you're probably not going to be in the right mindset to enjoy this one.
Hot Tub Time Machine is about three friends, Adam (John Cusack), Nick (Craig Robinson), and Lou (Rob Corddry), who have grown apart (and miserable) since their heyday in the 80's. When Lou accidentally attempts suicide (by rocking out and revving his car in a closed garage), Adam and Nick decide a reunion at their favorite ski resort should bring Lou out of his funk and bring the friends back together. Oh, and Adam's nephew Jacob (Clark Duke) is along for the ride as well. So they get to the resort, which is now dilapidated, start partying in the titular hot tub, and wake up in the 80's.
Obviously the movie is a bit goofy, but what hooked me in was the realistic portrayal of friendship. These guys aren't sappy buddies who are always there for each other. These friends are brutally honest and they are constantly hurling insults at each other. Maybe that doesn't sound like friendship to some people, but to me, it rings pretty true. It's also a good recipe for comedy. Let's face it, insults can be really funny when their aimed at fictional characters.
The characters here are nothing new, but they are all believable. But this is not a character piece, so it really boils down to the performances. I've never been a fan of Cusack (and even after this film, I still don't care for his acting), but I could abide him in this film. Clark Duke plays the exasperated dork very well. But it's Rob Corddry and Craig Robinson who make this film. Corddry's hard partying loser is obnoxious, idiotic, and hilarious. And it helps that he gets some of the dirtiest and funniest lines of the film. Robinson's character is bit more reserved than Corddry's, but he's just as funny. His deadpan delivery coupled with his exaggerated outbursts make for some great scenes. It's safe to say that if you've liked anything Corddry and Robinson have done in the past, then you'll definitely like them in this one.
Hot Tub Time Machine also features some amusing supporting performances. Crispin Glover was by far my favorite. Glover plays a one armed, bitter bellhop in the present, but a happy go lucky two armed man in the past. You can imagine what the running gag is from this scenario. Some might feel that it runs its course after a couple times, but I laughed every time he was in an "arm loss" situation. Also amusing is the appearance of William Zabka as a sleazy gambler. That name might not be familiar, but you've seen this guy before. He was the young villain in multiple 80's movies, including The Karate Kid.
That's not the only nostalgic 80's moment in this film, but the era isn't exactly a major part of the movie. You get the obligatory "in the past" scene that pokes fun at the technology, clothing, and hairstyles, but aside from that and the soundtrack, the 80's aren't focused on all that much. It's more about these characters being young again and the consequences of messing with the past. I'm fine with that, but I think the filmmakers could have capitalized on 80's movies a bit more. I would have 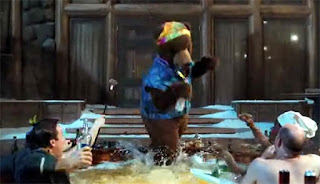 loved a cheesy montage, or maybe the side plot with the preppy ski patrol guys could have been expanded. But it's only a minor gripe in an otherwise very funny movie.
There are other issues I had with the movie, though. Cusack's love interest scenes felt a bit forced and they really slowed the movie down near the end. And some jokes just fall flat completely. But there are definitely more hits than misses.
Hot Tub Time Machine isn't going to go down as a comedy classic or anything, but it's certainly worth watching. It may be too stupid for some people, but if you hear that title and you laugh a little bit, then odds are you're going to enjoy this one.
Posted by Eric Harris at 9:45 AM