*It was another slow week at the theatre; I didn't want to watch Gerard Butler butcher yet another American accent in The Bounty Hunter, Diary of a Wimpy Kid isn't exactly my demographic, and Repo Men just doesn't look good enough to drop eight bucks on (though I will definitely watch it on video). So this week I'm reviewing another batch of video releases, but there is a light at the end of the tunnel with Hot Tub Time Machine this weekend followed by Clash of the Titans the week after.
Triangle - Written and directed by Christopher Smith, starring Melissa George - Rated R

The Evil Kurgan was interested in this one, but just a little bit...

Triangle is a film in the same vein as 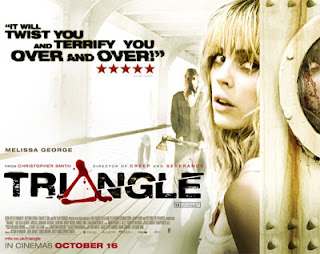 Timecrimes. (If you're unfamiliar with Timecrimes, I suggest you check it out, especially since I think it's a bit better than this film.) It's definitely a mind bending movie and there's enough going on for there to be plenty of discussion once the film is over. What I mean by that is that there are references to Greek mythology that leave things open to the viewer's interpretation and that's always a good thing, in my opinion.
The film is about Jess, a single mother/waitress whose child suffers from Down syndrome. She is invited on a boating trip on a yacht named "Triangle" and everything is going well enough until the ship is hit by a sudden storm that leaves it capsized. The group is found by an ocean liner and then things get weird. I don't want to write anymore about the story because I feel that even giving a general description of what the bulk of the movie is about would be a spoiler.
That probably tips you off that this movie is a bit out there and that is absolutely true. Anyone looking for a straightforward thriller that takes place on a boat would be better off watching Ghost Ship. Triangle is anything but straightforward. But it is not one of those needlessly complex movies that will leave you annoyed when it's all over. I think anyone who pays close attention while watching this film will at the very least have a general idea of what it's all about.
Personally, I didn't think this film warranted an in depth interpretation. This isn't Stanley Kubrick we're dealing with here, after all. But the film is interesting and it kept me guessing throughout without ever becoming boring or ridiculous. I can understand some people giving it a closer look, though. Like I said, there are elements to be explored with this film, I just didn't want to explore them for more than a few minutes.
If you want a more pleasing and worthy film, I suggest Timecrimes, but if you can't be bothered with subtitles and still want a decent mind bender, then by all means, watch Triangle.

And you thought Commodus' crush on his sister was disturbing...

Precious is a difficult movie. I don't just mean that it's about the very difficult 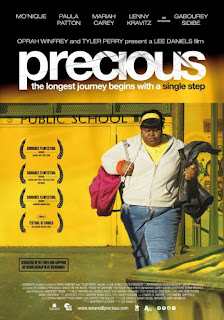 life of the title character, but it's also difficult to review. If you think that all movies are meant to entertain, then you may not like this film. I didn't find it entertaining at all. The subject matter is just a bit too bleak to allow for entertainment with this one.
Precious is about an obese teenager from Harlem who has an abusive mother, is pregnant with her second child (the first one had Down syndrome) and is being kicked out of school. Oh, and the father of her two children is her own father. And her mother forces her to eat so she stays fat. And her mother physically abuses her. And her mother verbally abuses her. And...you get the point. If you find enjoyment out of any of that, then there is something wrong with you.
But this movie is not meant to be entertaining. It's meant to be hopeful. I suppose it might succeed on that level with some viewers, but I just felt tired after the first hour. The filmmakers created such a miserable situation that the sense of hope in the film was almost completely overshadowed. I just wanted all the misery to end. I suppose that means this is an effective drama and I am certain that if you watch it, it will affect you in some way. Bleak movies don't bother me all that much, but this one turned into borderline overkill. So I suppose it boils down to how much you're willing to take. If you can deal with that amount of misery, then you'll probably love this one.
Aside from the amount of misery on display, Precious is without a doubt a well made film. Lee Daniels has some style and the visuals added a lot to the film. Precious's dream sequences have an authentic dream-like quality. The camera movement impressed me the most, though. Daniels moves the camera with ease and it makes things a bit easier to watch.
You may have noticed that I haven't even mentioned the performances of this film. That's because I'm a bit late to the game with this one and everything has already been said about all the principal actors. I'll just say that Mo'Nique and Sidibe give extremely authentic performances and I completely believed their characters throughout.
So I'm not very impressed with Precious but I understand the praise it has received. I just like my misery in smaller doses, I guess. This film was too much. It beats the viewer into submission to the point that any semblance of hope is wasted when it's all said and done.

Kurgan laughed a few times, but he never laughed in slow motion.

First off, let me say that I am not a die hard Boondock Saints fan. I thought 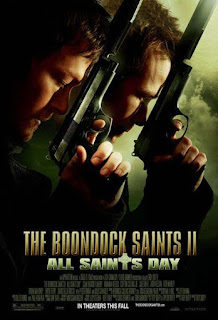 the first film was amusing and all, but I have never understood the obsessed following it gained. The first film was an attempt to be edgy and stylish, but I just thought it was cheap and stupid most of the time. That said, I actually enjoyed this sequel and I imagine if I liked it, then the die hards will love it.
This second outing just seemed funnier and better put together. That doesn't mean this film is perfect or anything. I still found the shootouts to be slow motion bore fests and it doesn't seem like the filmmakers have learned to make proper cuts, since most scenes have an almost jarring transition.
But I could slightly get past that on this one. I don't recall laughing much during the first film (even though it was supposed to be funny at times), but I chuckled multiple times during this one and for the most part they were intentional laughs. The main reason for this is Clifton Collins, Jr. I've enjoyed his work since I first saw him in The Stoned Age years ago. He basically takes over the role of the deceased sidekick from the first film: Rocco. I always thought Rocco was stupid and annoying, but Collins' character, Romeo, is stupid and funny.
Reedus and Flanery do well this second time around as well. Sometimes I didn't find them completely convincing, but for the most part, they made the movie fun. I can't say the same for Julie Benz, who replaced Willem Dafoe's FBI agent. She attempts a southern accent and it is absolutely terrible. I found her every scene to be insufferable.
I suppose most of my problems, like the accent, are due to the over the top antics of Duffy. I'm sure he was completely happy with Benz's accent. He may have wanted it intentionally bad, but just because someone does something poorly on purpose, that does not mean that it is ironic or clever. Sometimes it is what it is: terrible. It's not just the accent and the ridiculous dialogue (like "I'm so smart I make smart people feel like they're retarded"), it's also the over-directed shoot outs. I get it, slow-mo and techno music make shootouts stylized and "cool." But can't he mix it up a bit? No, not only can he not mix it up, he forces you to sit through some shootouts two or three times. I'm not joking. In this film, there is a bar room shootout that Duffy actually did without using slow-mo. But just when I thought he had changed his ways, he shows the shootout again, but this time in slow motion. To top it all off, he shows an alternate version of the shootout a minute later in, you guessed it, slow motion.
Duffy knows his audience, though. I thought the shootouts from the first film were boring, but apparently an entire sub-culture loved them. So Duffy delivers more of the same, which is a problem for me, but probably a positive aspect for the legion of Boondock fans out there.
So the gist of all this is that All Saints Day is a little funnier and amusing than the first film. I don't expect many converts from this film, though. I liked it a little and all, but I still don't consider myself a fan. It's worth a rental, though.
Posted by Eric Harris at 4:56 PM