Shocking that this got a Kurgan, I know... 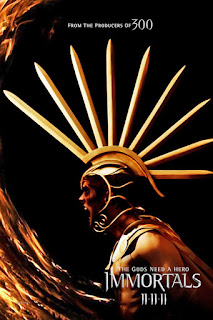 Some may have seen the preview for Immortals and been excited to see the next 300 since the previews boasted that it was from the producer of that stylized, violent Greek action film. Viewers going in for a movie like 300 will likely be pleased by elements of this film, but “Immortals” is trying for something a bit different. Immortals may be produced by someone involved with 300, but, more importantly, it is directed by Tarsem Singh.

Tarsem Singh’s previous two films, 2000’s The Cell and 2006’s The Fall, are known for their interesting visuals, especially the latter film. So the bar is already set for Immortals to at least be a striking film. On top of that, the director has stated that he set out to make a film that looks like Caravaggio paintings. (Don’t feel bad if you need to look up Caravaggio paintings; I certainly had to.) Tarsem Singh has certainly succeeded with Immortals as far as the visuals go. The movie looks great. The design and color of the film makes it one of the more interesting films of the year. If anything, though, the visual style of the film could stand to be stranger. Those who are familiar with Tarsem’s work will see this film as his most normal film by far. Don’t worry, though, there are plenty of out-there visuals in the film.

Of course, a film about Greek mythology is very open to strange visuals. Immortals is loosely based on Greek mythology. I say loosely because the film features plenty of figures from Greek mythology like Theseus, Zeus, Athena, Aries, Hyperion, the Titans, etc. but it doesn’t really stick to any set myth. That is actually a strong point for the film since it can be its own story set to the backdrop of mythology. Theseus (Henry Cavill) is a warrior who lives only to protect his mother. King Hyperion (Mickey Rourke), meanwhile, is on the warpath throughout all of Greece, searching for the Epirus Bow, which will allow him to release the Titans and start an all out war with the Gods. Of course, Theseus gets wrapped up in it and there are plenty of epic battles.

Immortals has a great style to it, but it is still primarily an action film. The action is great and never gets old. By that, I mean that each action sequence is different from the previous one. There are slow motion elements, sped up moments, traditional battles, hand to hand combat, and absolute chaos at times. It all looks great, especially in 3D. It’s rare that a film is actually worth seeing in 3D, but because of the action, Immortals is a film that benefits from the third dimension. This is a gory, brutal film, and the 3D really adds to the brutality of it all. The scenes featuring the Gods in action in 3D are some of the best moments of the year, action-wise.

This is an action film with a point, though. Immortals attempts to say something about belief, destiny, heroism, and duty and while nothing profound or surprising happens in the film, it’s nice when an action film strives to be more than just an excuse to spill blood. What elevate the themes of the film are the performances. Cavill makes an impressive debut as a leading man and fits into the hero role perfectly. Superman fans should breathe a sigh of relief as Cavill should do just fine as the Man of Steel in that series. Rourke is an excellent counterweight as the evil King Hyperion. He mumbles creepily through every scene. He seems to be constantly indifferent and that somehow adds to his menacing character. Stephen Dorff gives a surprisingly fun performance in a supporting role. Freida Pinto holds the fort down as one of the only substantial females in the film (though one could argue that this film is a bit sexist since only men make any difference in the world of the film). John Hurt easily inhabits a grandfatherly role. And Luke Evans is a commanding presence as Zeus. Anytime he shows up in the film, you can’t help but pay attention.

Unfortunately, the Gods are not prevalent in the film. Their few action scenes will likely leave viewers wishing the film had been told from their point of view. But then again, watching the Gods lay waste to mortals for two hours could get tiresome. Either way, their scenes were jaw dropping at times.

Immortals is a nice diversion full of mythology and violence as Hollywood gears up for the awards season. This film would have fit perfectly in the middle of summer, but thankfully it dropped in during November to break up the boredom. Don’t expect a lesson in mythology, though; just sit back and enjoy some beautiful, brutal action.