In Time has an interesting world and premise, it just isn't deep enough. 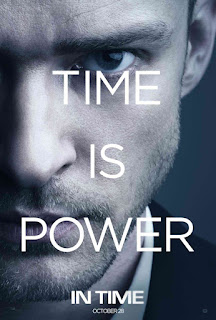 Sci-fi movies usually contain some kind of commentary on present day affairs, and In Time is no different. With the Occupy Wall Street movement going on it is impossible not to notice the similarities between the sci-fi world created in writer/producer/director Andrew Niccol’s film and our own. Commentary aside, “In Time” is a serviceable thriller that proves, if nothing else, that Justin Timberlake can handle a leading role.

In Time takes place in an alternate reality in which humans are genetically engineered to stop aging at 25. Once they turn 25, a clock on their forearm starts counting down from 1 year; once it runs out, they die. So the people work not for money, but for more time. Basically, it’s like our world, but time is literally money. Since time is money that means there are the poor people, living day to day and there are the rich people who are, barring an accident, immortal. The world is divided up into “time zones” which keep the rich separated from the poor.

The concept of In Time is easily comparable to present times as people are protesting the financial sector as they struggle to make ends meet while a small percentage of the population owns the majority of the wealth. This film is an exaggeration of that scenario in that the poor masses are dying because of the rich few. Some timely social commentary is fine in a sci-fi film, but this one stretched imagination. The world of In Time isn’t controlled by the military or anything yet the people just shuffle along like sheep, struggling to earn a few hours each day. It just seems like this world couldn’t sustain itself because the poor should be rebelling. We are talking about a country that once rebelled because of taxation. Are we supposed to believe that this same group of people wouldn’t rebel when their lives were at risk on a daily basis? But this is a sci-fi movie and suspension of disbelief is required for enjoyment, but a good film should have more answers.

Will Salas (Timberlake) is one of the people scraping by, trying to provide for himself and also keep his mother (an underused Olivia Wilde) alive. Things change for Will when a bored immortal decides to die and leaves Will over a century worth of life. This allows Will to mix it up with the rich crowd and he decides to change the world, one minute at a time. Giving time to the poor, however, doesn’t sit well with the bankers and Will is forced to spend his time on the run with Sylvia (Amanda Seyfried), the daughter of one of the richest men in the world.

In Time is essentially a chase film with most of the characters constantly on the run, by foot and car. As far as that goes, the film is mediocre. The chase sequences aren’t that interesting or suspenseful. A couple of the car chases have some flair, but as an action film, there isn’t much here, although Timberlake does get a pretty decent hero moment.

This is a film that strives more on the world of the film. Niccol has made some films that have very defined worlds in Lord of War and Gattaca. The setting of In Time is just as interesting as those worlds; it is not as clearly defined, though. Aside from a bit of opening narration, the how and why of the world is left up to the audience to figure out. That’s fine, as it is nice to let the audience think about something on occasion rather than just be told about it. The problem with In Time is that there isn’t enough info to let the audience figure it out. For example, here are some questions you might have leaving the theatre: So all diseases have been wiped out? What’s the policy concerning pregnancy? Where does the time come from? Who is in charge of the government? Why are electric cars around but people still use pay phones?

In other words, In Time doesn’t hold up to scrutiny. With a high concept sci-fi movie, that’s not a terrible issue for a film to have, but it is an issue nonetheless. The world is still very interesting and is the highlight of the film, but it’s not fully realized. Some of the questions are just too hard to ignore. Take the time keeper (policeman) Raymond (Cillian Murphy). He is much more interesting than Will, but he’s relegated to a slightly villainous role. We never get to know who he answers to, though. The bank owners don’t control him because he threatens to arrest one of them, yet he still has an unseen boss. Plus, he seems like a conflicted man, yet we never see what he does off duty. Just like the setting, you’re left wanting more.

In Time is a harmless enough movie that should entertain. The gimmick of the concept is interesting enough to sustain the running time of the film, even if it is kind of flimsy once you start to think about it. It’s really a shame. In Time is a decent movie that could have been something special if it left the viewer with more answers than questions.

Amanda Seyfried was apparently hired just for her wide-eyed stare. She spends her first dozen scenes just staring lustily at Timberlake. I can understand one, maybe two scenes like that, but this movie goes into overkill with it.

Why even cast Olivia Wilde? It’s not as if she’s an unsubstantial actress these days since she’s had some major roles. Why relegate her to what is essentially a cameo role, especially when 90% of her scenes are shown in the trailer?

Vincent Kartheiser is perfectly cast. I know he’s just doing his “Mad Men” thing here, but it’s exactly what is needed for the role.

The Johnny Galecki subplot was laughable. So Timberlake gives him a decade, fine. Then he looks at the bar after Timberlake leaves. Ha ha, he gets time and the first thing he does is start partying; what a wacky friend! Then we find out later that he went on a bender that killed him? What? I can kind of see why they killed the character off, but why kill him off after his last scene was slightly comedic. And if that last scene he was in wasn’t meant to be comedic, then the filmmakers should’ve gone to greater lengths to show that the guy had a serious problem. If they still needed him dead, just point out the fact that having a decade in that part of town will get you mugged/killed.

Finally, isn’t Weis right about the world when he says they can only mess it up for a generation or two? I think so. Ultimately this is a pointless film because the change they bring is fleeting. Even if they do somehow topple the time system, guess what comes next? A currency system and then they’ll be in the same boat all over again. This film is a borderline Communist fantasy that didn’t attempt to realistically look at what might happen to the world it takes place in. Of course, all of this could have been avoided had they just explained who was in charge of it all. Maybe they were afraid to go the Matrix route and peek behind the curtain. But why create a world if you don’t plan on fully investigating it?