*Been having some computer issues, so this is very late, but here it is, anyway.

High school kids with super powers?  It's a lot better than it sounds. 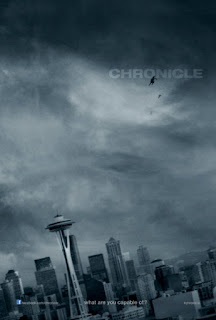 Found footage films like The Blair Witch Project and Cloverfield always interest me.  Sure, the handheld aspect can make them a dizzying experience at times, but it adds a realism that makes the films quite effective.  Traditionally this type of filmmaking has been used for horror films (and it works well), but Chronicle is the first superhero movie to be filmed this way and it turns out this genre is a perfect fit for the style.  It is basically a found footage film about three high school kids who get super powers.  It’s such a straightforward and interesting premise one wonders how it took this long for a film like Chronicle to get made.

As with most found footage films, the first problem the film has to tackle is to explain why a character would be filming their life.  Technology has mainly solved that problem (more on that later) what with all the security cameras installed, cell phone cameras, and a generally self-obsessed culture of video blogs and youtube videos.  You  still need to have a reason for a character to start filming every part of his life, though, and Chronicle comes up with a plausible enough reason.  Andrew (Dane DeHaan), the film’s loner protagonist, is a senior in high school with a mother on her deathbed (literally) and an out of work father who takes out all of his problems on his son, sometimes physically.  Andrew decides to start documenting everything that happens in the house and his inner film director starts to come out so he takes his camera everywhere.
Soon enough, Andrew’s camera captures a very strange occurrence.  When he’s dragged to a rave party in the boonies by his cousin Matt (Alex Russell), Andrew and Matt, along with the most popular kid in the school, Steve (Michael B. Jordan), stumble across a mysterious hole.  Upon investigation, they notice a strange sound reverberating from it and decide to explore it further (why not?).  Anyway, something weird is down there and after making contact with it the three learn that they have telekinetic (among other) powers.  That is certainly a good reason to start recording your every action.
What follows is the origin story of a group of superheroes.  Origin stories are getting kind of boring, though, due to the ridiculous amount of them in recent years.  But we’re not sitting around waiting for Peter Parker to get bitten by a radioactive spider.  Plus, Parker decided to instantly use his powers for good.  There are real high school kids; they want to have some fun.  That’s what makes Chronicle such a good time.  This isn’t a realistic movie, but the way the kids react to their powers certainly is.  They use them to pull Jackass style pranks, impress girls, and excel at beer pong.  It’s flat out funny at times.  But it does get darker and then the action starts.
Chronicle holds up as an action film thanks to the found footage style.  CG can sometimes look goofy in this style (and it certainly does at times in this film), but for the most part it is much more effective when captured on a handheld camera or security footage.  The ambition of the film may stretch too far at times, but for the most part all of the action is believable and exhilarating.  All of the telekinesis elements look great and the flying sequences are amazing.
If Chronicle has a true weak point, it lies in the acting department.  The actors do come off as high school kids most of the time, especially when they get overly excited about things, but during the dramatic moments, they leave something to be desired.  As a light-hearted film, they are fine, but if there is meant to be an emotional connection made to these guys, then they are quite weak.  The film thrives despite this, though.
Overall, Chronicle is a surprisingly good time.  Director Josh Trank handles the found footage genre in a refreshing way, and Max Landis’s screenplay fits into the superhero genre in a satisfying way.  The combination of telekinesis and found footage is melded perfectly as it allows the camera to float anywhere.  Sure, there are questionable moments (and that camera seems to be a little too resilient), but it all comes together quite nicely.  Plus, the found footage element opens up this film to a discussion about how filmed our society is these days.
Chronicle may have been dumped in the early year wasteland of big releases, but don’t let that fool you.  This is an ambitious film that accomplishes an impressive amount of what it sets out to do.  The acting is nearly laughable at times, but there’s much more right with this film than wrong.
Posted by Eric Harris at 9:30 PM