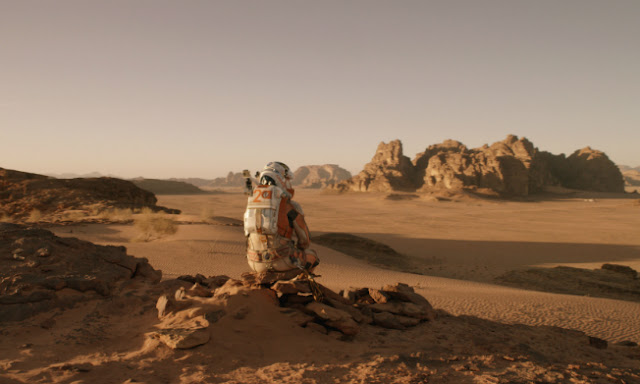 Director Ridley Scott’s recent return to sci-fi, Prometheus, was not very well-received (though I really enjoyed it) partially because it did not live up to the expectations created from Scott’s early sci-fi classic, Alien. Scott returns to science fiction again with The Martian, a film that could be called the anti-Alien.

Comparing The Martian to Alien simply because they are both sci-fi films directed by Scott is not fair. But the opening credits and score invite the comparison. The film begins with ominous music very similar to Alien as the title appears and then fades away one piece of a letter at a time, which is the reverse of the title reveal of Alien. That subtle nod lets the viewer know this is not going to be like Alien.

The difference is important to note because Scott’s filmography is filled with dark, ultra-serious movies. It would be easy for Scott to take the novel The Martian is based on, which is actually quite light-hearted despite the serious situation, and turn it into a much darker film. The intro makes it clear that Scott is venturing into new, nearly opposite territory, meaning The Martian is going to be fun, which is not a word typically associated with Ridley Scott.

The Martian has a setup that should be devoid of fun, however. Astronaut Mark Watney (Matt Damon) is presumed dead while his team aborts a Mars mission to return to Earth. It turns out he is still alive and must figure out how to survive on an inhospitable planet, alone, for four years. That alone sounds more like a depressing survival story than a fun movie, but add to it the logical higher-ups at NASA constantly discussing how impossible it will be for him to survive, and it sounds downright miserable. This is why tone is so important in writing and filmmaking. The source material (written by Andy Weir) deserves the most credit, as it is filled with sarcastic humor. Screenwriter Drew Goddard retained that comedy, and Ridley Scott finalized it with a bit of help from a great cast, many of whom are known for comedy. So instead of a depressing slog of a movie, we get a fast-paced space movie in which a funny astronaut solves every problem thrown his way.

The casting of Mark Watney is critical, and Matt Damon is the perfect choice. Watney needs to be someone you want to see saved, and Damon is very likable (despite his recent brushes with controversy in interviews and on Project Greenlight). He is also capable of carrying a film by himself for long stretches of time. Part of this is thanks to the fact that Watney is constantly talking to the NASA cameras tracking everything, which allows Watney’s portions of the film to be more dialogue-heavy than you would think. The other part of that is Damon’s abilities as an actor. This performance might get dismissed later in the year since the film is light-hearted at times, but he is truly impressive with seemingly no effort. But when you consider that he has make you laugh, cry, and care about him in general, all while talking to himself and reacting to typed messages, it becomes much clearer how great a performance this is. The rest of the cast is great and impressive, but this is definitely Matt Damon’s movie.

Performance and tone aside, any film that takes place on Mars needs to look great to work. This is where Ridley Scott truly shines. Say what you will about his less popular films, but Scott’s movies always look amazing. The sets look so intricate and realistic it’s easy to buy into this near-future of manned Mars missions. And Mars, created with a combination of a practical location (the Wadi Rum in Jordan) and CG, looks beautiful.

All of these elements combine to make The Martian the most exhilarating movie about space exploration in years. In fact, it almost felt like a promotional movie to get people interested in manned Mars missions (and with NASA’s obvious cooperation, I think it’s safe to say they see it that way too). But that doesn’t take away from the film at all. It’s refreshing to see a movie set in a world where space exploration is done for exploration’s sake rather than as a quest to save the world or escape a dead world or (insert depressing plotline here).

This is not to say The Martian is just some fun, empty, forgetful experience. Ridley Scott cannot make a film without plenty of thematic elements. The most dominant theme concerns how important a single human life is. The movie spells it out in no uncertain terms that every life is worth saving, and saving one person on a distant planet can unite everyone on this planet. Is this true? No. Of course not. If this were to happen in the real world, there would be an entire subsection of the population that would doubt that there was actually a mission sent to Mars at all. But The Martian is not the real world, which is why it’s a great, fun film. Alien is still the better film, but it’s hard to compete with the feeling you will have after watching The Martian.

The Martian receives a:

Hats off to Matt Damon and Jessica Chastain not being too afraid of doing similar projects to accept this role. Chastain's role isn't all that similar to Interstellar, but Damon's is. In fact, Interstellar works as an alternate ending. A kind of "This is what could have happened" warning.

I loved that they kept the Elrond joke, especially since Sean Bean (Boromir) was in the scene. Speaking of Sean Bean, good for him for not dying in this one.

I'm getting pretty sick of seeing China pandered to in movies, but at least in this one, it was part of the book, and it makes much more sense as they do have a space program. In other movies (like Transformers: Revenge of the Returned Fallen or Whatever) the characters almost randomly end up in China. And the China stuff paid off in this film as we see a Chinese astronaut on the next Ares mission during the credits sequence.

Didn't see this one in 3D, but I can imagine some of it might have looked great. Visually speaking, it was plenty impressive in 2D.

Finally, the ending is nearly sappy with optimism, but I still liked it. There was a time that maybe the "good" ending would have bothered me, but not anymore. I love darker sci-fi films like Alien, Blade Runner, Interstellar, etc. but sci-fi movies that honestly make me feel good for humanity at the end are so rare that I was okay with it. Plus, I truly wanted Watney to make it, and the tone of the film does not allow for a down ending.