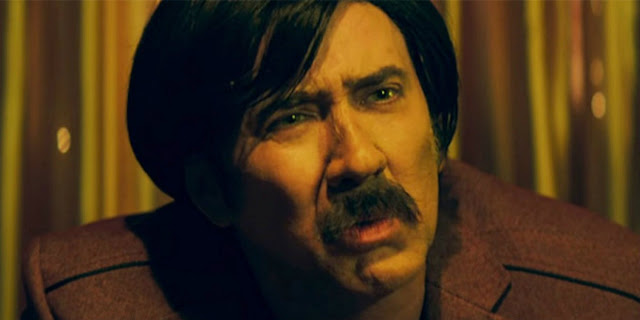 *Actually, all you'll find are small clips and trailers. He is the best part of this movie, but his scenes don't come close to the insanity of Deadfall.

I don't actually own Arsenal, thankfully, but when I was able to get a screener link to this odd film that features Nicolas Cage reprising a dead character from Deadfall, I had to check it out. Unfortunately, Cage's character is the only similarity to Deadfall. To be fair, Deadfall is terrible, but Cage makes it worth watching with his unhinged "my brother told to do whatever I want" performance. It appears that he was not given as much freedom for Arsenal.

Arsenal stars Adrian Grenier as an owner of a construction business who will do whatever it takes to help out his troubled brother (Johnathon Schaech). When his brother ends up kidnapped by the wannabe gangster (Cage) he used to work for, Grenier goes on a mission to save him. It's not a terrible plot, but it is pretty bland. It's the kind of plot that could be saved by an eccentric performance or a unique style. As far as style goes, the film is very basic aside from oddly gruesome slow motion violence here and there. No one is watching this for action, though; we want that eccentric Cage performance.

Cage does get to go a bit crazy here, mainly in two violent scenes. You need to have seen Deadfall to appreciate the performance, however. Honestly, fans of Deadfall are probably the only people who will get even a small bit of enjoyment out of this film. I consider myself a fan of Deadfall, but I came away disappointed. (Warning: SPOILERS for Arsenal and Deadfall from here on out.)

When I found out Cage was reprising his role of Eddie from Deadfall, I had high hopes. In Deadfall, he is pushed face first into a deep fryer, and his body is disposed of. I hoped Arsenal would posit that he was actually still alive and was now hiding out in a small town. That's not the case. He's simply the same character. That's it. Deadfall didn't happen.

This makes very little sense because the film goes out of its way to remind you of Eddie in Deadfall: he speaks straight up gibberish early on; when he kills his brother it's with a slow motion punch that really looks like a karate chop ("Hi-fucking-yah!") until the last second; he mumbles most of his dialogue; he uses eyedrops randomly in what's supposed to be an important scene. Why recreate all of that only to have him play second fiddle in this weak story about brotherhood? This film could have been so funny and unique if they had made it a quasi-sequel to Deadfall.

Then there's the oddest Deadfall connection: the writer-director of that film, Christopher Coppola, plays Eddie's brother (Coppola is Cage's real life brother, too). Eddie kills his brother early on in a fit of rage. This leads me to my only theory for the Deadfall connection. Cage agreed to do this film, but would only do it if he could reprise his role as Eddie and kill his brother onscreen. This is his onscreen payback for his brother's crappy film. I don't think Cage is actually ashamed of Deadfall, but he is aware of his insane performances (he claims The Wicker Man was intentionally funny). He and his brother probably thought it would be a funny in-joke to have Eddie kill Coppola. That's probably not the case, but thinking of why Eddie is in this film brought me my only enjoyment from watching it.

Oh, and John Cusack is in this film. I have no idea why.
Posted by Eric Harris at 2:43 PM