The Kurgan likes a good creature movie, especially one that goes as far as this one did.


It’s not too often when a movie literally 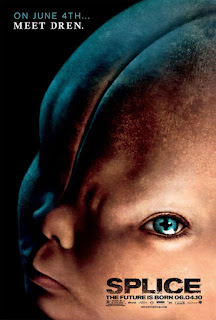 makes my jaw drop. Splice did, which may or may not be a good thing, but it’s certainly a reaction. When you watch as many movies as I do, it gets harder and harder to be shocked by a film. For that reason alone, I think this film deserves some notice. It’s the atmosphere and story that make it a completely entertaining and disturbing film.
Of course, I’m not going to write what I found so shocking about the film. If you want to know: go watch it. Just know that it wasn’t a gory or violent scene that did it. I just couldn’t believe what a character was doing. I think you’ll know what I’m talking about if you watch it. Though you better hurry; I doubt it’ll be in theatres much longer because of the disappointing box office it’s done.
Splice is about a couple of scientists, Clive and Elsa (Adrien Brody and Sarah Polley), who have created a new organism by “splicing” DNA together from multiple animals. What they made is a slug type creature that can potentially produce a protein for new medicine. This is kind of weird (and the slug creatures are definitely gross), but it is not enough for Clive and Elsa. They want to throw some human DNA into the mix for more important results. They’re forbidden to do it, but they do anyway and that’s where the creature from the poster comes into play.
The creature, Dren, has just enough human features to make it very creepy. But Dren is not a monster. This may disappoint a few people. The previews make this film look like a borderline slasher-film with Dren hanging from the ceiling and killing everything in sight. I can’t stress enough that this is not the case. There is violence, to be sure, but it’s not rampant.
Splice is mainly about how Clive and Elsa have to deal with raising Dren. They have to stash Dren away and look after her/it since they’ve created her illegally. I saw the film as a sci-fi family drama. Elsa has some maternal issues (she shies away from pregnancy conversations), yet she instantly seems protective of Dren. Clive, on the other hand, wants children, but doesn’t seem too hot about the idea of raising an experiment.
This is where you can start to question the film. You may wonder what kind of scientists could be so reckless and borderline stupid while also being brilliant. If you have questions like that, I have a name for you: Dr. Frankenstein. (Clive and Elsa are parts of the actors’ names from Bride of Frankenstein.) “Splice” is the classic tale of science run amok. That may make it a bit unoriginal plot-wise, but the questions it raises for the characters make it fresh. For instance, I found the dynamic of Elsa trying out motherhood to be just as interesting as the creature itself.
The creature will most likely be the most important aspect for many people, though. I wrote above that Dren is not a monster and I stand by that. This doesn’t mean that Dren is cute and cuddly, however. In general, Dren gets creepier with age. The thing is, she looks more and more human as she ages. The added resemblance to a regular human actually showcases the differences in Dren and make her that much more disturbing. The tail, strange hind legs, and four-fingered hand are definitely out there, but Dren’s eyes are what haunted me throughout the film. It may be a different aspect for each viewer, but I think the majority will be at least a little creeped out by the design of Dren.
The creature design sets up the overall atmosphere of Splice. This film isn’t necessarily the most visually striking film around, but there are subtle elements that add to the tension of the film. I’m a fan of the extremely slow zoom and a well placed overhead shot and this film has both. Plus, the production design of the lab and the farmhouse created a nice sense of foreboding.
In a film that showcases a creature, the actors sometime take a backseat. That’s not necessarily true, here. Brody and Polley don’t carry the film or anything, but they do a fine job and they are very convincing throughout.
The dilemma for the main characters is the most interesting aspect of the film. You see them question themselves and each other and it is all very compelling. Is Dren a part of their family or just an experiment? What is the motivation behind the experiment? Is Dren an abomination against nature? And so on and so on. Those issues kept me interested throughout the entire running time. Others may be bored by the lack of horror-type action.
Splice may not have enough creature elements for some, but it does feature some humor, which 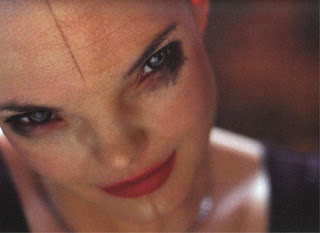 is arguably intentional. Whenever a movie features an absolute splash of blood that hits a group of people, I find it funny. I may be strange, but I laughed multiple times during the film while I also took the film quite seriously. With some of the situations these characters end up in, you almost have to laugh, even if it’s just because you’re unsure of what your response should be. On an almost side note, there is one element that I think was intentionally comedic and a statement on a filmmaking trope. Near the beginning of the film, a montage begins in which Clive and Elsa try to splice the new creature. Borderline generic techno music blasts during the scene until Clive comments that the “industrial” music is hampering his thought process and he turns it off. I love it when a song seemingly begins as non-diegetic, only to have a character acknowledge the music and turn it off or change it. This slightly breaks the fourth wall and may take people out of the movie a bit, but I always enjoy stuff like that. This example is proof that director Vincenzo Natali was not out to make a completely serious film.
I definitely recommend Splice, but I have to reiterate that it features some disturbing elements; disturbing on a character level, rather than a gross-out level…well, maybe a little on the gross-out side. I think it’s the mentally disturbing elements that will stick with you the longest, though.
Posted by Eric Harris at 10:57 AM