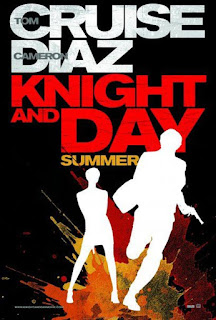 days, he gets all the focus. There’s a reason for that: the guy is entertaining. People have calmed down about his religion and personal life lately, but every film is still treated as if it’s part of some comeback or something. In fact, it seems like people just cannot get past the idea of Tom Cruise; they don’t see a character on the screen, they see a movie star. That’s a problem because you can’t really enjoy a movie if you don’t buy into the world the film creates. With that, I can give a one sentence review if you’d like to stop reading after this paragraph (please keep reading, though): if you like Tom Cruise, you’ll like Knight and Day.
Knight and Day is a very fun action-comedy that revels in Tom Cruise’s crazier side. Cruise plays Roy Miller, a superspy gone rogue with a powerful item, who seemingly bumps into June Havens (Cameron Diaz) at the airport, setting off an action-packed chain of events. The setup, spy/professional killer teamed up with unbeknownst/unwilling female counterpart, is not all that original. In fact, it doesn’t seem all that different from a film still in theatres: Killers. (I can’t compare the two films, though, because I did not see Killers.)
This film has something going for it that makes it stand out, however. That something is Tom Cruise. He plays the part the same way he played characters in the late 80s and early 90s. He’s playful, a little crazy, and completely confident in his every action. The craziness was the most important part for me because it really created the comedy of the film. I can’t help but laugh when Cruise, who has pulled a gun in a diner, kicks a waiter to the ground, only to inform the restaurant’s patrons that he only did it because he “thought [the waiter] was making a move.” It’s hilarious to me that he would feel the need to explain himself and then say it so casually. That’s the true comedy of the film: Tom Cruise saying ridiculous things in a matter-of-fact tone. The confidence Cruise exudes in character translates through the screen and it made me completely believe that Roy Miller could actually survive all of the ridiculous situations he becomes a part of.
Those ridiculous situations, such as taking out bad guys as he hangs on to the hood of a speeding car, keep the film constantly entertaining. The movie doesn’t start off with a bang or anything, though. In fact, if you didn’t know any better, the first fifteen minutes of the movie would probably have you convinced that you were watching a romantic comedy. But when the action starts, it sets the movie off on a breakneck pace that rarely slows down, and that’s a good thing.
A movie like Knight and Day needs to keep things moving because it won’t do to have the audience thinking very hard about the film. Not that the story isn’t compelling, it’s just that the film has a light hearted tone when it comes to violent action. People are being killed throughout the film, but it’s never taken very seriously. If the film slows down and we have to look at the dead bodies, then the tone gets much darker.
The film needs to keep things moving so you don’t analyze the action scenes, as well. Knight and Day features some extremely over the top action. I was fine with the majority of it (a scene featuring bulls was a bit too much) and it was constantly entertaining. But if the action was glorified with slow motion or taken too seriously then I would have been scoffing at the screen the whole time. The point is, don’t go into the film expecting any kind of reality.
The action isn’t treated as high art or anything, but director James Mangold does a fine job with it. These days, it’s very important for an action director to film action scenes in which you can tell what’s going on. Sometimes things can get too shaky and the cuts can come so quickly that you can’t tell what’s going on. That is not the case with Knight and Day. The action scenes were very clear and usually quite inventive. I particularly liked how Mangold handled a few hazy sequences that a character sleeps through. The first person point of view aspect of those scenes led to some very funny visual jokes as the character wakes from one crazy situation to another.
Which brings me back to the comedy of the film. I can’t stress enough that this film tries and succeeds at being funny. Most of it is thanks to Cruise, but Cameron Diaz holds her own as well. Her freak-outs are quite funny throughout the film.
The only downside to Knight and Day is the misuse of a strong supporting cast. Peter Sarsgaard is utterly wasted as a rival agent. The character is completely bland. I like that Sarsgaard is getting some higher profile roles, but I want to see him play a character with a pulse. Paul Dano is also wasted on a one-note character. And Viola Davis and Jordi Mollá are fine actors, but have little to do here.
I can forgive Knight and Day for misusing a few good actors, though, because the film stands up just fine with Cruise and Diaz. Maybe Tom Cruise is actually just playing “Tom Cruise,” but as long as it is fun to watch, who cares?
Posted by Eric Harris at 12:32 AM