Nostalgia, explosions, and heart all in a summer movie? Hear, hear!

Do you ever catch an old Spielberg movie on TV like E.T., Close 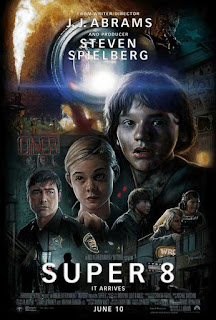 Encounters of the Third Kind, or Jaws and find yourself saying, “They don’t make ‘em like that anymore”? Well, Super 8 is proof that they do. The J.J. Abrams-directed, Spielberg-produced sci-fi film is filled with nostalgia, child-like wonder, and…lens flares (more on those later). Super 8 is a throwback not only in the sense that it takes place in the past (1979 to be specific), but also in that it represents a true family film.

A real family film is a rare thing these days. Most parents just settle for whatever animated Pixar film their kids want to see to fill the family film void. To be fair, Pixar has cornered the market on children’s movies that also appeal to adults but they are still first and foremost films meant for children. Super 8 is the film that a parent can take their teen-aged and near teen-aged kids to see. That is the age group that this film caters to because the principal cast is that age. Kids may come out of this one with the same sense of awe that their parents had after seeing E.T. for the first time. Adults will leave with a nice sense of nostalgia for their own childhood.

Nostalgia doesn’t really describe what this film is about, but don’t expect much in the way of synopsis in this review. Super 8 has gained attention for its mysteriousness and I certainly don’t want to spoil any of the mystery. Personally, I didn’t find the plot to be so amazing and out there that it needed to be so protected, but a film is always better if you don’t know everything about it before you go in. The basic plot, from the previews, involves a group of kids who witness a train wreck while filming an amateur movie. The train was carrying some top secret cargo that the military is keen to protect. That’s all you’re getting from this review on the plot. This is a movie, after all, which ended its main preview with the line, “What the hell?”

Now back to that whole childhood nostalgia issue. Since this film takes place in 1979 the kids in this film are very different from today’s generation. No smart phones, iPods, or internet. This is not just a device to add humor to the film, though that is used to good effect at times. (The time period also allows for a fantastic soundtrack, by the way.) This was a time when parents couldn’t keep tabs on their child’s every movement. In fact, things have changed so much that the parents may appear to be extremely negligent in this film because of how little they know about their kids’ whereabouts. That’s an argument for others; the point is that children of yesteryear were able to go off on their own adventures. Super 8 presents a small-town America that just doesn’t exist anymore and that might sadden some, but it will probably just leave the older audience members with a pleasant feeling about how simple life could be years ago.

All feelings about the past aside, Super 8 is also a very entertaining film. This is still a summer movie, after all. There isn’t nonstop action or anything in the film, but when things do happen, they look pretty great. Overall, it’s simply a very interesting film that is filled with humor and heart. Much of that is due to the writing, but the cast is vital. On the younger side, Joel Courtney (Joe), Riley Griffiths (Charles), and Elle Fanning (Alice) stand out and provide the emotional core of the film. They are never annoying and they felt like a natural fit for the film. On the adult side, Kyle Chandler (Jackson) and Ron Eldard (Louis), give strong performances as the troubled fathers of two of the leads.

The father-son/father-daughter relationships in the film are what give Super 8 a resonating effect. By the end of the film, you feel something for these characters and their relationships. The film provides that emotional punch that is so rare in summer movies. We sometimes forget amid all the explosions and superheroes that a summer film can also contain realistic characters that can evoke an emotional response from the viewer.

The emotional response is something that was always found in Spielberg’s early sci-fi films and while Spielberg is all over this film (even down to the Amblin logo at the beginning), this is still Abrams’ film. In a phrase: lens flares. Those who have seen Abrams’ first two films (Mission Impossible 3 and Star Trek) know that the director likes to shine light into the camera to the point that it causes a lens flare to appear onscreen. It almost draws attention to itself at times, but the flares give the film a look and colorful lens flares make sense for a sci-fi film.

There are many more things to get into with Super 8 but that would be getting into dorky gushing over the movie. Obviously, this reviewer loved it. This is a movie that is nearly for everyone. When you check it out, and I hope that you do, bring the family because they don’t make ‘em like this very often.
Random Thoughts (SPOILERS)
Absolutely loved this movie, obviously, but if there was one problem I had with it it was the fact that the scientist who derails the train actually survives the crash. I understand he had to so he could give the kids a few hints or whatever, but no way someone survives that. Couldn't they have just found the body and the map? Wouldn't that have been enough?
I was definitely catching a Cloverfield vibe from the monster design. Almost like this is a prequel to that film and the alien comes back when it grows up or something.
Not going to list all of the easter eggs I spotted (especially since /Film has already handled it so well), but just know that the attentive viewer/Abrams-obsessive fan will get plenty of little treats.
I loved the amateur zombie movie scenes. As a zombie-movie dork I loved every little moment shown in the film from the make-up to the nail in the back of the head zombie kill to the Romero reference.
1979 was such a great time period for this movie. I loved that the kids had to wait three days to get their film developed and that was considered "rush." And the reference to the first Walkman and the sheriff's fear of kid's running around with headphones stuck in their ears was amusing.
After X-Men: First Class and this film, it is quickly becoming an art of how to most effectively use your one f-bomb in a PG-13 movie.
Posted by Eric Harris at 2:58 PM