Must...fight...urge to make a pun...ugh...Bad Teacher passes! No! Curse my cheesy sense of humor.

Comedies are always subjective and one can’t judge the quality 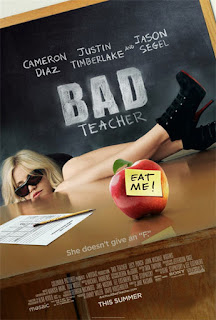 of a film based on their sense of humor. That alone makes Bad Teacher a difficult movie to rate objectively. What makes it doubly difficult is the fact that the film is about a middle school English teacher. That’s not odd in itself but since I am a middle school English teacher first and a movie critic second that puts me in an odd category for this film. I’ll do my best to judge Bad Teacher on its own merits as a comedy but I can’t ignore my own perception of the film through the eyes of a teacher. I usually try to keep myself out of the reviews as much as possible, but I can’t help it on this one.

As written above, Bad Teacher is about a middle school English teacher who is definitely a bad teacher. Cameron Diaz stars as Ms. Halsey, a woman who is skating by in the education world hoping to latch onto a rich man so she can quit her job. That rich man is represented by Justin Timberlake who is subbing at the school simply because he wants to work with kids. Ms. Halsey believes that if she can raise enough money for breast implants then she can catch Timberlake’s eye. Also vying for Timberlake is Ms. Squirrel (Lucy Punch), a dedicated but annoying co-worker. And Jason Segel is thrown into the mix as a gym teacher who has the hots for Ms. Halsey.

The plot description of Bad Teacher might sound a bit convoluted. That’s because it is. The film isn’t exactly focused and some characters seem to get forgotten every now and then. It’s not a major setback for the film, but a bit of tightening up in the editing room would have benefited the film. It seemed at times that Segel’s character had been added in halfway through filming or something as he’s so sporadically placed in the first half of the film.

It’s unfortunate that Segel isn’t in more scenes because he is the funniest actor in this film. He’s not doing anything new in Bad Teacher but his sarcastic observations provided the most memorable laughs. Timberlake is fine in the film, but his character is more annoying than funny so the film would have been better off focusing more on Segel.

Cameron Diaz does a fine job in the film as well. She gets to play one of the worst teachers in cinematic history and she is quite good at it. The indifference and outright disdain for some of her students is hilarious. Her bad teacher moments live up to the film’s title. She smokes pot on school property, starts the school year off by showing movies that have nothing to do with the curriculum, and even drinks alcohol during class. When you think about the possibility of a teacher actually doing these things it can be kind of horrifying, but if you allow yourself to be taken in by the comedy it is all quite ridiculous and funny.

This is where the personal aspect comes into play. Teaching, like any job, has its good days and its bad days. Any teacher knows the feeling of wanting to phone it in once in a while and most of us manage to fight through those funks and focus on the good days and keep on fighting the good fight. Diaz’s character never even makes an effort and while as a teacher I find her behavior reckless and harmful to the students, it’s also amusing to see someone make an effort to be the worst possible teacher he/she can be. And I can’t deny that watching a teacher say whatever she wants to students with reckless abandon is a bit of wish fulfillment.

Bad Teacher has a few faults that might not be noticeable to non-teachers, though. For instance, Diaz appears to only teach one group of kids, even though she claims she has four periods of classes. And her room is a bit too bare bones even by public education standards. I mean, she doesn’t even have a computer at her desk. Plus, the fact that she shows movies every single day for weeks and faces no repercussions is a bit too ridiculous, especially when some of the films she is showing her seventh graders are R-rated. At some point, at the very least, a parent would have heard about what was going on and complained to the school. But a suspension of disbelief is usually necessary for comedies and this film is no different.

Bad Teacher has its negative qualities but it should prove to be funny enough for most people. A few moments try too hard and feel forced into the movie as fodder for the previews (like the Lebron James/Michael Jordan argument Segel has with a student) but for the most part the film earns its laughs. A teacher might find more to laugh at than others, but there are enough general laughs to make this an acceptable summer comedy.

Random Thoughts (SPOILERS)
Justin Timberlake's character was kind of unnecessary in the film. Maybe not completely unnecessary, but he certainly didn't need all that screentime. It seems like the character was inserted into more scenes just because Timberlake was cast.

You have to admire a movie with the audacity to put both the words bad and teacher in the title. That double whammy is opening up the floodgates for pun review titles. Seriously, scan the internet for Bad Teacher reviews and see how many claim that it "gets an F" or barely "passes" or "Bad Teacher is just plain bad." I couldn't fight the urge myself in my rating comment, but at least I did it sarcastically...

It's a bit messed up that the actual good teacher is the villain and we’re supposed to root for an incredibly selfish person who doesn’t really seem to learn much of anything by the end of the movie. In a non-comedy this would be a major setback or it might be bold if it was done on purpose. But I don't think it was intentional in this film. This film makes the statement that no matter how dedicated you are as a teacher, if you are annoying and a bit cheesy, then you are evil and deserve to be bested by the selfish drug-abusing teacher.

I found it pretty funny that Diaz refers to becoming a teacher as "messing up so bad in life." Segel gets a great line when he asks, "So how did you mess up so bad in life that you ended up educating children?"
Posted by Eric Harris at 3:29 PM