Another pun-worthy title. Not even going to put up a fight: Horrible Bosses deserves the corner office and a promotion! I'm going to go throw up now...

Since The Hangover R-rated comedies have been all the rage 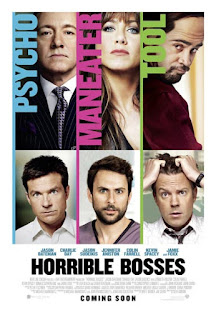 and there have been a number of hilarious movies recently and, thankfully, Horrible Bosses can be counted among them. It’s not as funny as Bridesmaids (my favorite comedy of the year so far), but it is still very funny and worth a watch.

Horrible Bosses is a high concept comedy about three guys (Jason Bateman, Jason Sudeikis, and Charlie Day) and their plan to kill their hated bosses (Kevin Spacey, Colin Farrell, and Jennifer Aniston). There are two ways for this movie to go with a plot like that. The film could be a bleak, dark comedy about murder. Or it could be an unrealistic, goofy romp. Luckily for the viewers, this movie is the latter. Horrible Bosses ends up becoming almost too ridiculous at times, but it has to be if you want the maximum amount of laughs. You really need to suspend disbelief with this one because it gets kind of stupid near the end, but it’s all good fun so it’s not that big of a deal.

The title of the film is kind of misleading in that this is not a movie about the bosses at all. The three leads make the film. Bateman, Sudeikis, and Day work great together and you can actually buy them as individual characters who seem to be real friends. With three main characters and three bosses to showcase there isn’t a lot of time to devote to individual characters but each character comes off as more than one note. Make no mistake, though, this is no character study, but the guys don’t seem like cartoon characters.

The bosses are pretty funny, too, but they aren’t featured as much as you would expect. Kevin Spacey is doing his thing as Bateman’s snarky boss. He’s great, but it’s not a stretch for him or anything. He does provide a few laughs, though. Jennifer Aniston is the weakest of the three, mainly because her laughs are derived from the shock value of Jennifer Aniston sexually harassing someone. Colin Farrell, as Sudeikis’ coke-snorting loser boss, is by far the stand out. It is very unfortunate that he didn’t get more screen time. But the moments he’s onscreen are hilarious. Farrell has been turning in some real quality work the last few years and his streak is still going strong with this one.

If all of the above names don’t have you interested, there is a very strong supporting cast as well. Jamie Foxx has a few amusing scenes as the murder consultant for the group. His name alone (which is very NSFW, by the way) spawns a funny scene that feels like improv, and that’s a compliment. Wendell Pierce (“The Wire” and “Treme”) was a nice addition as a detective. And there are a few cameos that should provide laughs. In other words, the cast of Horrible Bosses is surprisingly classy and varied.

The laughs are consistent and, more importantly, there are a variety of them. You have the funny, uncouth conversations between the main guys. There’s some drug humor thrown in there with a great cocaine scene. Some physical humor always helps as well. Basically, Horrible Bosses doesn’t rely on one single type of comedy to get you to laugh. It’s not exactly a kitchen sink approach, though, because all of the attempts are honestly funny. Variety is the spice of life and that certainly applies to comedies as well.

Horrible Bosses isn’t a classic comedy or anything, though. It does miss here and there. And it does get flat out stupid in the end. The ending of the movie seems very hastily put together. There are plenty of laughs before the movie nearly derails in the end, but some may get tired of it. Plus, this film won’t be remembered as some comedy classic of the decade. It’s funny and it’s worth the price of a ticket, but not many people are going to recommend it years from now. There’s nothing wrong with that, but if you hold your comedies to a higher standard you might not like this one very much.

Horrible Bosses is a very good summer comedy that should keep things funny in the midst of all the big blockbusters. Will you quote it years from now? No way. But it should have you laughing right now and that’s enough. Comedy can’t always be art or even lasting, but if it makes you laugh for your money, then that makes it worth it.

Random Thoughts (SPOILERS)
All I have to add on this one concerns all of the cameos. First off, Bob Newhart
popping up at the end was kind of odd since the man isn't exactly a relevant face in comedy these days. I imagine younger viewers won't even recognize him.

Speaking of relevant faces, it was strange to see Donald Sutherland in a single early scene. I think he's great, but along with the Newhart appearance, they make for a couple weird cameos in a movie otherwise filled with contemporary comedy stars.

Not sure if an appearance from Ioan Gruffudd constitutes as a cameo, but I thought he was funny in his scene about "wet work."

And finally, Ron White pops up as Wendell Pierce's partner. Haven't seen him in anything besides stand-up specials so it was cool to see him in there.
Posted by Eric Harris at 6:08 PM