The Godfather - "It Insists Upon Itself."

If you pay attention to movie news at all, then you know that Francis Ford Coppola, the guy who can’t stop revisiting his movies but doesn’t take shit for it like George Lucas does, is releasing a new cut of The Godfather: Part III now titled The Godfather Coda: The Death of Michael Corleone. I plan on watching it and writing an article, but I wanted to revisit the entire series first. I love these movies (I even like the theatrical cut of Part III), and I honestly don’t have some unique take on the first one. So I’ll keep this simple and just focus on what I love about it and have a little fun with a Family Guy joke about the film. 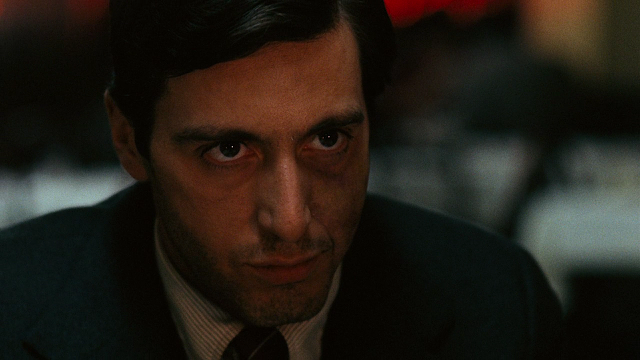 The Godfather came out before I was born, so by the time I got around to it, it was already considered a classic. The whole series always loomed large in the video store when I was a kid: all three movies were double VHSes! Once I started getting into mob movies, I knew I had to check it out.

At first, I liked it, but I think I liked it because I knew I was supposed to, it being almost unanimously considered one of the greatest films of all time. I sincerely enjoyed it, but a lot of it went over my head. I’ve watched it at least a dozen times over the years, and I find new reasons to love it each time. I’ll skip all the classic reasons (the cast, the music, the famous moments, etc.) and focus on what hit me this time: the pacing and atmosphere.

The Godfather is a dark film, both literally and figuratively. It’s legitimately hard to see what’s going on in a lot of scenes, but that plays into the dark mood of the film. These are men who work in the shadows of society, why should they be well-lit? The opening scene seems to take place in a dungeon, not in the middle of the day in a home office in which business is regularly conducted. When Michael finds his father alone at the hospital, everything is dark, signifying the danger of the situation. And it gets even darker when Michael and the florist have to pretend to be tough guys to protect Vito; who knows who is out in that darkness?

All of this sets up Michael’s descent into the dark underworld of his family, but it also feels realistic. Too often city streets are lit up beyond belief. Sure, Times Square will always be a bright spot, but even the biggest cities have their dark streets where dangerous things can happen.

The darkness is realistic, but the pacing is even more so. Movies in the ‘70s were slow and subtle, and Coppola was a big part of making that the norm. The Godfather is still a very straightforward movie, and it has plenty of traditional gangster movie moments, especially in the violence department. But rather than showing someone get killed every other scene, there are lengthy discussions and arguments about every move. This is mainly to accentuate the difference in the leadership styles of Michael (slow and methodical) and Sonny (quick and loud), but it also sets the standard for a great gangster movie with something to say.

“It Insists Upon Itself.”

When I think about The Godfather critically, I always remember the Family Guy clip in which Peter admits to not liking the film, and says “It insists upon itself,” as his main argument. Over the years, I’ve tried more and more to understand differing opinions on everything, especially movies, and that applies to Peter Griffin, too. I know it’s just a joke from a silly show, but is he right?

Well, no, in my opinion, of course. But I can see where he’s coming from. The Godfather may have a few moments of levity here and there, but overall it treats its subject matter with intense seriousness. As well it should, but because of this, people like Peter Griffin, who can’t get into the movie, can easily cast judgment on the film for its serious tone.

I can’t argue with Peter not being able to “get into it,” but I can defend the seriousness of the film. All gangster movies deal with life and death, The Godfather more than most. But it’s the life the film deals with that earns the seriousness. Death is expected in this world, but The Godfather insists upon itself because it is dealing with the soul of Michael Corleone. Over the course of the film, he goes from war hero who wants to stay out of the family business to running the criminal empire and having multiple killed. His descent intensely solidified by cross-cutting the death scenes with the baptism scene with him renouncing Satan, even as he plans to have the father of his Godson killed soon after the baptism.

If such a descent from good to evil doesn’t deserve to insist upon itself a bit, then what does? So fine, Peter, you couldn’t get into it and would rather watch The Money Pit (a movie that definitely does not insist upon itself), but that doesn’t mean The Godfather isn’t allowed to take itself too seriously at times.

The entire saga is a must-own for any fan of mob movies. I’ve owned this movie in every format it’s been released in since the double VHS, and I’m sure I’ll end up buying it again once hi-def reaches its limits. 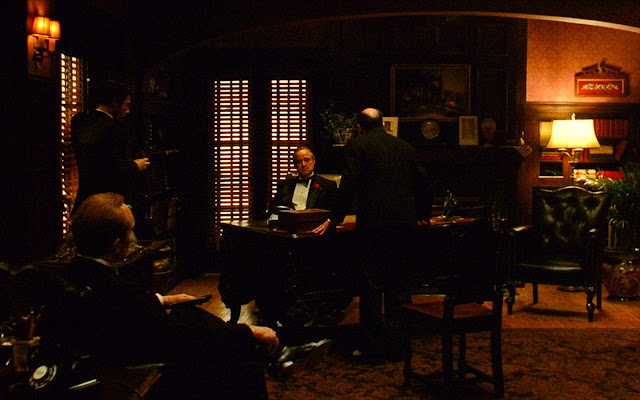 *Just assume all the famous quotes (“Leave the gun. Take the cannoli,” for example) are also my favorites. It just feels silly to type up all the quotes that have become part of the culture at this point. Instead, I’ll focus on more random quotes that amuse me.

The parking situation at the wedding gives me anxiety. Imagine being the car at the very front but needing to leave first. You'd have to ask a dozen people to back out first.

Easily one of my favorite moments is Don Corleone making fun of Johnny crying and Tom laughing about it.

"Let me tell you something, my kraut-mick friend…"

The lack of squibs when Vito gets shot always bothered me. Sure, there are squibs and blood in the close up, but in the overhead shot there's nothing. Maybe they were saving all the good squibs for Sonny's death.

Did Sonny really need to write "8:30" on the cabinet? Is that time too complex to just remember?

Michael has the slowest healing black eye in the history of black eyes. Either that, or all the shit in Italy takes place the first week he's there.

Upon some research, it's because McCluskey really fucked up Michael's face with that punch, breaking his jaw and eye socket. Apparently, McCluskey's full name is One Devastating Sucker Punch Iron Fist McCluskey.

That missed punch Sonny throws at Carlo is only slightly better than the horrific punch at the end of Rocky V.

Fredo does make a comment about the doctor doing great work on Michael's face when they see each other in Vegas.

No one says "Scram!" better than Fredo.