The Fellowship of the Two Prequel Trilogies 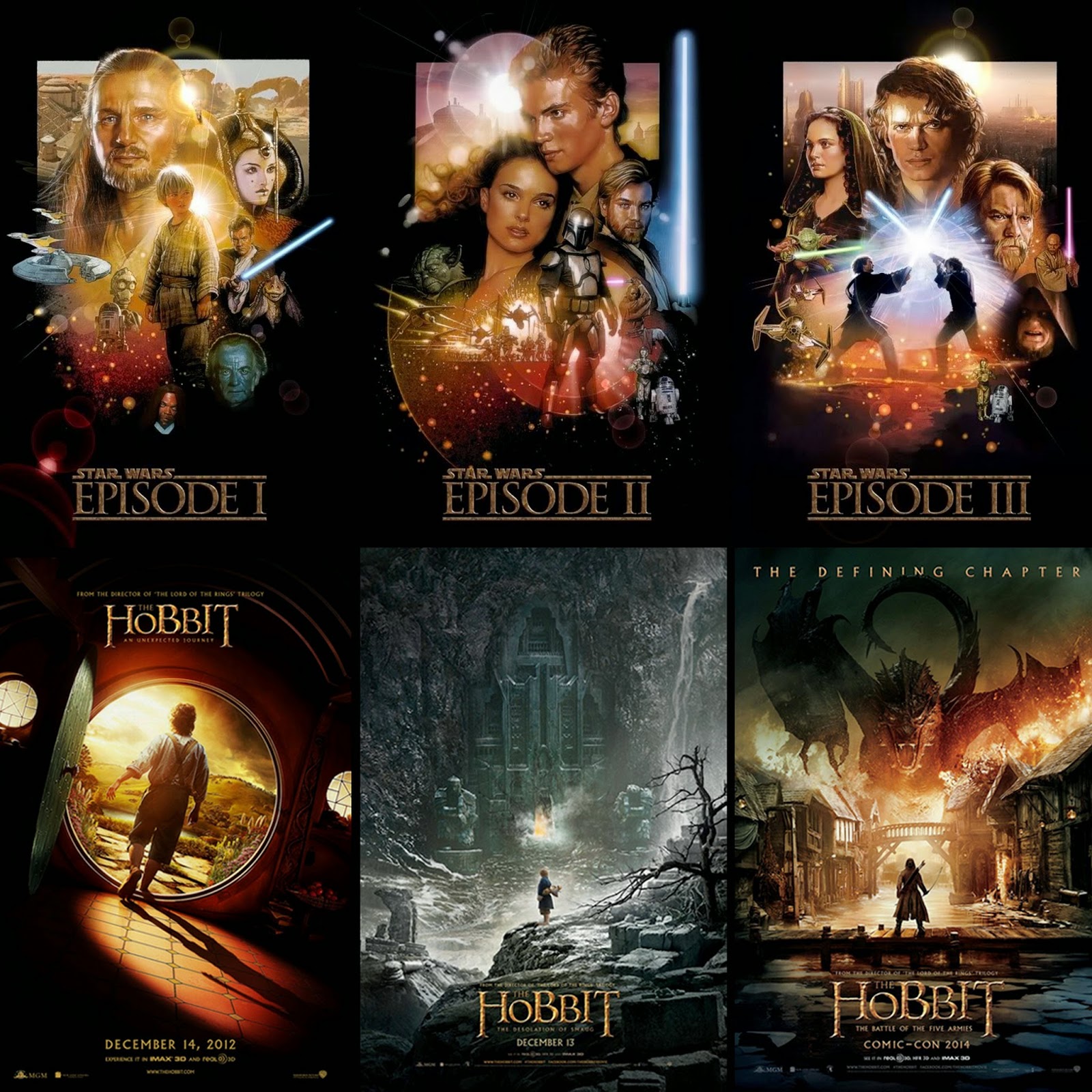 At this point, you've most likely made up your mind concerning Peter Jackson's Hobbit trilogy. A review of The Battle of the Five Armies isn't going to sway you one way or the other (which is why I have taken my sweet time writing it). Instead, this review will focus more on comparing this less beloved prequel trilogy with the less beloved prequel trilogy of Star Wars. To be clear, this is not some fanboy Wars versus Rings comparison a la Clerks II. This is more about how strange it was for me to experience (somewhat) what older fans must have felt when they first saw the Star Wars prequels. But first, some thoughts on The Battle of the Five Armies.

The title says it all for this one. There is indeed a very large battle, but it somehow lacks the impact of the big showdown at the end of The Return of the King. For whatever reason, even with nearly a decade's worth of technological progress, the battle in the film looks and feels more like a cartoon. There are still some awesome moments (a quintuple [or more] decapitation featuring Thranduil and his elk comes to mind), but none of it felt as momentous or real as before. It's all entertaining enough, though it completely confirms that this trilogy should have been at most two films. The battle feels so extended that it seems forgotten at certain points. That never happened with a battle scene from the original trilogy. All complaints about the magnitude and whatnot for this film are unfair, though, since this is a lengthy adaptation of a children's book. The problem is that Jackson and the rest of the filmmakers wanted to somehow marry a kids' film with the darker tone of The Lord of the Rings. So you get annoyingly goofy comic relief in the form of Grima Wormtongue ripoff Alfrid (the unkillable coward shows up every other scene it seems) followed by multiple decapitations. It all cancels out to make a mediocre experience. The kids' movie issue is where the comparison to Star Wars starts.

Full disclosure: I like the Star Wars prequels. They started coming out when I was fifteen, so maybe I was on a cusp that allowed me to love them while forgiving them for their more childish elements (like Jar Jar Binks, the Alfrid of the Star Wars prequels). The more likely reason I like the prequels is that I am a bigger fan of Star Wars than Rings. Regardless, both sets of prequels received criticism for being overly childish and CG-heavy.

Both series suffer from the same problem in that everyone already knows how great the story gets later on. Reverse story-telling is inherently flawed when the original films are so beloved. How could Episode I - III or The Hobbit compare to Episode IV - VI and The Lord of the Rings? Those movies were good enough to create empires unto themselves. For example, try to find a product that you can't get a Star Wars version of (while you're doing that I'll go make some toast with my Darth Vader toaster), and look at New Zealand, which will now be a tourist attraction forever thanks to Rings. When films are capable of that, you know there are going to be some grumblings when the filmmakers return to the well. I point this out because other prequels, such as the recent Apes and X-Men films, work because the series suffered some weak entries and lost their holy status.

That is a problem in itself. As dorks, perhaps it's time for us to listen to what people have been saying for so long: it's just a movie. Maybe we shouldn't treat these films as sacred documents. Who am I kidding? That's not going to happen. We're dealing with people who claim that George Lucas ruined their childhood by altering the original trilogy and making a the prequel trilogy. "Ruined" it! Anyone who seriously makes such a claim is not going to listen to reason, so let's try to understand why the prequels are hated by some.

First, the source material. The Hobbit truly should be viewed as a separate trilogy rather than the prequel to Rings. It was not created with the intent to give backstory to the events of The Lord of the Rings. Tolkien published the book in 1937, 17 years before Rings would be published. The Hobbit was meant to be a children's story, and it truly is. To be fair, Tolkien did go back and make edits to The Hobbit as he wrote Rings (reminds me of another creator who went back to alter the early material...), but he wrote the stories mostly in chronological order. Lucas, however, did the opposite, waiting almost as long between works (there are 16 years between Jedi and Phantom Menace). It's strange, though. Tolkien as a younger man wrote a children't story and followed that up as an older man with a more serious tale. Lucas as a younger man wrote a relatively serious story and followed it up with more kid-friendly trilogy as an older man. Perhaps this is all perspective. Maybe some view all of it as equally childish. I would argue that both sets of prequels are much more childish than the originals, however. It's just that it makes more sense for The Hobbit to be that way. When you think about it, though, it makes sense that The Phantom Menace was childish because it's about a kid. That trilogy matures with its protagonist/future antagonist. The (possible) problem with both is that the filmmakers wanted it both ways.

I've already stated my disdain for Peter Jackson's attempt to make a kids' movie that also features the graphic violence of the first trilogy. It was so tonally uneven that it became distracting. And the quality of the battle scenes suffered because they were given a less realistic look so as not to scar the children. Lucas gets crap for this, too. A lot of complaints about the prequels are aimed at the plot about trading blockades and bureaucracy. You have a farting camel creature in one scene followed by congressional hearing. The kiddie humor does annoy me a bit (though it is in keeping with the original trilogy, to a degree), but the government stuff was fine with me, especially since it was a kids' movie. Let these kids know from an early age that committees and negotiations are largely worthless compared to the Force. That's a good lesson in my book. Lucas gets bonus points for his violence, however. Jackson turned some of the battle moments in a cartoon, but Lucas shows a father figure impaled with a lightsaber and shows the villain sliced in half.

The problem that truly plagued both series is time. Star Wars waited too long. The hardcore fans weren't looking for a kids' movie because they weren't kids anymore. The Hobbit came out too late as well. It was never meant to be a prequel. There aren't enough unanswered questions from Rings that need answered in The Hobbit. Star Wars has the origin of Darth Vader, the fall of the Republic, etc. Sure, some people hated Lucas's answers for that, but at least there were questions in the first place. Did anyone go into The Hobbit not already knowing how Bilbo came across the ring? Or that Sauron was a bad guy on the rise? All of this was handled in the mini-prequel that serves as the intro to the first Rings movie. The Hobbit would have been better off it had been released when The Lord of the Rings came out. Then there could be the natural progression from kids' movie to awesome trilogy that everyone can enjoy. Instead, Jackson felt obligated to mimic his first trilogy.

That's the true difference here. Lucas wanted, and did, create a very different trilogy to varying degrees of success. Jackson wanted to create a very similar trilogy when he should have embraced how different it could have been. I think it would have been better if Guillermo del Toro had been able to direct it. Not because he's better than Jackson, but because he is different. This way of thinking is working out for Star Wars at the moment. Take Lucas out of the equation and now all the people with "ruined" childhoods are starting to get optimistic again. Here's hoping that the next trip to Middle Earth (I'm sure there will be one) doesn't include Peter Jackson. We're all thankful for what you've given us, but now let someone else take a crack at it.

Finally, I want to make it clear that I liked The Hobbit. But I loved The Lord of the Rings. The Hobbit finally allowed me to have that experience that the prequel haters had with Star Wars. Although I'm not about to claim these three movies "ruined" anything for me, I understand the feeling of disappointment now. It just didn't measure up to what I was used to. As for Star Wars, I won't apologize for loving the prequels. I hear all the complaints about Hayden Christensen and Jar Jar Binks and the CG and I get it, but none of that stuff bothered me enough to hate these films. Perhaps I'm just too much of a Star Wars fanboy. As for Rings, I'm not as forgiving. I never wanted to be that bitter fan who only holds the original trilogy in high regard. I like The Hobbit prequels, and I plan on buying the extended edition set when it's released (I sincerely want to know what was considered extraneous in this bloated trilogy). But I'm positive that when I want to return to Middle Earth, I'll almost always go with Rings. Because of The Hobbit, I now know what all those bitter Star Wars fans feel like, and I don't like it.
Posted by Eric Harris at 2:11 PM

Email ThisBlogThis!Share to TwitterShare to FacebookShare to Pinterest
Labels: George Lucas, Jar Jar Binks, Peter Jackson, prequels, Star Wars, The Battle of the Five Armies, The Hobbit, The Lord of the Rings