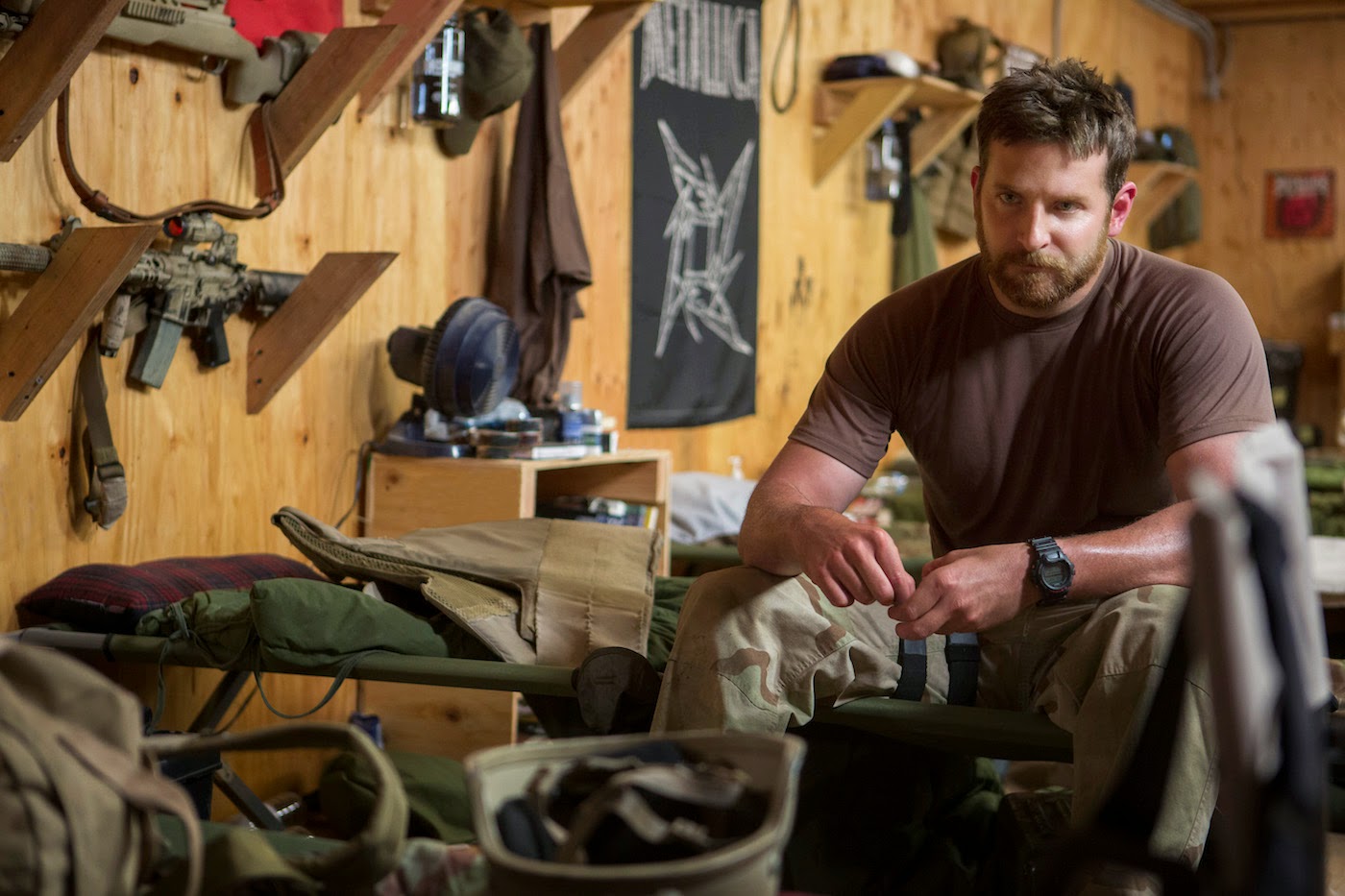 Movies based on true stories are always prominent during awards season, but this year it seems like overload. True stories are great for getting the audience to connect with the material (“This really happened!”), but they are also subject to controversy. The controversy isn’t about accuracy because no sensible person expects a 2+ hour movie to tell an entire life or event; it’s about changing too much (the common complaint about ), or it’s about the subject of the film in general (in this case Chris Kyle in American Sniper).

You will find very little controversy within American Sniper. But check the newspaper (the Evansville Courier ran a cartoon last week that essentially compared Chris Kyle to a terrorist), television (Bill Maher took issue with Kyle’s heroic portrayal), or the always happy internet (Google “Chris Kyle” and you’ll find results on the first page that refer to him both as a “hero” and a “monster”), and it is obvious that there is controversy about Kyle. The great thing about American Sniper is that you have to look for the controversy away from the film. It does not force the conversation on you. Some are degrading the film for that very reason, but it’s actually the best part about it. Plus, it is possible to come away from the film with complex thoughts and emotions (my wife and I certainly did); this is not some American brainwashing propaganda film.

American Sniper is based on the book co-written by Kyle about his life, military career, and acclimatization back to regular life. (Full disclosure: I have not read the book yet.) So while many people take issue with ’s involvement in at all, Kyle presents it as a noble endeavor. Because of that, this film is reminiscent of We Were Soldiers, the Mel Gibson film. That film largely ignored the politics of the war and presented a straightforward war film about the soldiers instead of the typical film that dealt with the politics and chaos of it all. Most movies about conflicts in the are almost solely focused on the politics of war as well, and, unsurprisingly, audiences don’t want to see that because the real events are still relevant and fresh in our minds. American Sniper, for better or worse, gives audiences what they want to see: a simplified version of the war starring a hero you can root for. Ask anyone who has seen the film, they will tell you it’s amazing. It seems that the regular audience member wants a movie like this, and I am inclined to agree with the masses on this one.

American Sniper, while too simplified (more on that later) at times, is an excellent character study anchored by a great, almost unrecognizable Bradley Cooper and tense, well-done action sequences. Cooper is the true standout of the film. It’s not my favorite performance of the year (mainly because I take issue with performances that are essentially impressions of well-documented famous people), but it is one of the most impressive transformations this year. (By the way, “year” still applies to 2014 since this came out in limited release in December.) Cooper disappears in this role mainly by bulking up, but it’s his voice work and mannerisms that impressed me the most. He’s been nominated for an Oscar three straight years now, but this is the first time he’s truly deserved it.

Cooper’s performance alone could carry the film, but thankfully director Clint Eastwood handles all of the war action quite well, showing everything in a very straightforward manner. The action scenes don’t attempt to place you in the war zone with a shaky camera and chaos. Instead, they are very traditional sequences, which is refreshing in this age of ultra-realism in movies. Eastwood also did a great job of portraying the paranoia Kyle felt back in . Scenes that would seem very plain under other circumstances, like a child’s birthday party, felt as if they were taken from a tense spy thriller. In fact, the scenes portraying Kyle’s PTSD were more effective than the action, which is a testament to Eastwood’s ability as a director.

As for the simplified treatment of the war, American Sniper presents Chris Kyle as a man who wants to join the military for purely noble reasons: to protect . There’s no question about whether it’s right or wrong for to be there. It’s not as if Kyle is the one who declared war anyway; he’s a soldier, so he goes. After that, the film is about him wanting to stay in to protect his fellow soldiers. This motivation was heroic enough, but they took it one step further and created a rival sniper known as Mustafa. (Slight SPOILERS until the end of this paragraph) This inclusion provided the war segment with a beginning and an end which takes away from the more interesting conflict in the film: what happens when the war ends? In the film, it makes it appear that Kyle has accomplished everything he needed to do, but that is too simple. It would have been more powerful for him to come home with things left unfinished in . The way it is in the film makes it seem like, “ accomplished, let’s go home.” I’m all for keeping this film simple and pro-soldier, but it’s hard to ignore that things did not end up all that accomplished in . Historical accuracy aside, it would be a much more powerful decision if Kyle returns home and has to make peace with the fact that things aren’t complete over there. This might seem like nitpicking, but it keeps the film from being as complex and interesting as it could be. This simplicity lessened the film for me. If it was more complex, it may have ended up being my favorite film of the year instead of just making my top ten (by the way, my top ten will be out in the next couple of weeks).

One last thing about the simplification issue others have with the film. A lot of people, like Michael Moore, take issue with how the soldiers in the film refer to Iraqis as “savages” throughout the film. This issue would make sense if it was done through narration or someone that is not involved in the war. Look at any number of documentaries from the Iraq war; the soldiers involved, whether they thought they should be there or not, do not go around referring to combatants as humans. Soldiers have to do the most inhumane thing you can do: they have to kill. It wouldn’t do well for the psychology of a soldier to stop him/her and say, “Let’s cool it with the ‘savage’ talk. That’s someone’s son trying to kill you.” Even if we should not be there, we cannot expect our soldiers to worry about being politically correct. To be clear, that doesn’t mean any wartime atrocities are justified. But it does mean that a soldier in a film calling a potential enemy combatant a “savage” isn’t all that upsetting or surprising. It’s necessary. Now, if I, a common civilian, refer to a group of people I have no personal knowledge of as “savages,” feel free to call me out for it. You’ll be right to do so. But soldiers have the right to refer to their enemies however they see fit to get them through a situation the rest of us are not involved in.

Despite some relatively minor issues, American Sniper stands out as one of the year’s best. People getting worked up either for or against the film need to take a step back from it and realize it’s not trying to rewrite history or anything. It is first and foremost a film. American Sniper is engaging, entertaining, tense, incredibly acted, and emotional. Perhaps it simplifies things a bit too much here and there, but that’s what movies are for sometimes, to take the complex real world and give us a story to connect to for a little while before we have to acknowledge reality again. And for those who take issue with that, the film could not ignore the unexpected, non-movie end to Kyle’s life. In fact, that final dose of reality is just the jolt the film, and the viewers, need after it’s all said and done. It left my theater in complete and utter silence, which it should be after dealing with a film about war and its effect on people.