"Dog Soldiers" - It's like "Trainspotting," but with Werewolves Instead of Heroin.

*I write these articles with SPOILERS.

I bit off a bit more than I could chew (pun definitely intended) this Halloween. I had hoped to include this movie and House of 1000 Corpses in October, but time got away from me. I watched both films and had outlines for both articles, but I just never got around to writing them. Rather than abandoning the articles or saving them for next year, I decided to just post them now. So here’s the first late Halloween article. 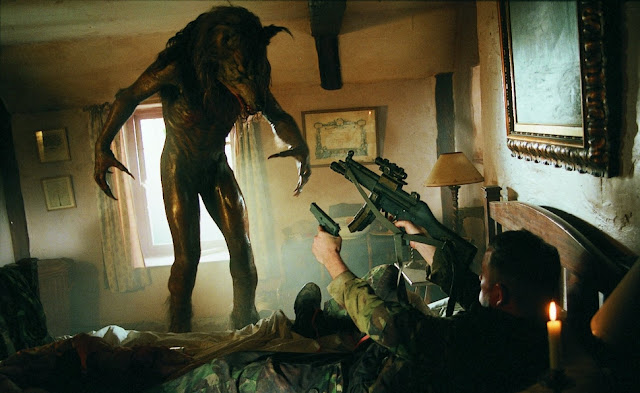 Neil Marshall was going to be the next big thing, right?

The Descent (a movie I’ll cover next year for Halloween) is the first Neil Marshall movie I watched, and I loved it. Naturally, I had to check out his first film. Dog Soldiers, while obviously a bit cheaper and a lesser movie overall, did not disappoint. It was brutal and goofy. This was a director to pay attention to.

His next movie was Doomsday, which is a movie I think I like. This is where things get weird with me and Marshall’s movies. I think I like the idea and promise of his films more than the actual films. I remember liking Doomsday but thinking it could have been so much more. Mad Max: Fury Road had not come out then, but that ended up being the movie I wanted Doomsday to be. But thinking back on it, I really want to watch Doomsday again to see if I’m wrong, and that it is actually pretty good.

Next came Centurion, a Michael Fassbender movie about a Roman legion behind enemy lines. I only know what it’s about because I just looked it up on IMDb. Once again, I remember liking this movie but not being blown away by it. After Centurion, Marshall worked more in TV, but he did direct the new Hellboy, so I need to check that out now.

My point is that Neil Marshall makes movies I like or should like, but I almost completely forget them. It’s the weirdest thing. This guy should be like John Carpenter to me, but something has failed to click. But I want it to. I feel like I’m somehow missing something with his third and fourth films.

The only other director I can think of that I feel this way about is Terence Malick. Hear me out. The first time I saw The Thin Red Line and The New World, I hated them both passionately. But part of me wanted to like them. So I kept revisiting them to the point that I now love both films, and I loved The Tree of Life the first time I saw it. With Malick, I kept revisiting his films because he was regarded as this genius, and I just didn’t get it. Marshall isn’t that well-regarded, or known, for that matter. But his sensibilities are exactly what I look for in movies, so I keep coming back to these movies hoping something clicks and I finally feel like I truly love his work.

I’m giving Doomsday and Centurion one more try. If I don’t see the light, then I’ll make my peace with the fact that I only like two of Marshall’s films, even if I should celebrate his entire filmography. 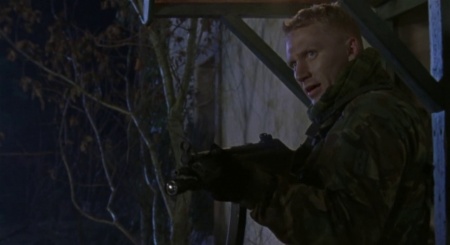 Dog Soldiers, aside from being a werewolf movie, is also a very Scottish movie. And by Scottish, I mean “turn on the subtitles” Scottish. This, along with the casting of Kevin McKidd, made me think of Trainspotting.

Even though the main characters are soldiers, they respond to the existence of werewolves in a matter-of-fact way. Imagine how Sick Boy would respond if he saw a werewolf suddenly burst into a room and kill Renton; he would freak out, but he would also be a smart ass about it. That attitude is what sets this film apart from standard werewolf movies.

But thinking about this movie in regards to Trainspotting just makes me want to see an actual Trainspotting movie with werewolves. Who wouldn’t want to see Begbie take on a werewolf in a bar? And the werewolves could be metaphors for each character’s addiction. If they survive, they get clean. If they die, they succumbed to their addiction.

The beginning of Trainspotting could work as a werewolf movie, as well. Instead of the cops, they’re all running from werewolves. And Renton’s voiceover can be changed accordingly, “Choose staying inside during a full moon. Choose keeping silver weaponry on your person at all times. Choose running as fast you can away from bloody werewolves. Choose life.”

Honestly, I think I might’ve bought this on Amazon when I was drunk one night a few years ago. I mean, I like it, but I do not know why I thought I ever needed to watch this again. 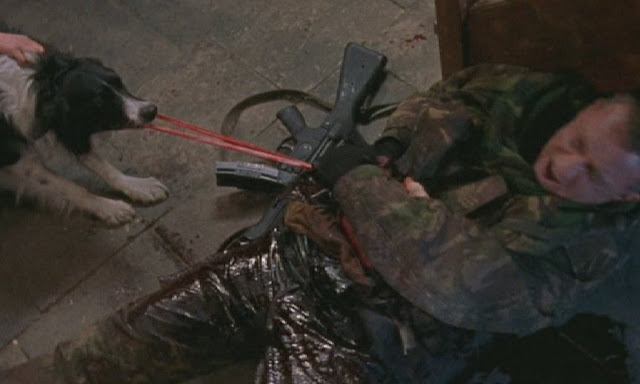 Apparently there's a special edition of this but I have the bare bones version. The IMDb has most of the stuff from Marshall's commentary, though, so I'll stick with this version.

Marshall never liked the title screen because he thought it looked cheap. I agree.

The killing a dog as the final test is the same thing from Kingsman, isn't it? Did they get that from this? Oh, and Liam Cunningham is serious about it.

Having someone shoot a dog for no reason is a good way to signify that character is a villain.

That story the sarge or whatever tells around the fire about his buddy getting blown up is the darkest story about an ass tattoo ever told.

Forgot about Cunningham getting puked on. That's one way to keep someone from shooting a dog, I guess.

During one attack, a soldier throws a stick and tells a werewolf to fetch. That's why I like this movie.

“Ryan, have you tried licking your own balls yet?”

So did The Hangover steal the pictures during the credits gag from this movie?