"Zombieland" - This Was a Lot Funnier a Decade Ago.

*I write these articles with SPOILERS.

Combining my usual line up of Van Damme, western, and comedy with Halloween month meant finding a horror comedy this week. I decided to go with Zombieland because of the recent sequel and because I haven’t seen it in years. Overall, I still enjoyed the film, but I also think it is very much a movie of the time. I hate to always bring up The Walking Dead when writing about zombie movies, but this coming out before that show premiered made it more enjoyable than it is today for me. I’m kind of burnt out with all things zombie right now thanks to The Walking Dead (a show I only watch out of habit at this point). Rewatching this reminded me of a simpler time when zombies were only in movies. I like a lot of The Walking Dead, but I wish it never happened at this point. They flooded the zombie market and now good zombie movies are not as special because zombies are everywhere. A zombie movie used to be a relatively special thing, but now zombies are everywhere, and I just don’t care as much. Oh well, at least I’ll always have the Romero movies. Those classics can never be tainted by zombie popularity. 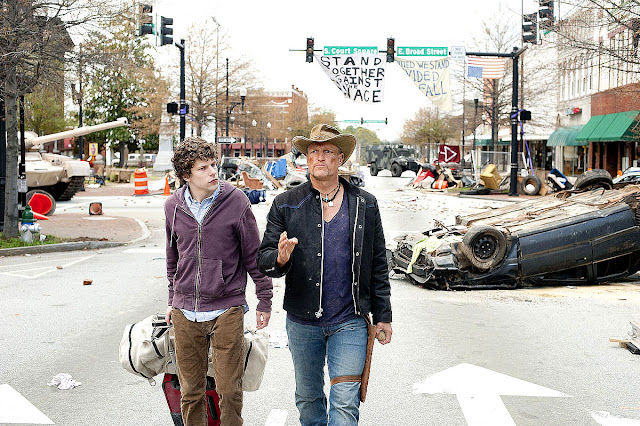 The Fact That I Don't Have Much to Say About This Movie Says It All.

I don’t have a lot to write about this movie, mainly because of what I mentioned above. When I first saw this movie, it felt like a fresh idea. Comedy (intentional and unintentional) has always been a part of zombie movies, but this is one of the only straight up comedies (Return of the Living Dead falls into this category, as well, and is much funnier). What makes Zombieland stand out a bit is that the zombies never seem to pose a real threat to the characters. Sure, they get in hairy situations, but at no point did I think any of the leads was going to die. That’s rare in a zombie movie.

The comedy aspect makes Zombieland interesting, but it also makes it forgettable. I like laughing at zombies, but I also want a bit of realism. It feels stupid to write this, but zombie movies are funnier when the zombies are treated seriously. Turning them into clowns (literally in this film) takes away from the humor.

Because of this, Zombieland is a movie of the moment for me. By that, I mean that when it came out I loved it. I thought it was hilarious. But a decade later, the comedy just made me smirk here and there. Nothing really made me laugh. This is the case for most comedies, so I’m not saying Zombieland is especially dated or anything. But I do bring it up because of the sequel. If a Zombieland sequel had been released, say, seven years ago, I would have made a point to see it opening weekend. Ten years later, I really don’t care about the sequel, and I plan on only watching it once it’s on video, preferably on a service I already have so I don’t have to spend extra money to watch it. As a zombie fan, that saddens me, but that’s the zombie world we live in now.

Zombieland Works Because It's Like Someone Made a Movie Based Off a Dorky Conversation About Zombies.

Despite my less than enthusiastic feelings about the series now, Zombieland is still a decently enjoyable movie (put that on a poster!). I still like it because of the basic premise, which is, “What if we did as much funny shit to zombies as we can think of?” As a dork, I have had many conversations over the years about what I would do in a zombie apocalypse. The real answer is “die in the first wave,” but I liked to humor myself and think I would be one of the survivors. In that scenario I would start thinking of funny ways to kill zombies, looking for celebrity zombies, visiting places I once enjoyed now that they’re deserted, etc. Zombieland covers all that stuff, which is why I still like it. Add to that the rules of the film, and you have a zombie movie made for zombie movie dorks.

It seems like there are still a lot of possibilities for humor in a zombie-filled world that are unexplored in Zombieland. Perhaps I should be excited for the sequel, but I get the feeling that Double Tap is just going to be more of the same with a few new characters added. But I’ll eventually give it a chance, and hopefully I’m wrong, and the film addresses some new avenues in zombie comedy.

This is one that I bought back in my "must buy a movie every week" phase. I'm glad I have it to revisit, especially since I forgot most of it, but if this came out today I would not feel the need to own it.

The double tap rule should apply to every movie. Just make sure the monster or killer or whatever is dead with a few extra shots.

"Can't a guy take a dumper in peace?" First off, I like that Mike White calls it a "dumper." Second, all that happened was someone else entered the public restroom. So one is allowed in if Mike White is taking a dumper? How would anyone know?

That credits sequence is still funny and awesome.

My favorite scene from the title sequence is the tuxedo dude shooting. What is the backstory there? Why is he wearing a Casablanca tux in an outdoor industrial setting?

"You almost knocked over your alcohol with your knife."

The power is still on in a lot of places in Zombieland. I've wondered about this for a while. Would the power grid just go out in the event of a zombie apocalypse? Or would it stay on until a storm took it out? Based on how often the power goes out without zombies around, I'd say it's much more likely that the power would be out once the undead did rise. I like that the lights still work in this movie, though. I don't like it when zombie movies/shows are overly dark.

The list of people that were offered cameos is awesome. Swayze, Van Damme, Pesci, Hamill, The Rock, Bacon, McConaughey. Why in God's name did Van Damme turn this down?!

Totally forgot about the gag of Eisenberg taking off on a motorcycle and immediately crashing. That was definitely a good call. I would never believe that he could ride a motorcycle.


The power being on is essential to the ending of this movie since they end up at the theme park, but that also makes it insanely stupid. What did they expect was going to happen when they turned on an entire theme park?
Posted by Eric Harris at 5:11 PM