You probably noticed already that I have changed the name of the blog. I bought the domain name for http://www.canneltoncritic.com/ and that address will now direct you to this blog. The old way still works, I just thought this new name made more sense and made it easier to get to the site. In hindsight, Middle of Nowhere seems a bit more cynical that I wanted it to be and it was a spur of the moment title anyway. Also, even if Cannelton Critic comes across as a little pretentious, I still like the sound of it, and I paid for two years for the domain name, so I'm keeping it. Now onto my reviews, which could be considered my Best Actress roundup, since all three films featured nominees.

"Doubt" is the story of Sister Aloysius Beauvier (Meryl Streep) and her doubts about Father Flynn (Philip Seymour Hoffman) and his relationship with a boy in their Catholic school during the mid 1960s. This is a movie that hinges on strong performances and it delivers. Of course you cannot go wrong with Streep and Hoffman, and Amy Adams turns in a strong performance as well. But this is Streep's show. I've never seen an actress so capable of insighting my anger so easily. She is so strict and so sure of herself and it is so infuriating. But it can be a bit funny, too. Her obsession with the use of ball-point pens and a debate on the deeper meaning of Frosty the Snowman help to lighten the mood of an otherwise serious film.

Streep smacks kids in the back of the head, yells at them, and just has a general look of disgust 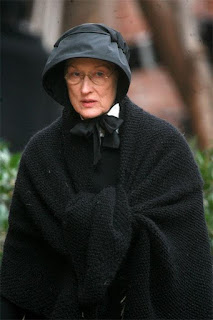 and suspicion molded onto her face. This is in keeping with certain nuns from that time, I am told. So this film could be a bit nostalgic (or horrorific) for certain audience members. I didn't go through that form of school, so it all seemed a bit comedic to me, especially from a teaching standpoint. But Streep embodies this character and even though she's won before, I think she deserved the Oscar (though I haven't seen Anne Hathaway's performance yet). Hoffman turns in yet another impressive performance, though it might just seem impressive because he held his own against Streep.

The performances are so important because this film is truly about doubt. Do you believe Streep or Hoffman? Do you side with Hoffman simply because Streep is so mean? Do you side with Streep because of your preconceptions of the Church these days? This film is about what you bring into it, which makes it very interesting. It's always great when a film can be entertaining while it makes you question your beliefs and forces you to make a decision. The performances are so important because the actors need to try to sway your belief but you also have to be able to doubt them. I may have mentioned my hate for Streep's character, but her certainty is infecting and I found myself seeing eye to eye with her a few times. That may be the most important part of her performance; you might hate her, but she makes sense.
The performances do make this film (which is adapted from a play, which would explain why the acting is so important) but the writer/director, John Patrick Shanley, does try to make it visually appealing. There isn't anything amazing about the style, but it works. Shanley tilts the camera a few times to create the feeling of uncertainty and that works, but the subject matter doesn't really need any help.

"Changeling" is about a single mother, Angelina Jolie, who loses her son, only to have a fake 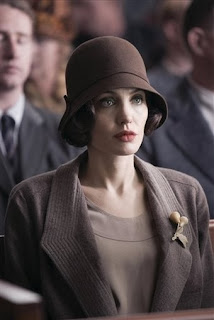 replacement son brought to her from the L.A. Police Department. She then gets embroiled in a political situation spurred on by a local priest, John Malkovich, in which corruption is dealt with. Oh, and Angelina Jolie screams that she wants "MY SON!" about a hundred times throughout all this. I can't say that she does a great job. She cries a lot and yells about her son, but she just annoyed me more than anything. It might have had something to do with those stupid hats she wears in nearly every scene. I guess women wore hats like that 70 years ago? Accuracy is fine and all, but those stupid hats got on my nerves...not sure why.

The film is directed by Clint Eastwood (who seems to be obsessed with misery in his old age) and he creates a nice feel for this period piece. But I just don't usually care for period pieces that take place in L.A. Not sure why, I just don't like the way that city and its people are portrayed when dealing with the past. It has its interesting moments, though. Jolie's sanity is questioned a bit, but it isn't focused on enough to make this film entertaining. It becomes an overlong (140+ minutes) story that cannot decide whether it wants to be a kidnapping, political, pyschological, or a mystery story. I would've liked at least one of those elements fleshed out, but instead they took a quantity over quality approach and, for me, it failed.

"Frozen River" is also about a single mother, Melissa Leo, in miserable conditions. She is trying to buy a new double wide for her two sons, but her husband has stolen the money and ran off to gamble with it. She ends up getting involved in human trafficking across the U.S./Canada border (she drives them across the frozen river from the title). Does this sound miserable yet? It is, but it surprised me by being interesting and compelling when I expected it to be one of those films that just piles one horrible situation on top of another and another until you feel so awful that you want to turn the movie off. But it isn't one of those films. The characters are too well developed. You want Leo and her unlikely partner in crime, Lila, to succeed. You want their lives to improve, even if they have to do some questionable things to make it work. 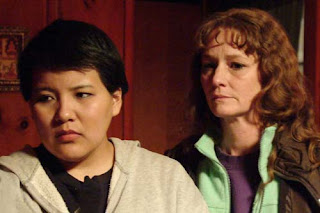 I suppose I'm focusing on the possibility of the film being depressing, but the moments Leo has with her children and the friendship she develops with Lila really bring this movie out of the darkness. It's actually pretty hopeful in the long run. So check this one out. Melissa Leo was nominated and she is very convincing in her role (this woman looks rough) and without her the movie could have failed. But she turned in a great performance and made this into a pleasant surprise.

Next: I think I've seen enough to give a Top Ten this Sunday. Might add a review of "Choke" as well.
Posted by Eric Harris at 9:23 PM