Okay, quite a bit this week, but I felt like I should write about all three of these rather than space it out. First up is Slumdog Millionaire, which is probably going to win Best Picture in a week.
Slumdog (dropping the Millionaire because I don't feel like typing it twenty more times) is the story of two brothers, Jamal and Prem, who grow up in the slums of Mumbai (or Bombay, 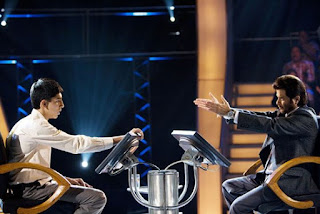 depending on the time period). They witness riots over religion, they find out how to survive as poor children, and Jamal discovers love at first sight. All of this is told through flashbacks as Jamal is questioned about how he could possibly know all the answers to Who Wants to be a Millionaire. He's down to final question and he's in between shows. So we watch each question and then it flashes back to how an uneducated "slumdog" knew the answers. I thought this was a decently clever way to tell a story, even though I thought it sounded kind of cheesy when I read about it. It works and it builds suspense and tension throughout. Jamal becomes likable through all this and I was interested in his story.
Danny Boyle (Trainspotting, Sunshine) directs this in his usual style. Things are frantic at times, music seems perfect for each scene (M.I.A.'s "Paper Planes" is used better in this than in the Pineapple Express trailer), and he creates a number of impressive shots, such as the scene with Jamal and Prem overlooking Mumbai. I really won't mind if he wins Best Director, he deserves it for past films and this one is worthy of the award as well, even though the same could be said for David Fincher.
But is this the best film of 2008? I say no. Actually, it's not in my personal top ten for the year (I might write up my top ten in a few weeks, once I've been able to see more 2008 movies). But I am not surprised it's nominated. There's a feel good quality to this film even though it covers some serious and depressing things. That's how audiences want their depictions of the poor areas of the world to be, though. Don't make us feel miserable or guilty, show us the misery and then show that it's all okay, anyway. That's all well and good, but I don't think that message makes this film rise above the likes of Benjamin Button or The Wrestler. Personally, I prefer City of God when it comes to what slum life can be like. City of God is more entertaining as well, so I'd suggest that over Slumdog any day of the week. So that's Slumdog, misery and poverty wrapped up with a feel-good bow on top. So give it the awards, as long as Boyle gets his for Directing, I'm okay with it. Not happy, but worse films have won (Crash, Chicago, Shakespeare in Love...). Just to reiterate, this is a good, entertaining film, I just think it's overrated. 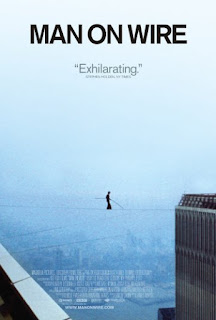 Now to the two documentaries. First is Man on Wire. This is about Phillipe Petit, the man who walked a tightrope across the two World Trade Center towers in 1974. What makes this documentary so entertaining (and what is earning it so many awards) is the fact that it is made almost like a heist film. Using recreations and archive footage, you get the feeling that these guys are planning a bank robbery; you have fake names, disguises, clever ways of sneaking material and people in, the suspense of security finding out. That is why this film is so easy to watch, but the subject material is fascinating as well.

Petit is kind of an enigma. There is no reason for him to walk across these structures, he just expresses some kind of need to do it. And the man himself is crazy enough to be entertaining in his interviews for the film. There's not much more I can say for this. It's fun, perplexing, and it features some great shots, archival and recreated (at times it looks like he is walking on air). It's on DVD right now, so there's no reason to miss this one. As for the special features: more interviews, a strange animated short aimed at elementary students (and narrated by Jake Gyllenhaal), and an old documentary about Petit walking across a bridge in Austrailia. The last feature is the most interesting, and you get to see where all of the excellent footage from the main film came from. 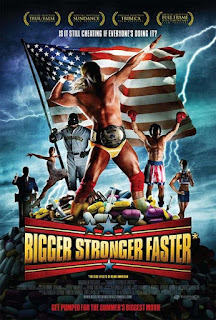 Second of the documentaries is Bigger, Stronger, Faster. This is a film made by Chris Bell, a New York native who was born small and dreamed of being just like Hulk Hogan and Arnold Schwarzenegger. He and his brothers, Mad Dog and Smelly (nicknames of course, but it's easier to follow them by these names), grew up hitting the weights and dreaming of the glory of the football field, the wrestling ring, and competetive weight bench. Mad Dog and Smelly resort to steroid use, while Chris tries doing it natural. This gets him thinking about American culture and the fascination with being bigger, stronger, and faster.

Today more than ever, if you hear the word steroids you instantly think of baseball, but this film does a good job of covering the other areas of steroid use. Bell talks a bit about baseball, but he also goes to the gyms, the football field, the air force; in other words this is not some topical film just about baseball made to get a quick buck while it's popular. This is truly about steroids, the bad and surprisingly, the good. Maybe not good, but at least a question as to why they are so demonized. It is interesting to see statistics in death and injury in relation to other drugs, and the true side effects that are actually not permanent (except for some of the female side effects). There are tons of questions raised in this, why aren't the long term effects being researched, why is Congress spending more time on this than health care, is the use of steroids cheating? There are no clear answers because most of it comes down to opinion. But it's still interesting to discuss it all.

But this film is not all about the possibility of steroids being useful, it also covers the damage they can do. It's not so much about the physical effects, but the emotional. Bell talks candidly with his brothers, his parents, and his in-laws about what steroid use has done to the family and it is not pretty. There are definitely some problems in his family in regards to steroid use, but the question is whether or not it all really matters when you're in America. Because it's all about winning and the image of winning. It's what people want. Maybe that's not completely true, but when you look at the issue, you definitely see something inherently American about the entire situation.

If you're into Michael Moore style docs, then this one is for you if all of the above stuff doesn't appeal. Bell isn't as confrontational as Moore, but he is just as entertaining. The truth behind before and after photos and supplements was great. He found some great archival footage and his childhood love of wrestling and action movies is something that the kid (and adult, to be honest) in me can identify with. It may get a little political and uncomfortable at times, but it never becomes boring.

As for the special features, I don't know about them because I watched this instantly off of Netflix.

Next Week - I may get around to watching Friday the 13th next week, and I'll review either Milk or The Reader (or both) as well.
Posted by Eric Harris at 9:30 PM