**I''m posting this review earlier than I normally would and that's because of the holiday weekend coming up. I don't plan on reviewing another film or writing a new article until next week.


Public Enemies, the latest from director Michael Mann (Heat, Collateral), is a strangely quiet mess of a movie. I expected the story of popular outlaw John Dillinger (played by Johnny Depp in a toned down but enjoyable performance) to be more cinematic and interesting. Instead Mann decides to go with his usual painful use of HD cameras which make the film look like it was shot 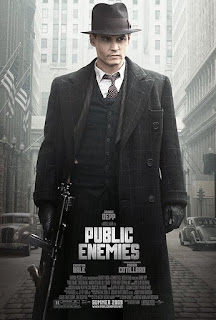 It all starts interesting enough. Dillinger breaks out some old accomplices from an Indiana state prison. There’s muted quality to the early scene which creates a bit of tension. That awkward silence continues on throughout the film, however. Moments later, in fact, Dillinger is clinging to a mentor figure being dragged by the getaway car. Should be a slightly loud, suspenseful scene, right? Wrong. It’s a very quiet scene in which the car and dragging sound effects are almost nonexistent. This is just one example of many. I don’t know what Mann’s intention was with this. Maybe he was trying to make things more emotional or trying to add to the 1930’s feel by showing how quiet the world once was. Either way, it didn’t work for me. It just distracted me and completely took me out of the movie.

As the film continues I became very aware that the sound issues had nothing to do with creating a 1930’s style for the film. Aside from the cars, clothes, and guns, this film seems to try to feel modern. Mann keeps the camera at shoulder level within groups of people, which does help to make you feel like you’re part of the action at times, but I don’t want that feeling when Dillinger is in a restaurant. I desperately wanted a nice standard establishing shot showing off a reconstructed 1930’s era Chicago. Maybe that is too normal and plain for Mann, but it would have made his stylistic camerawork much more impressive if there was something to compare it to. 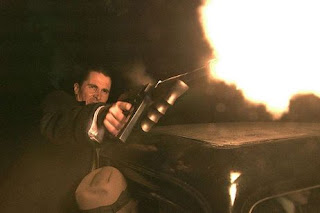 That said, the “down in the trenches” style is great for the action in this movie. Some of the Tommy gun shootouts are brutally impressive and, along with the cast, they keep the film from being flat out awful. When G-Man Melvin Purvis (played with stone-faced dedication by Christian Bale) faces off with “Baby Face” Nelson (an aptly cast Stephen Graham), it’s entertaining and exciting. History buffs will notice some inaccuracies with some action scenes and the general timeline, but the changes aren’t monumental enough to hurt the film. Mann hurts the film plenty enough on his own.

The cast helps to keep this film afloat as well. The beautiful Marion Cotillard continues to impress as Dillinger’s faithful girlfriend Billie Frechette. Depp and Bale are fine, though no one will ever claim these to be their best roles. Bale’s character was really weak, leaving the actor to show determination in every scene. We get no sense of who he is. Purvis should have been played by a no-name actor and his character should have been cut dramatically to leave the focus completely on Dillinger (which it mostly is anyway). That would also have saved plenty of money for the budget which could have allowed for more period piece elements.

There is one surprising element in the cast that adds to the 1930’s era, however. That element is Billy Crudup as J. Edgar Hoover. I am a big fan of the “old timey” voices from old films and Crudup nails it here without it sounding too cheesy. I enjoyed every scene he was in and was left 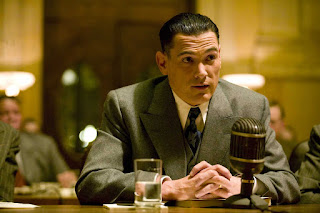 wishing his role was larger. Hoover sadly disappears for the last third of the film, though. This is especially upsetting since I felt like I knew more about Hoover’s character than anyone else’s, including Dillinger. The screenplay seems to require that the audience brings with it preconceptions of Dillinger rather than establishing them. I never really saw the motivation behind Dillinger’s actions, rather I just accepted them.

There is a good film here somewhere, it’s just that Michael Mann’s style, which is suitable for present day films like Collateral and Miami Vice (though even in those films the use of HD cameras annoys me), is horribly out place for a period piece like this. Public Enemies should have been a visually arresting (instead of disgusting), entertaining film, but Michael Mann and his distracting camerawork got in the way.

*I want to expand on an issue or two here, starting with the sound again. Not sure if it was the movie itself or the theater, but the sound seemed to fade in and out at times. A character would be speaking so low I couldn't understand him/her, then it would be too loud, even though the character hadn't started yelling or anything. Same goes with some sound effects as well, like gunshots and whatnot. I also need to address a couple more of those "strangely quiet" scenes. The first is when Depp and Cotillard are dancing. The only thing you can hear for a part of the scene are the shuffling steps of the dancers. Shouldn't the song being played be more apparent? What is the point of that? Later, at a crowded horse race, Depp and Cotillard have conversation and only their voices can be heard. I don't want the sound of the crowd to drown out conversation or anything, but it should certainly be there in the background. It took me out of the movie completely. Maybe this sounds like petty stuff, but just watch the film and tell me you don't notice those strange aspects of it.
Posted by Eric Harris at 12:44 AM